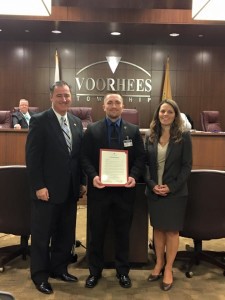 It was a typical day for Cherry Hill resident Anthony Maggio. In September, the 15-year-old rode his bike to the Dunkin Donuts on Burnt Mill Road like he did most days with friends to do homework and drink coffee. Except this day, when he walked out the door about to go home, his bike was gone.

“I felt really violated, honestly,” he said. “I know people steal things, but it was very expensive and meant a lot to me because that was my way of transportation around my neighborhood.”

Maggio called his mom who told him to call the Voorhees Township police. Ten minutes later, a police officer showed up and took his information and description of the bike. At that point, Maggio said he was heartbroken and thought he wasn’t getting his bike back.

A few days later, Investigator Michael Perez was assigned Maggio’s case and headed to Dunkin Donuts to obtain the surveillance video. He was able to identify the suspect right away, something he said was a “stroke of luck” because of run-ins with him in the past. Perez interviewed the suspect, but he wasn’t forthcoming about where he took the bike.

“For about three days, I searched every area he normally congregated, but I wasn’t getting anywhere,” Perez said.

The case was closed, the suspect was charged, and Maggio was advised of what happened, but that didn’t sit well with Perez.

“I didn’t think the case was truly closed because the victim didn’t get some sort of justice,” he explained. “I think the fact that the kid was so young, I didn’t really want to close the case until the kid had a bike.”

Three days after interviewing the suspect, Perez went the extra mile and set up a GoFundMe page to raise money to purchase a replacement bike for Maggio.

“I had never done this before and was a little leery, but at that point I thought, let’s just see where we can go with this,” Perez explained. “I spread it throughout Facebook, and they spread it to their connections.”

Within a matter of two weeks, Perez received $515, which was more than the goal he requested of $500.

“I was very surprised,” he said. “It was actually a pretty awesome thing considering something as simple as a story like this; we were able to bring so many people together who didn’t know this kid.”

While the fundraising was happening, Perez did more research. He wanted to not only replace Maggio’s bike, he wanted to give him a newer model. He reached out to Maggio’s mother, Antionette, to tell her of his plan and needed her help to make sure he was picking the right bike. Perez had one more trick up his sleeve — he wanted all of this to be a surprise for Maggio.

“I was in shock,” Antoinette said. “I was very surprised because I know how expensive that bicycle was. I had to keep this secret from my son, and it was not easy.”

Once the bike was purchased in mid-October, Maggio received a call from the police department saying he had to come in for “questioning.”

“We walked into the big room, at least 10 or 15 police officers were there, and I was confused because I was like OK, if he wants to question me, why are there this many people in there?” Maggio recalled.

As he wondered what was happening, the police officers took a large paper bag off the new bicycle for the reveal.

“I was shocked,” he said. “I didn’t know the police officer even cared that much about it. Usually when you hear about these kinds of situations, people get their stuff stolen and they don’t get it back. He was looking out for my best interest. My jaw dropped; I had no words. I still have no words to this day about it.”

They also provided Maggio with a helmet, light and a lock, so he never loses his bike again.

The Voorhees Township Committee made sure Perez’s good deed didn’t go unnoticed and awarded him a proclamation on Nov. 14.

“Investigator Perez went above and beyond the call of duty by making this young man’s life a little better,” Mayor Michael Mignogna said. “I’m so proud of Investigator Perez and our entire police department. They not only protect and serve Voorhees, they immerse themselves into the community and touch the lives of our residents, especially our children.”

“Officer Perez’s efforts are a direct reflection of who he is as a person and speaks to the character of our entire police department,” she said. “To see them and our residents work together to help Officer Perez collect donations to replace the bike was not only a generous effort, but a joint effort by our police and our community. This is just one of the many things that makes Voorhees the special place that it is. I was humbled by the response from Officer Perez. He went above and beyond for a young man that he didn’t even know.”

Perez was hesitant about being acknowledged at first, saying all he did was set up a fundraising page, and the community did the rest.

“Honestly, I was a little reluctant, but the good thing about being recognized is that the people did their part as neighbors and part of a community, so they are being recognized, too.”

Perez also credits his fellow police officers and the administration for being on board with his idea from the get go and for paying it forward.

“I can say that, my chief and his administration, they’ve always done right by me, which in turn allows me to do right by others,” he said.