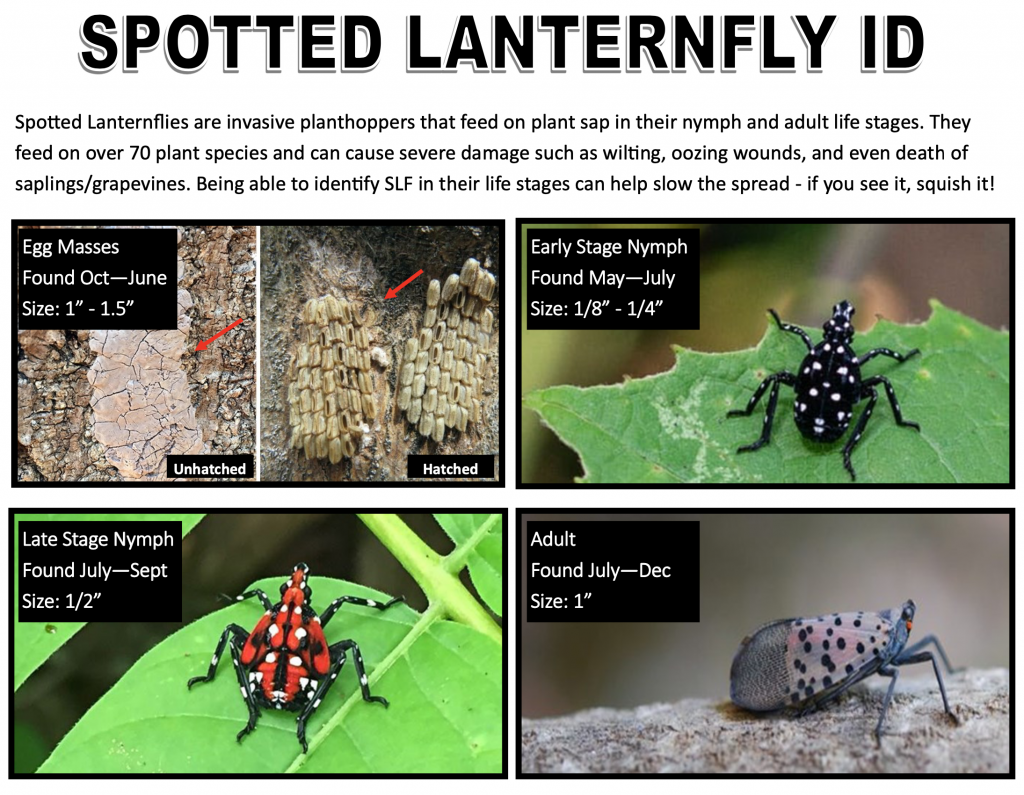 Their eggs may have hatched but Burlington County Parks officials say there’s still time to beat back the bugs before they grow into winged adults.

As part of the fight against the bug, the Burlington County Parks System created a spotted lanternfly information page on its website with tips on how residents can recognize and eliminate the plant-destroying invaders. Most of the bugs are still in their nymph stages and cannot yet fly, so experts say the next few weeks could be critical to efforts to try to control the population and prevent more damages to local vegetation and crops.

“We began recruiting volunteers to help us battle the lanternfly infestation this winter and spring because we wanted to protect our scenic parks, forests and farms,” said Burlington County Commissioner Linda Hynes, the Board’s liaison to the Department of Resource Conservation and Parks. “Our fight is continuing into the summer as we try to eliminate as many of these invading insects as possible before they take flight and spread even farther across our county.”

For those unfamiliar with the pesky menace, the lanternfly is an invasive, non-native insect from Asia with an appetite for fruit trees, ornamental trees, woody trees, vegetables, herbs, grapes and vines. Infected plants are recognizable because the bugs excrete a sticky mess on leaves, branches and bark that tend to make the plants appear to ooze or weep. Some may even develop a fermented odor.

The bugs were first sighted in Burlington County in 2019 and wound up being spotted in all 13 of the County parks last year, with significant numbers reported within Amico Island Park in Delran, Pennington Park in Delanco and Boundary Creek in Moorestown.

Sightings have become so widespread that Burlington County is now considered a quarantine county with Camden, Gloucester, Hunterdon, Mercer, Salem, Somerset and Warren. Sightings in those counties do not need to be reported to the New Jersey Department of Agriculture, but residents and workers are encouraged to inspect their vehicles, trailers and other outdoor items when driving to a location outside the quarantine zone.

Residents are also encouraged to be on the lookout for the bugs during all their life cycles and attempt to kill them if able.

To help battle the bug, Burlington County began recruiting volunteers to actively search for and scrape lanternfly egg masses from trees in parks and other properties. More than 180 people signed up and contributed over 200 hours to the effort and helped destroy more than 7,000 egg masses. That amounts to between 280,000 to 350,000 less nymphs.

Despite those efforts, Parks officials report a significantly larger lanternfly nymph population across the County compared to last summer.

While that news may be discouraging, Hynes said the fight against the bug continues and residents are still encouraged to do what they can to try to eliminate nymphs and mature adults lanternfly they encounter.

One suggested natural method to eliminate nymphs is to spray them with a mix of dish soap and water, with the suggested ratio of 2 ½ tablespoons of detergent in 1 gallon of water or as much as 10 tablespoons per gallon.

Another common trap is to place Pine Sol or another brand of all-purpose cleaner in a bowl with two packets of sugar. The scent of the mix attracts the nymphs and they should drown in the water bowl.

Links to additional trap designs and information can be found on the Burlington County Parks’ lanternfly resources page at: www.co.burlington.nj.us/DocumentCenter/View/13719/Spotted-Lanternfly-Resources

“The lanternfly invasion is a threat to our county’s parks, farms and natural forests and habitat and they continue to grow and spread,” Hynes said. “Our County is in this fight for the long haul and we’re asking for everyone’s help to stem the tide and keep this invasive pest from damaging many of the trees, plants and crops we love here in Burlington County and across New Jersey.”

‘Everyone is always welcome’