Mt. Laurel police increase patrols for Drive Sober or Get Pulled Over

Department’s annual impaired-driving crackdown is in place until Jan. 1 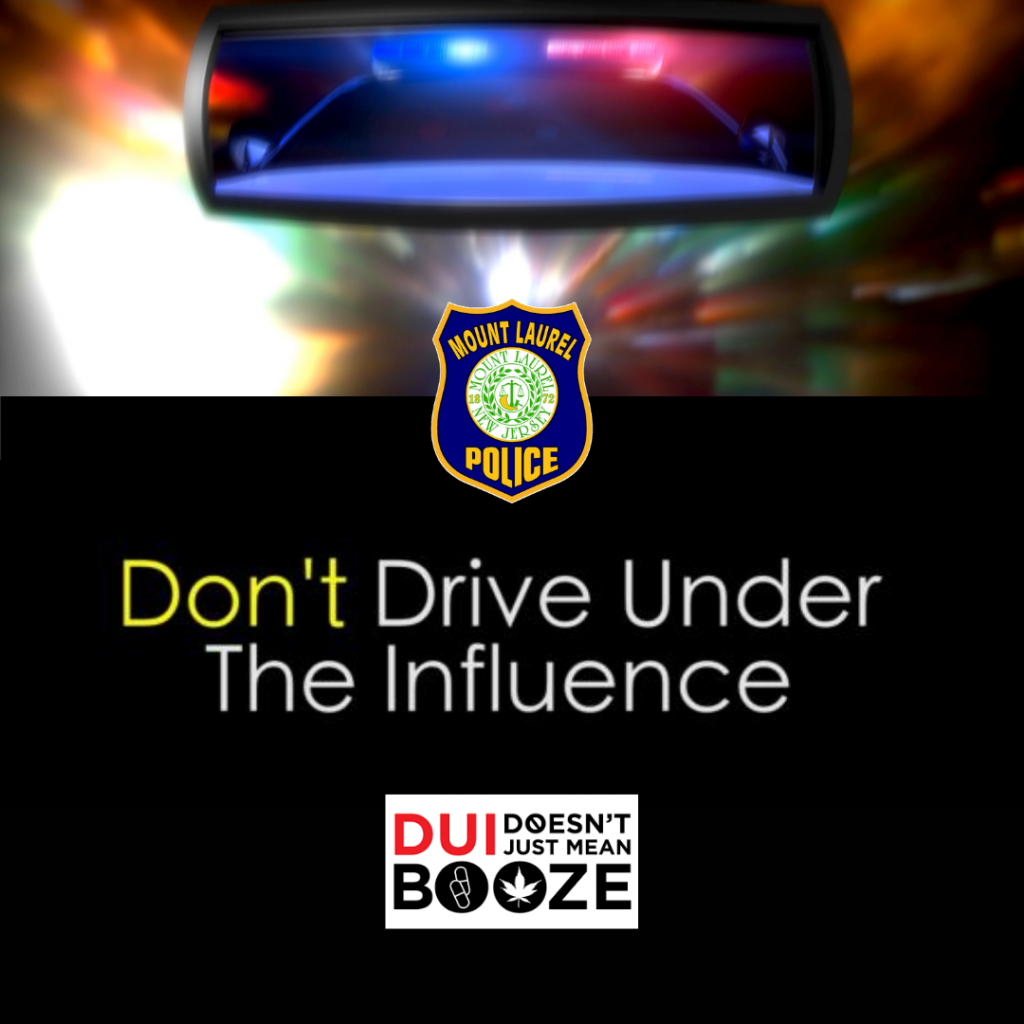 The holidays might be the most wonderful time of the year for many, but it’s also the season for police departments throughout New Jersey to crack down on impaired driving.

The Drive Sober or Get Pulled Over campaign kicked off Dec. 4, and the Mt. Laurel Police Department has been out in full force to keep the roads safe.

“There’s a lot of drinking holidays,” said patrolman Kyle Gardner, public information officer for the Mt. Laurel police. “People are depressed; people are drinking and using drugs, and, unfortunately, still getting behind the wheel.”

Drive Sober or Get Pulled Over aims to prevent impaired driving — either because of alcohol or drugs — with increased law enforcement officer visibility.

According to the state’s Department of Law and Public Safety, the goal is to prevent tragedies during a month that is among the deadliest on the road.

The annual safety campaign has been going on for much longer than the three years that Gardner’s been with the department. He said it’s made possible by a federal grant that New Jersey parcels out among certain towns to support an initiative that focuses not only on drunk driving, but also driving under any kind of influence.

“Over the years, the focus has been on drunk driving: Really, it’s impaired driving,” Gardner explained. “The important thing is that we want everyone to make the smart decision. It doesn’t matter if it’s alcohol or drugs, it’s still driving under the influence.”

Less than a week into the crackdown, Gardner said police have already made three arrests associated with impaired driving, and he’s sure they’ll see more through the remainder of the year. But with more options than ever to get home safely, Gardner added that there’s no reason to put anyone’s life in danger.

“We don’t want you driving if you’re impaired at all,” he emphasized. “There are so many alternate means to get home. Between taxis and all the ride-share apps, designated drivers, having cell phones, motels and hotels being in such close proximity to liquor establishments, there really isn’t any reason to get behind the wheel of a vehicle and put yourself and others at risk.”

Gardner said the Mt. Laurel department “is always out there 24/7, but now there’s just extra officers on the road” he added, protecting the community with more officers out and about during the crackdown.

Drivers under the influence are on the road at all hours of the day, according to the department.

“We’re always, 365 days a year, 24 hours a day, out there patrolling and looking for people who are driving impaired. It doesn’t matter if it’s morning or night — there’s a common misconception that drunk drivers are only out at night,” Gardner explained.

Even though it’s the holiday season and 2020 has been a surreal, unusual year for almost everyone, the job of officers has stayed the same, end-of-the-year safety campaign or not.

“Our job really doesn’t change at all,” noted Gardner. “Some things might make our jobs harder and different, and we’re trying to protect ourselves and others from COVID. But as a whole, we’re out there every day to provide a service to our community, and that doesn’t change no matter what happens.”

And part of that job, according to Gardner, is encouraging everyone living and driving in Mt. Laurel to make the right choices.

“It’s been a crazy year for everyone, but we just want everyone to stay safe and make the smart decision,” he added. “If they’re even questioning whether they’re impaired or not, just stay put and get a ride.”