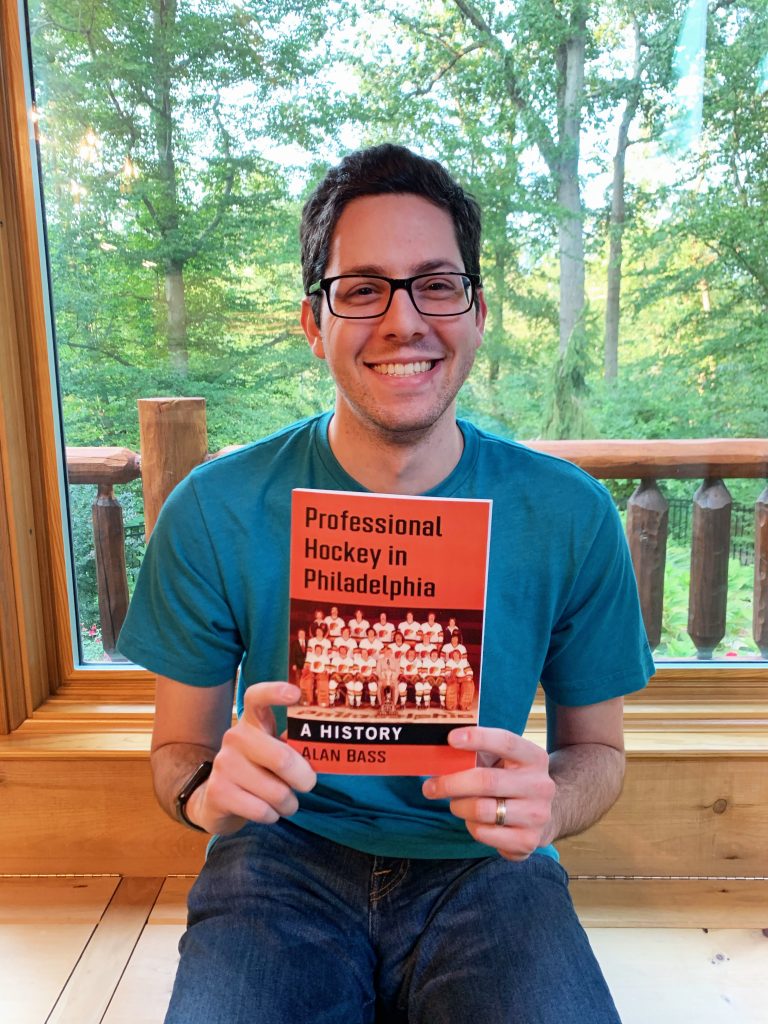 For a young man born and raised in Cherry Hill who later lived in Voorhees, learning the game of hockey and growing up a fan of the Flyers seemed a virtual certainty. But from a very young age, author Alan Bass learned the vagaries of Philadelphia sports fandom.

“My dad took me to a game early in the CoreStates (now Wells Fargo) Center’s existence, against the Pittsburgh Penguins and I fell in love with it,” Bass explained. “I was 6 years old. At the end of the night, Dad was hinting we should leave because it was pretty close to bedtime, but I begged him to stay.

“This was the ‘Legion of Doom’ era,” Bass added. “I remember them being swept in the finals by the Red Wings and didn’t realize they wouldn’t be in the finals every year. It was a heck of a way to be initiated.”

Bass grew up in a quiet neighborhood on the east side of Cherry Hill, off Springdale Road. After college, he made Voorhees Township his home before a recent relocation. That put the author in close proximity to the Orange and Black extended family. For decades, many players and their families lived in the area, and the Flyers themselves have practiced at either the Coliseum or Virtua Center Flyers SkateZone since the early 1980s.

“It was 28 years or so in the region. When I was younger, we used to have skating birthday parties at the Coliseum and then again when the Skate Zone was built, we went there for the same stuff as well. In fact, the house my wife and I lived in was pretty close to Skate Zone,” Bass revealed.

It might come as no surprise what Bass’ next foray into authorship is about. Having already penned a volume on the 1967 expansion that brought a permanent NHL team to Philly, his latest offering is “Professional Hockey in Philadelphia: A History,” an in-depth look at all the teams that skated a turn in the city, from hockey’s infancy in the 1890s through the Phantoms’  departure from the now-demolished Spectrum in 2009.

Bass devotes one chapter on each club, diving into the history of the game  and featuring profiles on colorful characters Philadelphia fans may or may not have known. The Flyers chapter focuses on the relatively-unknown story of Ed Snider’s feud with Jerry Wolman in the 1960s, and how Snider saved the franchise from relocation twice before it even played a game.

“There have been some great things done on the Flyers, particularly by Jay Greenberg, who’s the go-to for team history, but they have been written about ad nauseam,” Bass admitted.

“So I wondered how hockey began in the city, because it just doesn’t appear overnight. I used to mess around in college and do some research, where l learned more about the history of the sport,” he added.

“My love is hockey history, what got us here, what set the stage for what we see today.”

Bass saw an opportunity to address a gap in the way Philly fans understand and know the game, particularly through minor leagues, where the players and their lives have a more interesting and fun edge. He noted there has been more written about the city’s rich boxing pedigree than about hockey.

While the book itself took one year to complete, Bass said all the research that went into it was compiled in pieces over many years.

“I’ve always had real jobs, and I still do have a full-time job in a different area now,” he added. “Writing hasn’t been my primary means of support,  but this has stuck with me for my whole life and allowed me some great opportunities.

“I at least had a good head start with researching the material.”

Bass said his new work is currently available at both Amazon and Barnes and Noble’s online stores, and hard copies should be released some time in October. For more information on the author and his previous work, visit: https://www.alanbasswriting.com/.