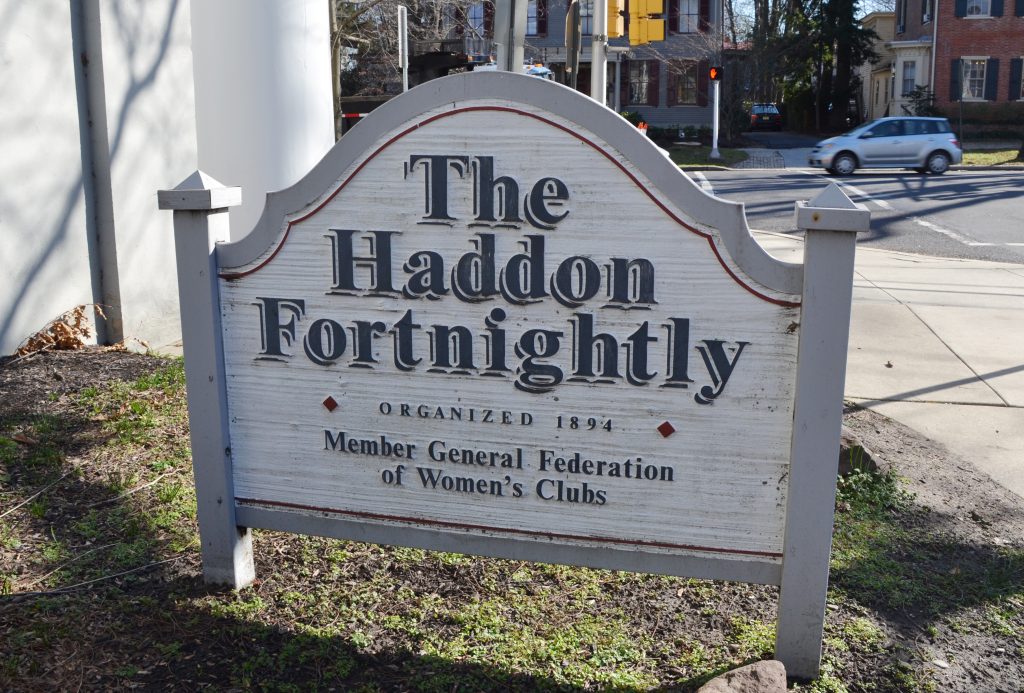 Late last summer, The Haddon Fortnightly began its 125th anniversary by placing a banner announcement outside its headquarters on Kings Highway East, and then commemorated the occasion by holding an elegant bash inside its clubhouse in late September.

The remainder of its quasquicentennial year hasn’t been so rosy. Shuttered along with many other businesses in town and across the region since the onset of the COVID-19 pandemic in mid-March, virtually all of what  brought the organization its deserved reputation has dried up.

Denise Trasatti Sellers and Janet Hutchinson, newly installed club co-presidents, told the Sun shortly after Tropical Storm Isaias blew through the borough on Aug. 4, that THF has only had two in-person meetings in the last five months. Hutchinson added that the club skirted disaster when a tree located near its property was toppled due to the storm, but did not fall on the building itself.

“Our ‘year’ really begins in June,” Sellers noted. “The sad thing is, we had the 125th anniversary and we were excited about getting the club on the road after the celebration. We had strategic planning events, a full meeting of all our members and we had to postpone it.

“We also had six events planned, all rentals, for the last three months, and they were cancelled and we returned all the money to the renters because we didn’t feel right about withholding,” she added. “We also had end-of-year dinners that were planned. It’s been a sad year.”

Hutchinson related that the club was aiming for a day specifically devoted to the 100th anniversary of the ratification of the 19th amendment, which gave women the right to vote.

“We wanted to have speakers from Alice Paul, the League of Women Voters, and someone to talk about the Equal Rights Amendment,” she noted. “We would like to have done it before November, to align with the anniversary of women’s suffrage, and come before the election.”

Hutchinson admitted there were discussions about holding some kind of commemoration of the anniversary on Aug. 26, but she is unsure if it would come together in time, or if the event would have to wait until next spring.

Sellers went on to lament that the pandemic has affected the organization’s finances, in regards to activities and the condition of its home base.

“We’re suffering right now,” she said. “Our building was built in the 1800s, and we’re not just talking about getting new air conditioning or new floors. We did what we could to maintain the property. We had a handy man to come in and clean up and do painting, trimwork, and outdoor landscaping. And then it all had to stop.”

“We can’t do any fundraising events in the building, because Gov. (Phil) Murphy keeps raising and lowering the number of people allowed in indoor spaces,” Sellers added. “Now it’s back to a maximum of 25 people, and that doesn’t work.”

Added Hutchinson, “We’d like to find a grant writer to cover all the costs that are incurred. We absolutely have to work on finding a grant; it’s a high priority. It’s thousands and thousands of dollars a year just on maintenance alone, and we have no income at this point.”

To regain some semblance of normalcy, the organization plans to hold a chrysanthemum sale to brighten the community’s in-home exile. Deadline for purchase is Sept. 15 and pickup is slated for Sept. 24 and 25 at the clubhouse, 301 Kings HIghway East. For questions related to the flowers, contact Pat Underwood at (856) 429-9123 or Joanne Morris at (856) 858-8240.

“We’re also going to try and get a small group together, to have a little book club thing. Just a few people who are interested, have it outside, socially distant, and we just have to find a night where it’s not raining or 100 degrees.”

Both Sellers and Hutchinson stressed the importance of THF’s role in the health and well-being of the people who breathe life into the club.

“We know how important it is, for an organization with 150 women, many of whom are older, to remain in touch during this time,” Sellers stated.

“We feel it’s our responsibility to maintain that contact for business and social reasons, too. Please reach out to members to make sure they’re OK.”