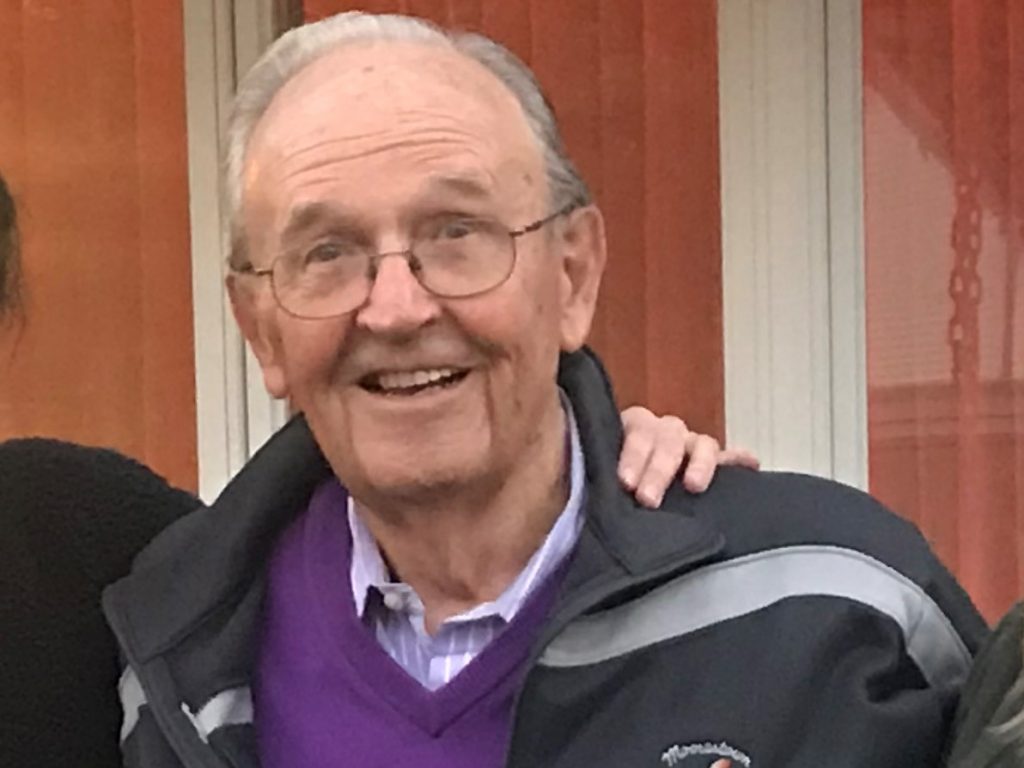 We extend an invitation to celebrate 90 years of love and devotion to a man who dedicated his life to what he loved; family, teaching, coaching — a life in service to others. A life that returned tremendous respect, admiration, and love from all he touched.

Dick was born in Morgantown, W.Va on February 21, 1930, the son of John Albert and Osa Viola Loring, the youngest of six. He was the husband of the late Velma Mae Loring, beloved wife of 39 years; Mary Flynn, loving companion for the past 25 years; father of Cindy May (Randy); Cathy Manning (David); Richard Loring Jr. (Mary). He was the grandfather to Erin, Kyle, Amy, Leslie, David and Sarah. He was the great grandfather to Jacob, Logan and Emelia. Of his many accomplishments and successes, his family brought him the most joy.

Dick grew up in the coal-mining town of Cassville, W. Va where he attended University High School and led the UHS Hilltoppers to two undefeated football seasons in 1946 and ’47 as their QB and represented UHS as a WV state all-star. Dick was then recipient of a scholarship to play QB for West Virginia University, where he proudly represented the Mountaineers from 1949 to 1951. Most recently, Dick had the experience of being honored as one of the “WVU 25 Greatest Living QB’s” during the 2011 ceremony held in Morgantown. He joined WVU QB greats such as Jeff Hostetler, Marc Bulger, Pat White, Major Harris and Oliver Luck. An honor that he and his family cherished.

In 195, Dick and Velma moved to Moorestown where he began his long-time teaching and coaching career at Moorestown High School and a storied football coaching partnership with his great friend and colleague George Masters Sr. Together, they established a Quaker legacy of developing generations of great teams, players and men. The outpouring of appreciation from Quaker Football alumni has been an incredible part of Dick’s life for the past 63 years.

Just four months ago, three of his former players invited him to lunch and as word spread it turned into a dinner in his honor with more than 70 of his former players. They shared great stories and presented him with a plaque commemorating their appreciation. Dick and his family were very touched by this recent tribute. He has often been the guest of many local sporting association organizations such as a recent invitation to join a former player at the Brooks Irvine Football Club Banquet.

A very proud moment that Dick and his family will always treasure- the 2013 NFL Hall of Fame Ceremony in Canton, Ohio inducting former Green Bay Packer and Quaker Football great, Dave Robinson. Dave invited Dick to be his guest and during his induction speech expressed his appreciation for the impact that Quaker Football had on his life.

Golf was also a lifelong passion of his as Dick coached the Moorestown High School Golf team for most of his career winning several state championships and forging many lifelong relationships. Dick loved his time on the links with best friends, former players and family throughout his life. He played the game at a high level and loved the competition and camaraderie of the sport. It is hard to say whether he cherished the turf of the golf course over the turf of the gridiron, but coaching and playing the game of golf brought Dick and those who had the honor of tee’g it up with him great enjoyment. His funny stories, “Loring-isms” and knowledge of the game, made every round a memorable experience.

In the classroom, Dick’s love of history was a gift to his students. He had a unique ability to bring history to life with stories that eclipsed the textbook and made the learning experience fun and entertaining. He knew more about the Civil War than could ever be referenced in a textbook. As was stated by a former student, “he drew deeply from his own experiences, wove irresistible tales, specialized in jarring details, knew more about the Civil War than the original combatants.”

A visitation will be held at the Sunday, Feb. 9 from 2 to 4 p.m. at First United Methodist Church of Moorestown located at 466 Camden Avenue. A service to celebrate his life will take place on Monday Feb. 10 at 10 a.m.

Dick will be flown home to West Virginia for continued celebration of his life at the Smith Funeral Home located at 108 Holland Ave. in Westover, W.Va with a visitation on Wednesday, Feb. 12 from 10 to 11 a.m. service immediately following. Internment will be at Beverly Hills Memorial Gardens with full military honors.