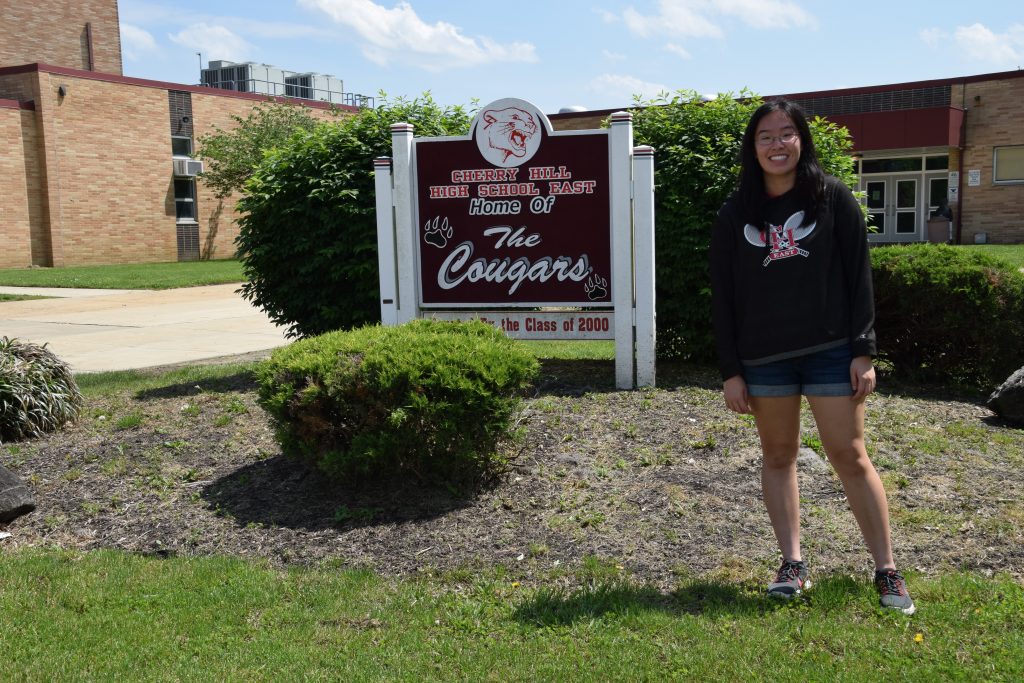 This May, Cherry Hill High School East senior Sophia Liang learned she was a 2019 U.S. Presidential Scholar, a distinction shared by only a handful of other seniors in the country. For Liang, who became a United States citizen only one year ago, the honor has an added significance given that her parents moved to the U.S., in part, to offer their daughter a better education.

Liang is one of 161 students who qualified based on demonstrated academic success through essays, school evaluations, transcripts and evidence of community leadership and service. One woman and one man from each state, the District of Columbia, Puerto Rico and United States families living abroad were chosen for the honor, which was announced by United States Secretary of Education Betsy DeVos. The scholars will be honored in a ceremony in Washington, D.C., from June 23 to June 25.

Liang was born in China, and her family moved to Salt Lake City, Utah, when she was around 3 years old. She said her parents moved partly for a job and partly because they felt that China’s education system focused too heavily on test scores. They wanted to offer her a more well-rounded educational experience.

Her family subsequently moved to Philadelphia but ultimately settled in Cherry Hill. Liang said the teachers at Cherry Hill High School East have had a tremendous impact on her. She said they’ve not only taught her, but along the way, they’ve taken time to get to know her as a person.

“Their support has been really important in helping me accomplish my goals,” Liang said.

Liang earned a perfect score on her SATs, which qualified her for the presidential distinction. Given how competitive the scholar program is, she said she considering not even bothering to fill out the essays and applications, thinking the chances were slim she’d be chosen. She said she couldn’t believe it when she learned she’d been selected.

From the time she walked through the doors of Cherry Hill High School East, she’s seen tremendous personal and academic growth.

“I think I’ve found good niches and community at East, whereas freshman year I wasn’t really sure where I belonged,” Liang said.

“I’d say I’ve grown a lot in confidence,” Liang said. “I’ve taken a lot more leadership positions and tried to make an impact on the school and community more than I thought was possible freshman year.”

Having moved around a fair bit during her childhood, Liang said she didn’t feel a strong attachment to the town until she stepped into the community editor role of Eastside. She said it was through covering the town that she discovered that Cherry Hill is a community filled with “passionate, eccentric” people.

Come August, Liang will leave Cherry Hill to attend Harvard University. She’s not sure what she’ll major in, but she said she hopes to fuse her passion for medicine and biology with her love for journalism and writing.

As part of the U.S. Presidential Scholar program, each student can name his or her most influential teacher. Liang chose her journalism instructor, Gregory Gagliardi.

Gagliardi said one of the things that sets Liang apart from other straight-A students is that she’s not content to settle for just an A. She holds herself to a high standard striving for the highest marks possible.

“She expects a lot of herself,” Gagliardi said.

Gagliardi said Liang has brought that same work ethic to Eastside and held staff to those same expectations. He said Liang is willing to tackle hard-hitting subjects and complex projects that staff may have shied away from in the past.

He said between her academic accomplishments and leadership in varsity sports, he wasn’t surprised she was selected.

“She definitely fits the criteria for someone who should represent New Jersey,” Gagliardi said. “She’s the person to represent the state.”