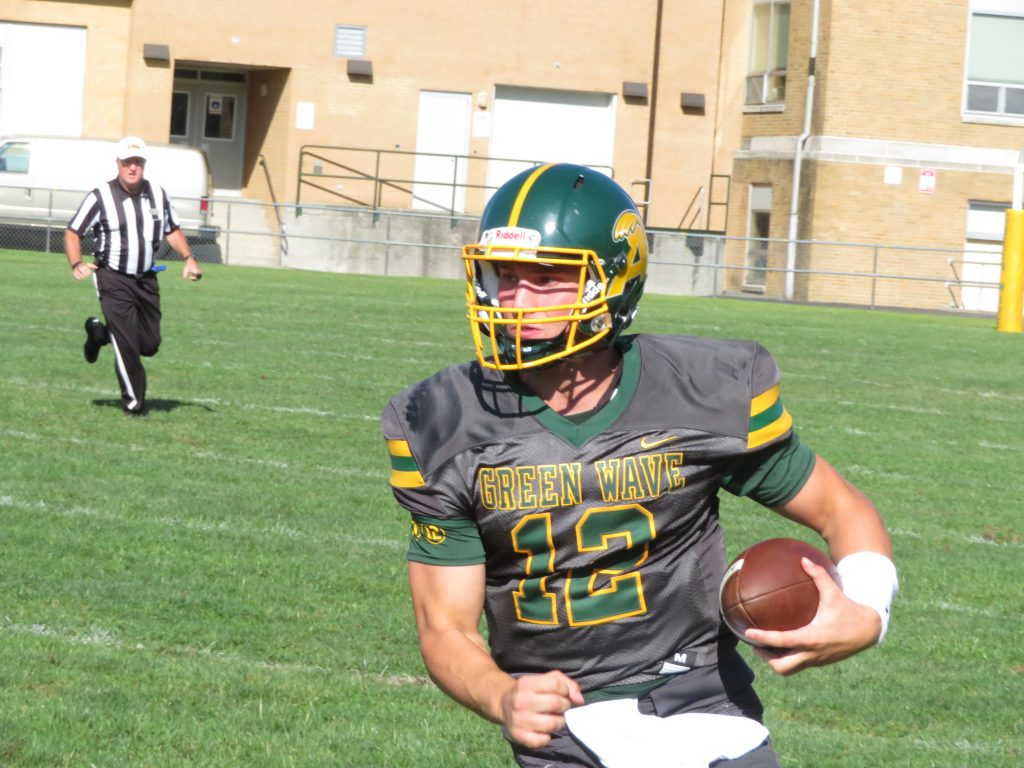 Audubon senior quarterback Scott Lynch has shown the ability to adapt, while being able to dominate in multiple sports.

In this era of athletes specializing in one sport, Lynch is a throwback, a three-sport standout.

Yet make no mistake. He hopes to cast his lot in college on football and it’s easy to see why.

At 6-foot-3 and 215-pounds, Lynch has the size to play the position, not to mention the arm strength. And as impressive as his passing has been, during last season, Audubon began using him more in the running game with favorable results.

Lynch hasn’t taken the normal journey in his football career.

He began as a freshman starting defensive end for Audubon. That season there was a senior quarterback Ethan Martin as the starter. Lynch applied his trade as a linebacker and did quite well. 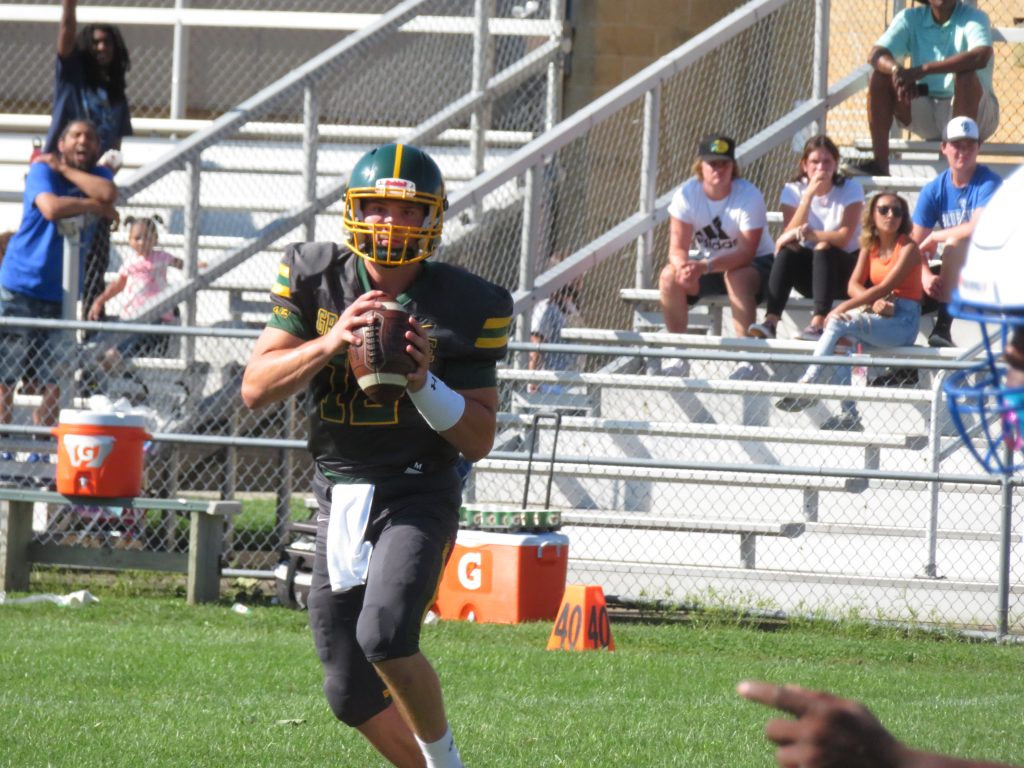 Then as a sophomore he moved to Florida, and attended Northside Christian in St Petersburg. Playing for six-time former Tampa Bay Buccaneers fullback Mike Alstott, Lynch threw for 2,576 yards and 31 touchdowns.

At the end of the school year he transferred back to Audubon.

Playing for an ex-NFL great was a truly unique experience for Lynch.

“I can’t thank him (Alstott) enough for giving me the opportunity and he really helped me in all aspects,” Lynch said. “He taught me everything he knows, which is a lot and I learned so much when I was down there.”

He loved his experience in Florida, with one exception. 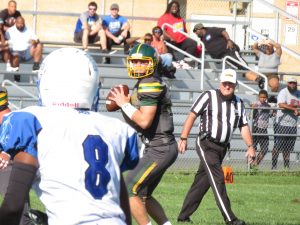 “It was insanely hot and I didn’t get used to that,” he said “But overall, it was a great experience and I loved it.”

Yet despite his sophomore statistics, there was originally a battle for the starting quarterback job as he entered his junior season at Audubon. That’s because in 2020, Audubon’s Sean Driscoll converted from receiver to quarterback and threw a South Jersey leading 17 touchdown passes for a 7-1 Green Wave team in the shortened season due to COVID.

So entering training camp, Lynch and Driscoll were in a battle to start at quarter.

Then Driscoll, who is a recent graduate, was hurt for a few weeks in preseason and Lynch was able to earn the job. (As a postscript, Driscoll would play receiver, but really excelled at defensive end.

“It was neck and neck and Sean got hurt in training camps and missed two weeks, but I don’t think people besides me knew how close it was,” said Dan Reed, who is entering his second season as Audubon’s head coach.

As a junior he completed nearly 58 percent of his passes for 2,002 yards and 25 touchdowns.

Lynch also became a running threat once Audubon saw how effective he was carrying the ball.

“He has a really good head for football, understands the game and defenses and partway through the season we found out he could run the ball,” Reed said. “I thought he was more of a pocket passer but he had 160 yards rushing (and two touchdowns) against Gateway and we started putting more run stuff for him.”

Reed, who was offensive coordinator before taking over as head coach last season, marvels at Lynch’s athletic ability. “He’s a freak and excels at everything he does,” Reed said.

Besides football, he was 26-3 wrestling at 215-pounds. Lynch was a District 28 champion and Region 7 runner-up.

He says that he definitely wants to play football in college, but plans to continue wrestling and baseball his senior year,

“One more year, I have to play these sports,” he said.

Lynch adds that wrestling and baseball help him with football.

“Wrestling helped my conditioning and toughness a lot for football,” Lynch said. “And baseball, with all the throwing, it keeps my arm in shape all year round.”

Playing three sports also helps him as a competitor.

As for football, Lynch said at the beginning of the summer that he had been in contact with many Eastern schools such as Rutgers, Temple, and Delaware. By the time Audubon’s training camp begins he will have been to several camps.

Even before July he had been to camps at Rutgers, Temple, Monmouth, Central Florida, Yale and Wagner and at the time still had scheduled to attend Delaware, Holy Cross and Maine. In early August, Lynch announced a scholarship offer from Maine.

Needless to say, he devotes his full summer athletically to football.

Audubon is coming off an 8-2 record, earning a playoff berth and winning one postseason game. The Green Wave should again have another highly competitive team and figures to contend in a deep Group 1 field.

He had high expectations when he returned to Audubon as a junior and the same goes for this season.

“Last year went really well, and it was what I was expecting, coming back to a winning team,” he said. “This year we are hoping to get a championship.” 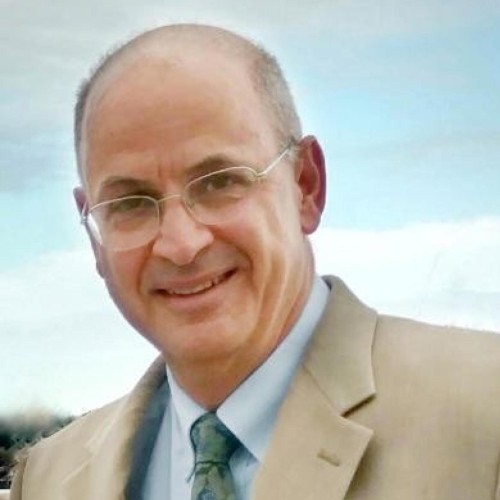