Singleton noted that Haddonfield teams have become accustomed to winning the district championship title since they typically play well early on, but this year, the 12U team lost the first district game. In a double elimination-style tournament, a team can only lose twice before elimination.

“We didn’t play well (the first district game),” Singleton explained. “We didn’t hit well at all, and as coaches, we kind of came together and were like, ‘Man, what do we have here? We’re just not a very good hitting team right now.

“We had confidence that we could play better, but when you come out in the first game and score one run and don’t score any hits … there’s some pressure for the 12-year-olds,” he added. “If you want to become the district champ, you can’t lose again.”

Despite their rocky start, the Haddonfield team, with training, went on to win the next four games in the district tournament, meaning the boys would play at sectionals. In the New Jersey Section 4 contest, they won the first two games and lost the third to Stafford, 14 to 3, with both teams having one loss. In the next game, the Haddonfield team again played Stafford in a winner-take-all match and won 5 to 2, enabling them to represent South Jersey in the state championships.

During the final game against Stafford, Haddonfield pitcher Will Subramanian broke a bone in his ankle while pitching the last inning, keeping him from playing in the state championships.

“(Subramanian) was our guy whenever we were in a jam,” Singleton said. “We brought him in and he always came through for us, so that was really deflating to lose him and not have him for the state tournament.”

Subramanian at first didn’t realize he had broken anything and “kind of just walked off thinking it was nothing, even though he was still in pain and finished the game,” DiMedio said. “He threw to another two batters and the game ended and we won.”

“Having Haddonfield send a 12 year-old team (to the state championships) two years in a row as well, that’s the unique piece of it,” DiMedio noted. “(That’s) a first in Haddonfield history on both accounts.” 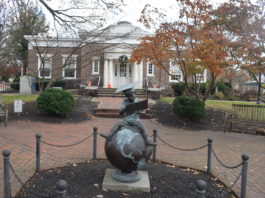