Festival dates are May 12 and May 13 with a submission deadline of March 15. 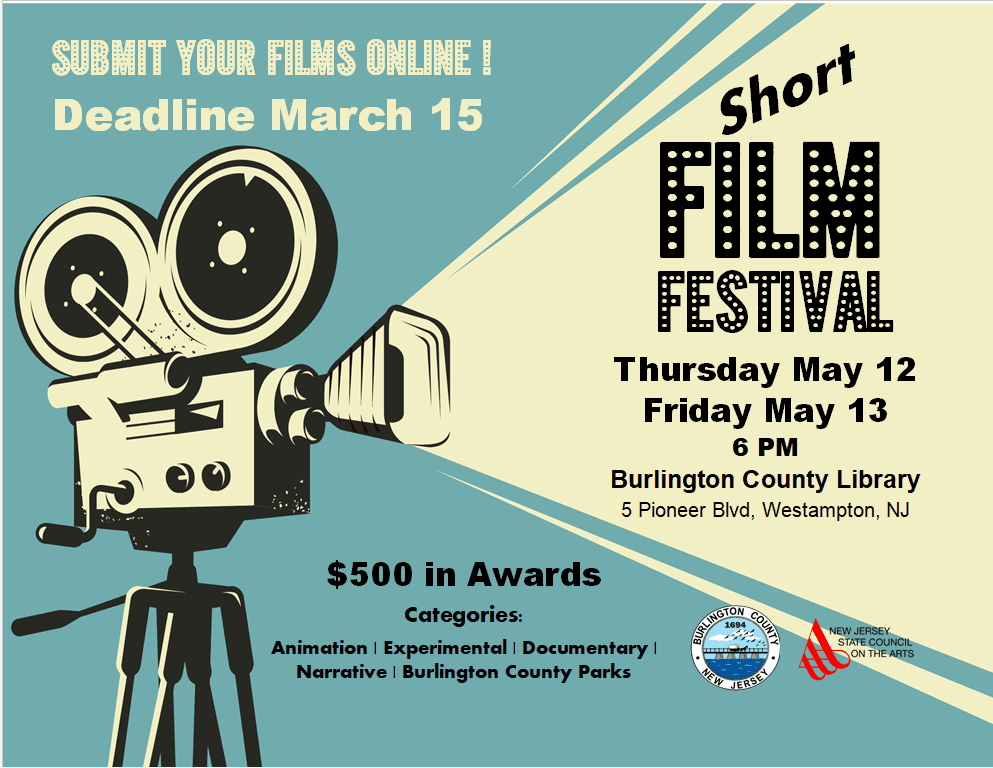 The Burlington County Commissioners are excited to announce a new event this May that will shine the spotlight on local filmmakers and their visual creations.

Submissions are now being accepted for Burlington County’s First Annual Juried Short Film Festival, which will be held on both May 12 and May 13 at 6 p.m. each evening in the Burlington County Library Auditorium, 5 Pioneer Boulevard, Westampton.

Along with $500 in awards, the two-day festival will create an opportunity for visual storytellers to have their work critiqued by a panel of filmmakers and educators. It’s a fantastic opportunity to learn from other filmmakers, sharpen skills and be recognized for their work.

The submission deadline is March 15. There is no entry fee and filmmakers can submit as many short films as they like.

“Burlington County is renowned for its extraordinary beauty, history and arts. We have many amazing locations that are the perfect setting for all kinds of films, including spectacular parks like Smithville, Amico Island and Willingboro Lakes,” said Burlington County Commissioner Director Dan O’Connell. “We’re excited to hold our county’s first short film festival to help further cultivate the arts and film here. Whether you’re an established or first-time filmmaker or just a lover of films and the arts, this festival is going to be a must-see event, so mark your calendars now.”

The two-day festival will feature works from broad categories like fiction (narrative film), non-fiction (documentary), avant-garde (experimental) and animation. There will also be a special “Parks” category reserved for films about Burlington County Parks or shot in and around the parks or with a nature theme.

Film submissions must be under 30-minutes long and family friendly. Any films containing offensive language or adult themes will be directed to re-edit or their film will not be accepted. Submissions may also not include political messaging and the panel will make the determination if overtly political films should not be accepted.

Complete festival rules and submission guidelines are available on the Burlington County Division of Parks webpage, along with a submission form. All films must be uploaded to YouTube.

Judging is expected to be completed by the middle of April and an announcement of the winners is anticipated in early May. The winners will be screened at the festival, which is being funded with a grant from the New Jersey Council on the Arts.

“This is a fantastic opportunity for filmmakers of all levels to share and receive recognition about their work,” O’Connell said. “Residents will be welcome to come to the festival screenings, meet the filmmakers and have discussions about their creations. It promises to be a great event that celebrates filmmaking in Burlington County.”