The former Millville High School football player is “making the best of it," especially after finding his fit at RCSJ. 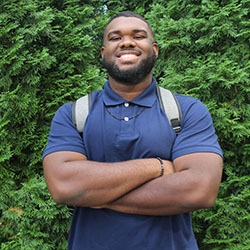 Rowan College of South Jersey (RCSJ) students have consistently displayed an innate propensity to overcome the most arduous obstacles thrown in their paths. Tyrell Dunn, a freshman communications major, has dealt with unimaginable personal tragedies yet continues to keep his eyes on the prize.

libera“Within a single year both my parents passed away,” Dunn said.

In 2015, Dunn and his older brother, sadly, witnessed the death of their mother who suffered a fatal heart attack right in front of their eyes. Their father succumbed to an array of health issues in 2016.

Interestingly, the mental anguish Dunn suffered through after his mother’s untimely passing seemed to slightly dissipate after the death of his father.

“When my mom passed, I think it hurt more,” he said. This is a sentiment the freshman does not want people to misconstrue.

“It sounds like I’m showing favoritism to my mom over my dad; however, when my dad passed, I felt like I’ve been through this before,” Dunn noted. “It sucks, honestly. But now I’m making the best of it.”

The former Millville High School football player is “making the best of it,” especially after finding his fit at RCSJ.

“I’m going to be honest; I didn’t know what I wanted to do at first,” Dunn admitted. He took a leap of faith, decided to see where Liberal Arts Communications classes would take him, and was pleased with the choice he made. “My first communications class was Mass Media. We had an assignment where we had to look at occupations (you can enter with a Communications degree) and I saw a TV sports broadcaster. I was like, yeah, if I stick through it, and I can be a TV sportscaster, I would love that.”

Although Dunn has reached a point of acceptance regarding the death of his parents, the writer, understandably, went through moments where he would sometimes think life was not worth living. While going through multiple stages of depression, there was a time when he seriously contemplated suicide.

There was one reason that kept him from committing the fateful deed — his brother.

“Even during those dark moments, I knew I couldn’t pull it off because then I would leave him hanging,” Dunn explained about the bond he shares with his sibling who is currently serving in the army. “That’s my closest kin to me. I couldn’t do that to him. I have to stay alive so we can both have better futures.”

Despite having gone through numerous forms of adversity, Dunn has found a way to leave a positive impact on others, including in the classroom.

“Tyrell is a student who stands out in class,” said Dr. Renee J. Post, associate professor of Communications. “He has a friendly disposition, a great sense of humor and a genuine kindness and curiosity about him. He’s a focused, hard-working, and responsible student.”

“I really like Dr. Post’s classes,” added Dunn. “I enjoyed her Speech and Electronic Media classes.”

The associate professor also made it a point to give the part-time grocery store worker additional assistance with class assignments while he was going through some tough times. “I love how understanding she is,” said Dunn. “She has my highest respect.”

The future journalist wrote several engaging new stories — including one about his friend, Chase Petty, who was recently drafted in the first round by Major League Baseball’s Minnesota Twins organization and another about Kanye West’s latest musical release, “Donda.” Dunn also wrote a story – for RCSJ’s newspaper – about how he lost nearly 100 pounds.

The trauma that Dunn has endured at such a young age is unfathomable; however, his internal strength and willingness to fight the good fight is noticeable to many.

“I think his story can be an inspiration to others. It is inspirational to me,” Post, who has been with the college for 11 years, said. “Tyrell’s positive attitude towards life, after the hardships he faced, is admirable. The fortitude and courage Tyrell portrays as an RCSJ student can help other students pursue their dreams no matter their circumstances. It’s important that his life’s journey is told.”

When asked how he has been able to keep his eyes on the prize while overcoming the ordeals he has encountered, Dunn pondered silently for several moments then said: “Because I know that’s what my parents would want. I know deep down they wouldn’t want me to stop achieving what I want to achieve. I know that if they were here, they’d be pushing me even further.”