Volunteers and members of the Berlin Historic Preservation Commission met at the historic James T. Dill House on Oct. 30 to celebrate completion of  renovations there and acknowledge reaching a donation goal of $180,000 set three years ago. 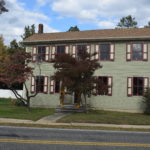 Since 2018, the Berlin Historic Preservation Commission has worked with Historic Architect Margaret Westfield and others to restore the James T. Dill House on Jackson Street. The house is complete with new window shutters, based off an original that was found, partial roof and floor replacement, and new electric, heating and plumbing systems. (EMILY LIU/The Sun) 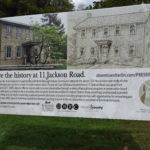 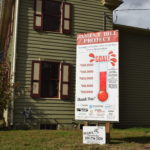 The Historic Preservation Commission celebrates reaching its goal of $180,000 in funding for the renovation. Seen here is the thermometer before they painted it. (EMILY LIU/The Sun) 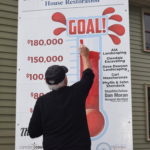 Joe Hoffmann, husband of Historic Preservation Commission Chair Christina Hoffmann, paints the thermostat to signify reaching its donation goal on Oct. 30 at the James T. Dill House. Hoffmann worked closely with the renovations throughout the past three years with other volunteers. (EMILY LIU/The Sun) 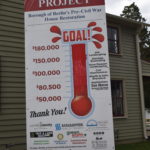 On Oct. 30, volunteers and members of the Historic Preservation Commission gather at the James T. Dill House to celebrate the completion of renovations and reaching their fundraising goal of $180,000. (EMILY LIU/The Sun) 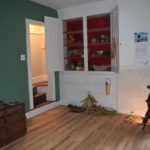 Near the heater, a drawing of a boat called “Evangelene” was discovered under three layers of wallpaper. The date and the artist are unknown. (EMILY LIU/The Sun) 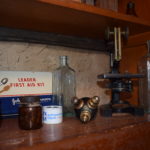 The room toward the entrance of the James T. Dill House was once used as a doctor’s office. A note reads that it was common for doctors to practice from home in the 19th and 20th centuries. Cabinets contain historic medical equipment. (EMILY LIU/The Sun) 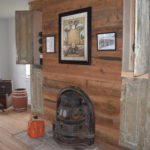 While much of the flooring at the newly renovated James T. Dill House was original, the sub-floor from one room needed to be replaced and panels from that floor were used to rebuild the former brick fireplace, pictured here. (EMILY LIU/The Sun) 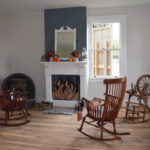 The downstairs living room of the James T. Dill House is decorated with three rocking chairs and a hand-drawn fireplace. (EMILY LIU/The Sun) 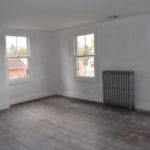 Upstairs, the master bedroom of the James T. Dill House has been repainted. (EMILY LIU/The Sun) 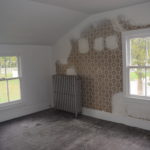 Beneath the paint, wallpaper of what the room looked like before can be seen at the James T. Dill House. (EMILY LIU/The Sun) 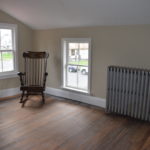 Upstairs the children’s room has been decorated with a rocking chair and a crib. (EMILY LIU/The Sun) 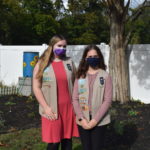 Girl Scouts Kaitlynn Kirk (left) and Joanna Davis from Troop 30689 created a garden at the James T. Dill House for their Silver Award project. It consists of perennial flowers, some grasses, two benches and a rain barrel that can be used to water the site. (EMILY LIU/The Sun)

The house, built in 1855, was saved from demolition in March 2017 when Berlin resident and chair of the borough’s Historic Preservation Commission Christina Hoffmann stopped the bulldozer.

“We have a historic district and that property is in the historic district, and any work on the exterior needs to come before the preservation commission for a certificate of appropriateness,” Hoffmann explained.

“ … After a few months of discussion, the builder was given the option of restoring and selling the building on his own or donating it to the borough, which he decided to do,” she added. “In exchange, rather than building three buildings (as he planned), he built two and donated the property with the Dill House residing on it to the borough for $1 in 2018.”

Since then, Dill House has undergone various renovations under the counsel of Margaret Westfield, a Haddon Heights based historic architect who has worked with the township since 1988 on preservation of the Berlin Hotel.

Westfield noted that historic preservation is not always about bringing a building back to the way it once looked, but about preserving the record of it, including any changes and additions made throughout history.

In the last four years, volunteers have replaced parts of the house’s roof; dug up and added metal beams to the foundation; and added heating, ventilation and air conditioning, in addition to a new electric system. The original window panes have been restored, hardwood floors have been restored and the building has new paint inside and out.

Westfield recalled how volunteers had found an original window shutter in the basement and worked to design matching shutters consistent with the style and size of the window openings. In one room, sub-floor panels that were dug up and replaced were reused as a fireplace enclosure to hide the HVAC equipment and ducting.

“That wasn’t there historically, at least not like that, but it’s a modern element that’s reminiscent of what would have been there,” Westfield said. “It reused some historic fabric that had been salvaged from the building in such a way that it adds to the overall appreciation of the architecture.”

Rooms and artifacts downstairs include a doctor’s office that held a cabinet stocked with historic medical supplies, a reminder that former occupants practiced medicine out of the home; a bathroom; a kitchen with a heater; and a drawing of a boat titled “Evangelene” that was discovered under three layers of wallpaper. Another room is decorated with wooden rocking chairs and a painted fireplace.

Upstairs there are the master bedroom, two other bedrooms and another bathroom.

Outside, the Dill House also has a new garden created by Girl Scouts Joanna Davis and Kaitlynn Kirk, complete with two benches and a rain barrel to help with watering of the flower and grass assortment.

“We tried to get plants that would come back every year so that it’s sustainable,” Kirk said. “A lot of them don’t require much watering, so that it’s easier for [Hoffmann] and everyone who’s taking care of the house.”

As the garden was being put together, Davis and Kirk held workshops for younger Girl Scouts where they were taught the importance and ways of conserving water.

In the future, Hoffmann hopes the house can be used by local schools and colleges to host classes in art, history and preservation in a historic setting. 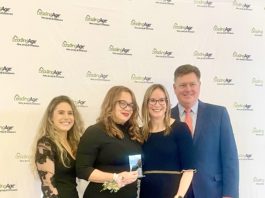