Christensen, professor in the School of Earth & Environment, led the study that was published in the “Geophysical Research Letters" journal. 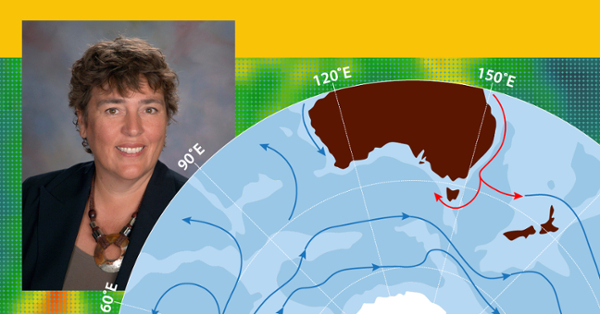 Christensen, founding chair of the Department of Environmental Science and a professor in the School of Earth & Environment, was lead author of a study that was published Sept. 7 in the journal “Geophysical Research Letters,” a publication of the American Geophysical Union.

The research examined an intermediate level ocean current, which runs about 500 to 1,000 meters below the surface, known as the Tasman Leakage, or TL, that flows around southern Australia and links the Pacific and Indian oceans, eventually reaching the South Atlantic.

While scientists have long studied international ocean flow patterns, the TL was discovered fewer than 20 years ago. Christensen said her team’s analysis of ancient, deep water sediments proved that the TL has carried water around the world for at least seven million years.

“The oceans circulate over the full range, from shallow to deep,” Christensen said. “The TL went undetected until just recently, and we are still learning the role it plays in global ocean circulation and climate. Our study opens the door to a deeper understanding.”

The research is significant, Christensen said, in part because it deepens scientific understanding into the developing planet.

“There were a whole series of changes that occurred around seven million years ago,” she said. “The TL started when some of those changes were happening, including global cooling. It was a period in which the world got cooler and drier.”

Christensen said it is unclear from the research if the TL formed in relation to climatic and other geologic changes, only that it developed concurrent with them.

A broader understanding of climate

Christensen said scientists cannot and do not study the current climate crisis in a vacuum, meaning it must be considered in comparison with other warming and cooling trends throughout history.

“Today we’re looking at a system that’s changing very quickly,” she said. “We build our climate models around different boundary conditions, different states of the Earth, and the climate models of today are tested against past conditions.”

By studying the past, scientists can better understand the present, and better predict its impact on the future, she said.

“There are no two points in time when the Earth was identical but what we can do is find a climate state in the past and describe the conditions for the model,” she said. “That allows us to make stronger models.”

As for the present, she said, scientific knowledge of how the global ocean network functions is still quite limited but analysis of ancient core samples such as those taken for the TL study provides a long view.

“We’re alive for a very short range of variation of the ocean,” she said. “Longer range studies provide better perspective.”

What will be the GCL’s effect on the environment?

Should Mantua focus on the present or future?