Moorestown’s Zoning Board of Adjustment had a moment of silence for the victims of 9/11 at its Sept. 21 virtual meeting.

It was the first virtual session for the board; in person meetings have been suspended because of rising COVID cases.

Chairman Joseph Maguire announced the change at the board’s meeting in late August.

The board’s first action at the meeting was to pay respect to the first responders and health-care workers who offered their help 20 years ago on 9/11.

“Let’s think about the people we lost that day, the people impacted that day, and also the service members that we had that defended us after that day who we’ve lost, and who also have defended us and were injured or still going through struggles from those times,” Maguire noted.

Moorestown residents Sarah Clarke and Michael Boone attended the meeting for an application regarding improvements to their home, which is in the R-1 district. Both have been through the process before; they need a front-yard setback in order to make those changes.

Clarke and Boone received approvals from the board in2014 for the same changes, but  they never got around to the renovation.

“It sounds like you received your approvals in 2014, and then life got in the way, as it does, and you’re in a position now that you would like to move forward with this addition,” said Melanie Levan, board solicitor.

“I think that the design is really lovely,” said board member Lynne Schill. “I think that it’s going to make the house more beautiful for the neighborhood and because we approved it before, I think we should approve it now.”

Moorestown resident Courtney Cioll came before the board to get a variance application for her home, which is in the R-2 Zone.

“We were putting up a pool, and where the filter would, if it had to be 15 feet, it would kind of be right in the middle of the side yard, and we have three kids running throughout the whole yard, and there’s an opening to the fence,” said Cioll.

“So I feel like they could fall over it, so we wanted to see if we could keep it closer to 3 feet so it wouldn’t be right in the middle of the yard,” she added.

Cioll’s testimony was part of the record; the application will be continued to the month of October.

“When you come in here and you think you’re getting one thing, and it seems like it’s starting to go sideways with questions that you weren’t expecting, continuing for a month gives you some time to gather your facts, pictures, and more evidence,” said Maguire. 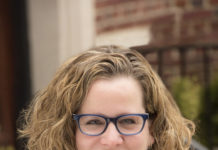