Ceremony an annual tribute to local victims of the terrorist attacks 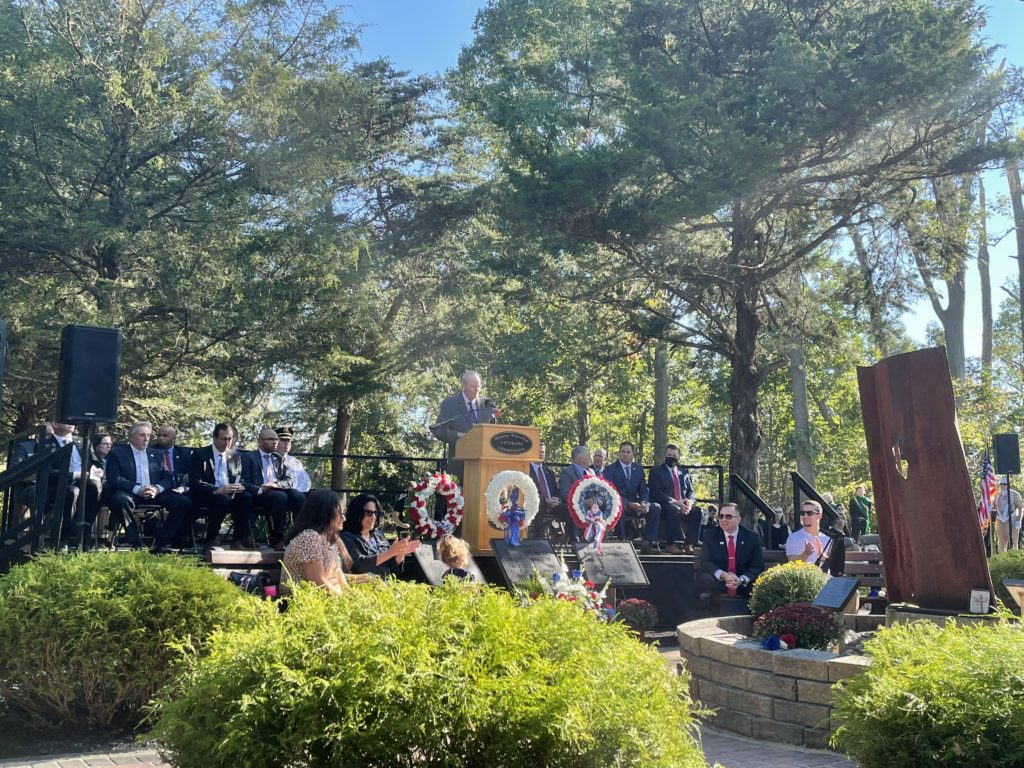 The annual Gloucester County Patriot Day ceremony on Sept. 11 marked the 20th anniversary of 9/11, and as it does every year, focused in part on local residents who were killed that day.

The 8:30 a.m. ceremony at the 9/11 memorial inside Chestnut Branch Park in Mantua honored all victims of the attacks, with an emphasis on county residents John Rodak, Nicholas W. Brandemarti and Perry Thompson.

“We share how courageous and strong our country can be in the face of tragedy,” Commissioner Director Robert M. Damminger said. “During the 20th anniversary of the tragic events that unfolded on American soil at the hands of terrorists, not only do we pay our respects to those we lost, including the lives from Gloucester County, but we proudly honor the men and women who ran to the scene, answering the call for help in the face of the unknown.”

The 9/11 Place of Reflection inside the park includes a twisted I-beam from the World Trade Center in the center of the memorial area. Damminger also pointed out flagpoles donated by the Rodak and Brandemarti families. A five-point area around them pays tribute to the often  forgotten victims at the Pentagon that day.

Rodak’s wife Joyce was asked to speak and reflect on the 20-year anniversary of the day her husband was killed.

“I honestly didn’t know how I was ever going to find my way forward,” she said. “It was extremely painful having to explain to our two young children that their daddy would not be coming home that night or ever again.”

Mantua Mayor Pete Scirrotto, after making a statement on behalf of the Brandemarti family, also commented on the miracle of the Place of Reflection not being damaged even after the storm that struck earlier in the month.

“In this area right here, you can look to the left, right, front of us and back. That tornado came through here, but it didn’t touch this spot,” Scirrotto said. “So now, I got to feel that John and Nick’s presence were here, maybe just shadowing this and making sure that nothing happened to this sacred place that we all come to.”

A bell ringing tribute coincided with the times each hijacked airliner hit its target and included the Rodak family, as well as first responders. A wreath-laying at the front of the memorial took place toward the end of the event.