Spirits were high on Sunday, Aug. 22, as around 100 kids, parents and other community members came together at New Brooklyn Park for the Building Up the Youth event led by Sicklerville residents Ernest Brown and Nikki Thompson.

Kids had time to play games like Connect Four and Uno and engage with each other, and the event culminated with a barbecue and a motivational walk, where participants held balloons and walked from the park along Erial Road and back. 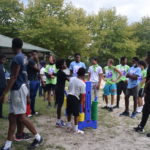 EMILY LIU/The Sun: Youngsters gather around an intense game of Connect Four provided by Building Up the Youth, and cheer on both sides at New Brooklyn Park in Sicklerville on Sunday, Aug. 22. 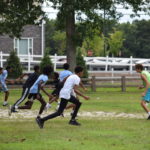 EMILY LIU/The Sun: Kids race each other on the fields of New Brooklyn Park in Sicklerville on Sunday, Aug. 22 before the Building Up the Youth walk and barbecue. 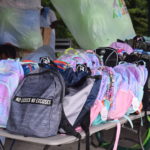 EMILY LIU/The Sun: Building Up the Youth donates 200 backpacks with book supplies on Sunday, Aug. 22 to youth in Sicklerville at New Brooklyn Park. 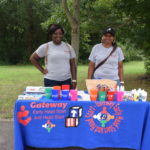 Building Up the Youth also had 200 backpacks and school supplies to give away to kids. Gateway Early Learning Center and Sicklerville Early Head Start Center also had a table set up to promote their child-care and education program for infants and toddlers and to encourage job applicants.

Brown began the organization in 2018 and it has grown in numerous ways. In September 2020, Building Up the Youth officially obtained nonprofit status, resulting in more financial stability. Brown was also given a van by Chick-Fil-A in Burlington, who believed in his cause.

“The reason these kids believed in me is because I’m not somebody who read a book and tells them,” Brown said. “When I was young and lived in Philadelphia, I was deeply into the streets and did a lot of jail time.

Brown continues to hold a basketball camp every Saturday from 9 a.m. to noon at the park, where he works with personal trainer, Hakim Chandler, to help kids get into shape in addition to teaching them how to play the sport.

“In 2018, when I just started, I was doing the same things, having people come to the basketball part, and we had a workout back then,” Brown noted. “Now, when I have camp on Saturday, it can be anywhere from 20 to 90 kids that might show up on any given week.”

Brown also helps mentor kids and holds community events, the most recent being How to Tie a Tie in July. His dream is to open a community center in Sicklerville.

Though many of the kids at the Building Up the Youth event knew each other and were familiar with the organization, the walk and barbecue attracted several first-timers as well.

“This is my first experience with Building Up the Youth and what I see, I’m super impressed,” said Larry Blake, a board of education member in Winslow Township. “I like the book bags. I see the games, the food, I see a lot of young people having fun. It just seems like everyone is enjoying themselves. I’m really impressed.”

To learn more about Building Up the Youth, visit https://www.buildinguptheyouth.org/ or https://www.facebook.com/Building-Up-The-Youth-899250850241221.