Burlington County Prosecutor’s Scott Coffina announced that a 49-year-old Pemberton woman has been indicted for creating a GoFundMe campaign to raise money for her husband’s cremation and funeral, then leaving his body in the morgue and using the donations for living expenses.

A grand jury indicted Patricia Clark on one count of Theft by Failure to Make Disposition (Third Degree). The indictment was returned Aug. 13 and signed by Prosecutor Coffina. An arraignment will be held soon in Superior Court.

The investigation revealed that Clark created the fundraiser after her disabled husband passed away in April 2019.

“Please, if there is anybody out there that can make a donation to help with the expenses I would greatly appreciate it,” she expressed on the GoFundMe campaign’s web page. “His children would also appreciate it.”

The investigation revealed that during the two-month period, 28 people contributed to the cause, raising $2,050 of the $3,000 goal.

The investigation was conducted by the New Jersey State Police. The case was presented to the grand jury by BCPO Assistant Prosecutor Eric Cornog.

An indictment is an accusation. Defendants are presumed innocent unless or until proven guilty. 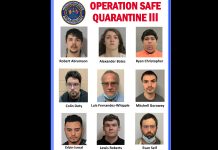