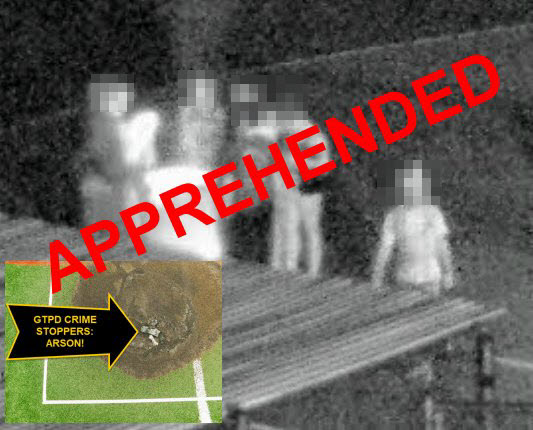 A “Gloucester Township Police Crime Stoppers” social media post was released to the public with the video of the crime and it resulted in numerous tips referencing potential suspects.  The department also received several tips on the Gloucester Township Police Anonymous Tip Line.  The anonymous tips helped detectives direct their investigation efforts to potential suspects who were juveniles in the local area.  Numerous juveniles were interviewed in the presence of their parents/guardians and most were cooperative with the investigation.
(8) eight juveniles were charged for several different offenses as a result of the investigation.  The charges are as follows:
(1) one white juvenile male: charged with (1) one count of Arson (3rd Degree) and (1) one count of Criminal Trespass (Petty Disorderly Person Offense)
(4) four white juvenile males: charged with (1) count each of Criminal Trespass (Petty Disorderly Person Offense)
(3) three white juvenile females: charged with (1) count each of Criminal Trespass (Petty Disorderly Person Offense)
The Gloucester Township Police would like to thank the public for their assistance in this investigation that included the sharing of the social media posts related to the arson and the tips that were received that ultimately culminated with the arrests in this investigation.  The turf field is currently in the process of being remediated so that it can be enjoyed again by all participants.
If anyone has additional information in reference to this investigation, please call, the Gloucester Township Police Department at 856-228-4500 or call the GTPD Anonymous Crime Tip Line: 856-842-5560. To send an Anonymous Tip Via text message to Gloucester Township Police, text the keyword TIP GLOTWPPD and your tip message to 888777. You may also click here to access our Anonymous Web Tip page https://local.nixle.com/tip/alert/5170177