Nothing could keep the Cherry Bowl from its appointed rounds, from its 1960 inauguration with five participating clubs through 2019, with 13 teams in attendance. But like most things, COVID caused a hard stop for the annual community swimming event.

Yet, from the cheering throngs who packed Haddontowne Swim Club over six hours on July 31 — the club last hosted the event in 2009 — you wouldn’t have known anything had changed.

In the end, Erlton Swim Club claimed its sixth title in the last seven events, edging out Old Orchard, 1068 to 1041 points. Willowdale ended up in third with 785 points.

Results aside, the payoff was something bigger.

“We knew they were going to be the team to beat. No surprise there,” said Cherry Bowl Chairman Robert Bartel of Erlton’s club. “The biggest thing is, we wanted the kids to walk out of here regardless of how they finished, with a smile on their face and a feeling they contributed to their team win or lose.”

Volunteers from across Cherry Hill put together the event under duress. Kim Caputo  from Downs Farm described how the swim clubs were only given five months’ notice of the competition, a process that usually takes a year or more. Under normal circumstances, Bartel revealed, a future host would shadow the club host from the year before to gain knowledge and understanding of what works and doesn’t work well. The ongoing pandemic made that impossible.

“We’re grateful for the sponsors, everyone in the community that rallied behind us to help us pull it off, and of course all the volunteers, 150 of them,” said Caputo. “That helped us. They’re all working individuals who love their children and love the sport.”

The swimmers, flush with youth, showed their resilience and enthusiasm as they  prepared for the contest. Some were able to use what little time they had last summer when clubs opened before school, and then kept in shape in competitions during the school year. Others, like those who were once part of Kingston Estates Swim Club, made individual arrangements to keep fresh.

“It was a great loss to lose Kingston, because they were a powerhouse when my kids were swimming here,” Bartel explained. “So when they went out, a lot of their swimmers went to other clubs, especially Cherry Valley. Kudos to the kids for finding a new home, and the new homes love ‘em.”

At Haddontowne, an ability to reconnect with friends and neighbors was embodied by the “tent city” erected in one corner of the club, a showcase of canopies that represented all 12 clubs and were pitched side by side.

If you noticed one particular corner of town being a little louder and energetic than the others, you have keen eyes and ears for Charleston. There wasn’t an official award for best team spirit, Caputo noted, but it’s unofficial based on how loud and creative a club gets to cheer on their kids. 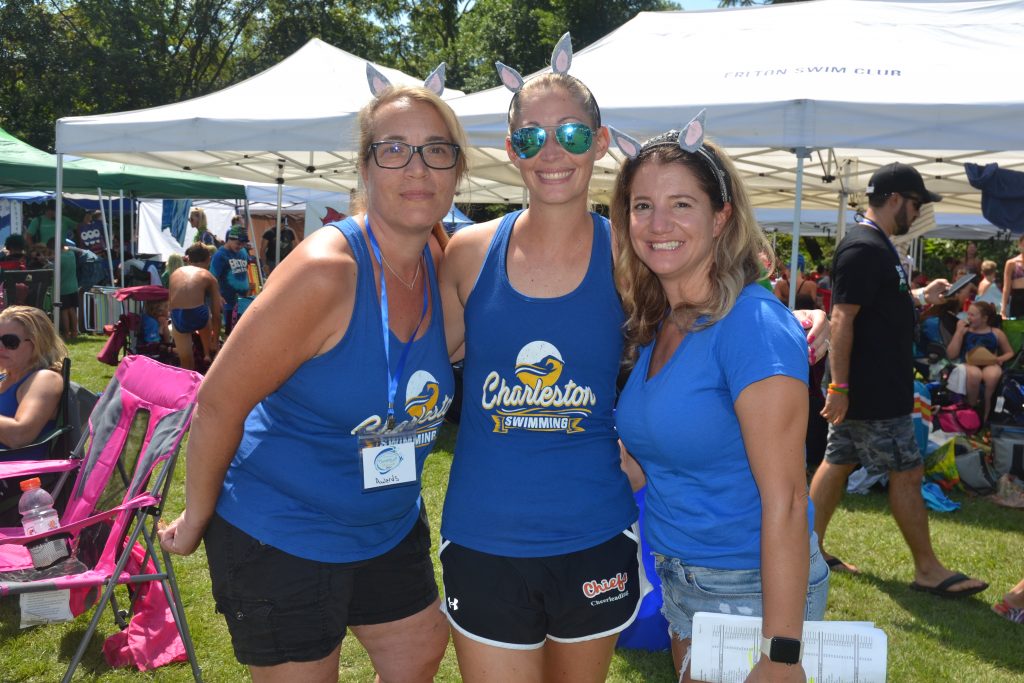 “It was like nothing ever passed. They were happy to be back in the pool and doing what they love,” Caputo said.

Reaching out to current and former township residents who either couldn’t make it or didn’t feel up to milling around with hundreds of spectators on site was a priority for this year’s comeback. As such, Caputo said a livestream was set up for the day and drew 3,300 viewers from across the country.

“It takes a lot of hands, a lot of help and a lot of creativity and ideas from a lot of hardworking people to get this done,” Bartel offered.

Check out the latest edition of South Jersey Sports Weekly for more comprehensive coverage of the event.