In March, the board hired Johnson Controls Fire Protection LP/Simplex to replace the alarms.  The project was already underway when the company discovered there were more fire alarms than previously counted in obscure places, such as the inside of a closet. Because of a New Jersey fire code that states “regardless of the age or condition of smoke alarms currently installed, all affected alarms must be replaced with 10 year sealed battery smoke alarms,” the  alarms found after the original count must be replaced. None of them can be removed, even if the location is questionable.

Because the miscount wasn’t discovered until later, the district is paying Johnson Controls $50,000 more than the original contract price to rectify the situation, pushing the original payment of $95,516 to $132,394. There were no schematics where the fire alarms were in the building and the school had passed the annual fire inspections.

“We’re replacing obsolete equipment all together at GT (Gloucester Township Elementary),”  said Superintendent John Bilodeau. “It’s in disrepair, and [the company] said ‘the code says this,’ so we were somewhat compromised, because how are you going to go against fire code?”

“The project is in process. We need the permit, but we also need it done before the kids come back to school and it’s a lengthy process,” Grassia said to explain why the district will continue with Johnson Controls despite the costs. The company had been chosen through a co-op rather than a formal bid that would have required picking the lowest option.

“If the board knows something they have to get the fire code, we would be negligent if we did not do what this body is doing tonight,” Bilodeau noted. “We did learn a lesson, especially as we approach the next job and make sure that the company, most likely a new one, is going to make sure of exactly what’s needed and we don’t get stung like this again.”

Though none of the board of education members or the public were particularly happy about the situation, the meeting discussion shed light on what went wrong and what could be done differently next time.

The next Gloucester Township Board of Education meeting will be at 7 p.m., Aug. 23, at C.W. Lewis. 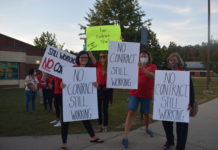 Teacher contract and a resignation discussed at board of ed meeting