Palmyra set to participate in National Night Out next month

Event designed to bring police,community together and enhance their relationship 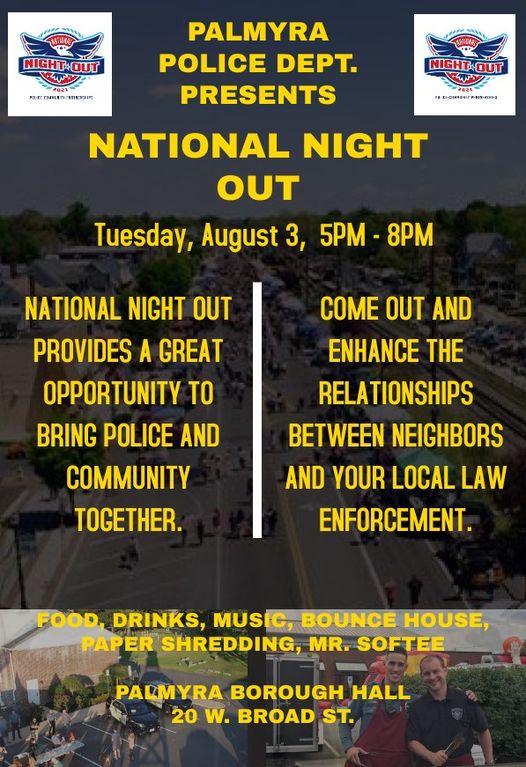 The event was canceled last year due to the coronavirus pandemic. This year’s outing will be on Tuesday, Aug. 3, from 5 to 8 p.m. at Palmyra Borough Hall, 20 W. Broad St.

“We’re excited about the event,” Campbell said. “It’s a good event for the community.”

The evening is designed to bring police and the community together and enhance the existing relationship. Campbell appreciates the year-round support of residents.

“Our community is great with our police,” she said.

All 7,000-plus residents of Palmyra are invited to enjoy food, drinks, music and a bounce house. There also will be a paper shredder for people to safely dispose of documents.

“Fraud and identity are on the rise,” Campbell noted.

Mister Softee will give out free ice cream and the department will grill hot dogs. Restaurants will also offer food samples.

Perhaps the best part of the whole night?

The National Association of Town Watch, founded in 1981 by a suburban Philadelphia man, directly led to the creation of National Night Out, which debuted in 1984. Palmyra is one of an estimated 191 municipalities in New Jersey that will take part this year.

The borough’s police department’s mission statement is all about the community, as it seeks “to provide professional and ethical public safety services in partnership with citizens to identify, prevent and solve the problems of crime, fear of crime, social disorder and neighborhood decay, thereby improving the quality of life in our community.”

Campbell is expecting a successful event if prior National Night Out gatherings are an indicator.

Palmyra recently hired two full-time police officers, along with three special law-enforcement Class I officers who work up to 20 hours a week and handle issues such as court security, parking and traffic control enforcement, park patrol and details for special events.

“We have five total new employees to introduce to the public,” Campbell said.