Spotting – and stomping – a menace 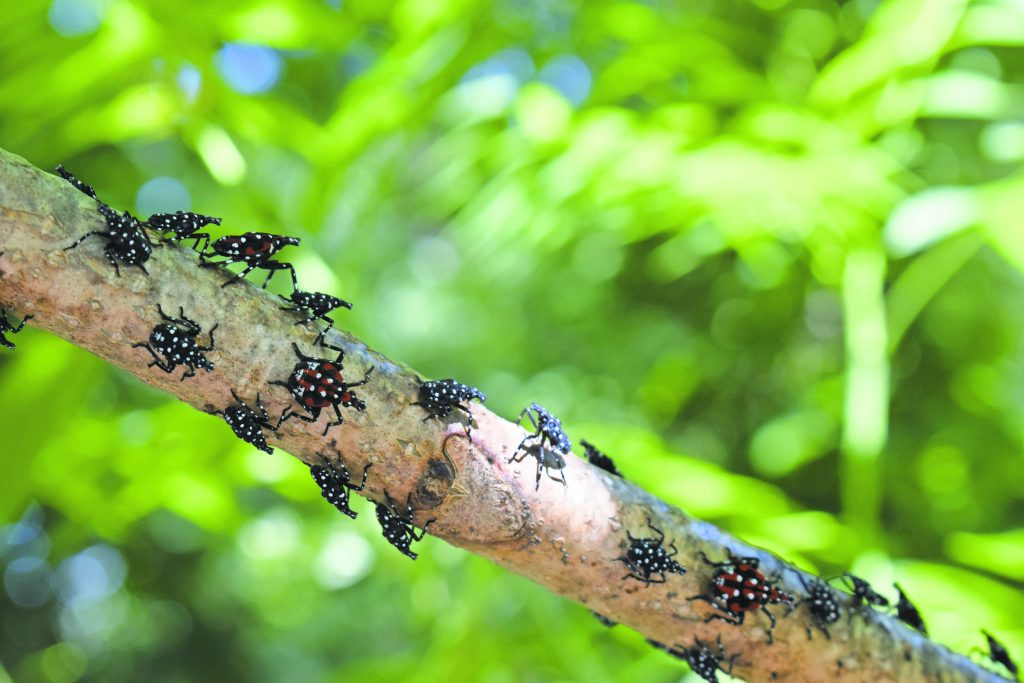 On this particular day, there was also a chance for visitors to get a lesson on the invasive spotted lanternfly, thanks to the Delran Green Team.

“They’re everywhere now, so we want to alert the public,” team member Al Carp said. “It’s amazing how many people don’t know what the spotted lanternfly is.”

As part of its community outreach effort, the Delran Green Team was on hand to educate the public on the destructive insect. Indigenous to China, Taiwan and Vietnam, the spotted lanternfly was first reported in the United States in 2014, when it landed in Pennsylvania. Three years later, the bug made it to New Jersey. A plant hopper, the spotted lanternfly feasts on hardwood trees and agricultural crops and has the potential to cause extreme devastation to the 70 different plants it currently eats.

“And that’s just what’s known,” said Sue Huesken of the Delran Green Team. “What happens is they start out as an invasive species, and as they become more comfortable, they attack everything.”

While some people at the Burlington County event were not familiar with the spotted lanternfly, Green Team member Kara Bottino said people seemed more educated this year over last. Many asked for recommendations on the best way to kill the pest.

On display was a plastic container containing dozens of lanternfly nymphs. The bugs were caught in Carp’s homemade trap, which he had on hand to show the public and modeled after a similar device produced by the New Jersey Department of Agriculture (NJDA).

“There are two traps we use in New Jersey,” NJDA entomologist Paul Kurtz said. “The circle trap can be built on your own. The second is a bug barrier that utilizes a sticky trap around the tree. The new design prevents all non-target catches by making it safer for the environment. Both traps use no pesticides or lures, only the biology of the spotted lanternfly against itself.”

GreenApple Organic Solutions offers a similar tree trap. Prior to this year, the Camden County based company provided organic mosquito and tick control to area properties. Last month, GreenApple got into the spotted lanternfly business, too.

“This year we actually had a lot of people asking, ‘Does your spray work against spotted lanternflies?’” GreenApple owner Kristina Thompson said. “While we do notice the people who get sprayed regularly have less lanternflies on their property, these things are almost impossible to get rid of.

“We came up with the idea of wrapping the trees.”

The organically treated bands are secured around a tree trunk by a GreenApple technician, who returns to remove the band at the end of the season – or sooner if needed. The band features an inward-facing aggressive adhesive that traps lanternflies as they move along the tree trunk.

Since introducing the trap in early June, GreenApple has had a lot of interest from customers. And better still – the traps are working.

“It’s incredible how many lanternflies are being caught climbing up the bark of the tree,” Thompson noted. “If there’s something that is harming our trees, we have to do something. And unfortunately, that’s what the lanternflies are doing. They’re destroying the trees.”

According to Kurtz, education is the best defense in squashing the lanternfly problem.

The NJDA recently updated its pest and Spotted Lanternfly pages with new material for homeowners and businesses at www.badbug.nj.gov. Penn State keeps a national page at www.stopSLF.org.

Some of the tips the NJDA shares include:

In order to protect native species, the NJDA also encourages residents to use a professional when applying pesticides.

“There are many factors such as pollinators, beneficial insects and plant health when applying (pesticides),” Kurtz said.

Efforts targeting the spotted lanternfly are critical to diminishing its growing population. Of course, as wonderful as it would be to see an end to the pest’s invasion, it’s also important to be realistic.

“To be honest, we’re not going to get rid of them,” Master Gardener Kathy Simon admitted. “It’s going to be like the Japanese beetles. We’re going to have to figure out how to control the lanternfly.”

The invasive beetle first arrived in the United States in 1916, via a plant shipment to a nursery in Riverton, and wreaked havoc on native ornamental and agricultural plants. Over time, however, traps and methods have been developed to target the beetle.

That’s where Simon’s optimism comes in. Although she doesn’t see the pest being eradicated, she does think we can learn how to minimize its destruction. And humans aren’t the only ones who can make a dent in the lanternfly population. As an invasive species acclimates to a new home, native animals and insects also get used to its new neighbor.

“Our native birds or other insects will be figuring out if they want to eat spotted lanternflies,” Simon explained.

Simon has been involved with agriculture and gardening for most of her life. The Riverton resident owns Catalpa Gardening, which aims to create bird and pollinator- friendly spaces for customers using primarily native species.

“I’m really interested in the balance of it,” Simon said. “You don’t want people to have an unreasonable expectation that by hanging out in their backyard with their credit cards and taking egg sacs down, they’re not going to see them. We are going to see them. But whatever we can do to slow it down until we can figure out what a nice targeted solution is, that would be great.”

Awareness of lanternflies is key, and throughout South Jersey, it seems to be growing.

“There’s definitely more awareness than there was a year ago,” Simon said. “Most people are aware to some degree. Whether they’re interested or not is always another story.”

Kurtz said those not bothered by the spotted lanternfly should consider its wide reaching impact, not just on agriculture, but even with damaging property.

“It will be a nuisance pest for many homeowners by feeding and excreting sugar water,  causing sooty mold development on homes, cars, outside decks and furniture, etc.,” he  explained. “Sooty mold can leave a permanent dark stain on many surfaces.”

The NJDA encourages all residents to “Join the Battle and Beat the Bug! Stomp it Out.”