Matt Skic’s fascination with the era began in childhood. 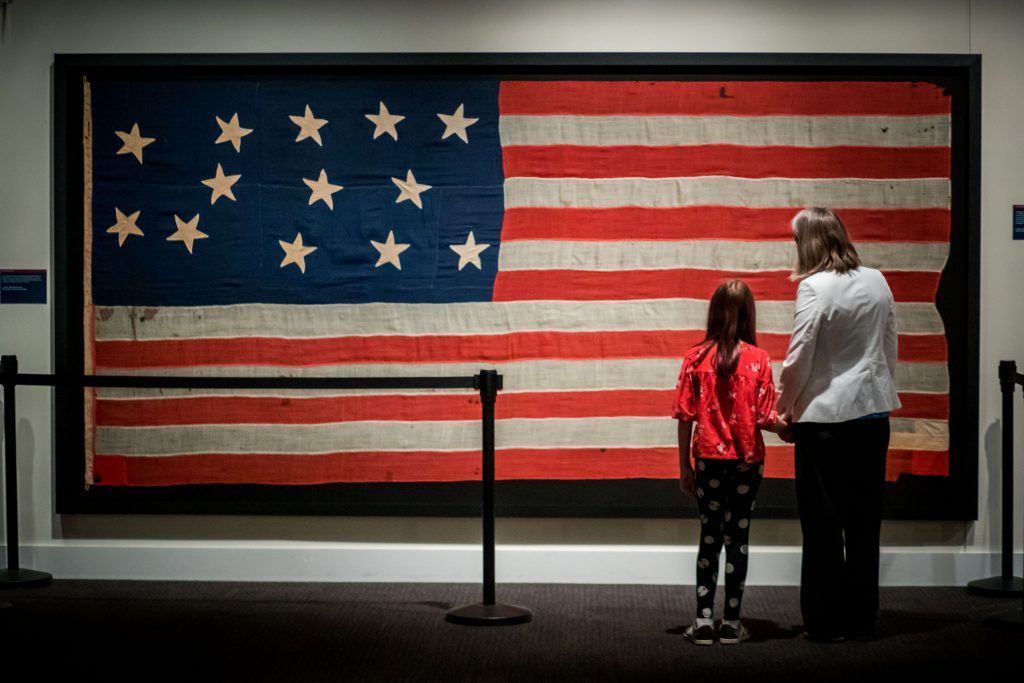 Matt Skic spent half a year leading his team at the Museum of the American Revolution in Philadelphia as they sought out pieces for the “Flags and Founding Documents, 1776- Today” exhibit.

The Moorestown resident serves as the museum’s curator of special exhibits, and his team has brought together a showcase of more than 40 rare American flags and historic documents, including a rare printing of the Constitution. The resulting exhibit will run through Labor Day weekend.

Skic’s fascination with the revolution dates back to his childhood. He grew up in New Jersey’s Hopewell Township, about 10 minutes away from where George Washington crossed the Delaware River, and that close proximity to history piqued his interest in America’s first president. Ever since he could read, Skic has voraciously consumed books on Washington.

Skic also was drawn to the American Revolution because at its core, it’s an underdog story. Skic’s mother was born in Hungary and came to New Jersey as a refugee from the Hungarian revolution. His father’s parents came to the United States as Ukrainian refugees during World War II. Skic said for these eastern Europeans dealing with communism and facism, America was a beacon of freedom and liberty, and the story of its war against the British was inspirational.

Skic attended American University in Washington, D.C., to study history. He interned at the Smithsonian Museum before graduation and moved on to the University of Delaware, where he earned his master’s degree in American material culture.

Skic joined the staff of the Museum of the American Revolution in 2016, before it  opened to the public the following year. As an assistant curator, he helped develop and improve the museum’s collection, so that it now acquires new objects through a combination of donations, purchases and loans from other facilities.

In his current role as curator of special exhibits, Skic is responsible for acquiring new objects for the museum’s collections, whether they be textiles, flags, swords, documents or other objects from the revolutionary period. He also oversees care of the collection,  ensuring each object is stored and preserved at the right temperature and humidity.

Skic said he’s loved every minute of getting to combine his passion with work, and the position is a “dream come true.”

“I loved museums growing up;I love seeing something from the past and being able to connect with it,” he explained. “Objects are evidence of people from the past, decisions they made.”

It was a past exhibit that brought Skic to Moorestown. Last October, The Museum of the American Revolution opened the  When Women Lost the Vote exhibit. For three decades following the American Revolution, all New Jersey residents “possessed of 50 pounds proclamation money” were entitled to vote, leaving the door open for women and free Blacks. More than 100 females cast their ballots in the state, and two of them are buried at Moorestown’s Trinity Episcopal Church.

Skic said when his research brought him to Moorestown, he walked through it and thought the area was beautiful. He and his family moved there in March 2021.

The “Flags and Founding Documents, 1776 – Today” exhibit was supposed to be on display during the summer of 2020, but was postponed a year due to COVID. Its  documents portion showcases state constitutions and the first printing of the U.S.   Constitution, which was done in Philadelphia. Skic said the museum also wanted to incorporate flags in the exhibit, as well to show the evolution and expansion of America.

As a result, the exhibit features 43 documents and 43 flags. Skic said the flags serve as a visual representation of the country’s evolution and are on loan from a private collector. They display important moments in American history, from a black and white abolitionist flag to a 23 star flag from 1861.

“We’re hoping that this is a very thought provoking exhibit,” its curator said.

To learn more about the Museum of the American Revolution, visit  www.amrevmuseum.org.