Wall size depiction of township landmarks was months in the making. 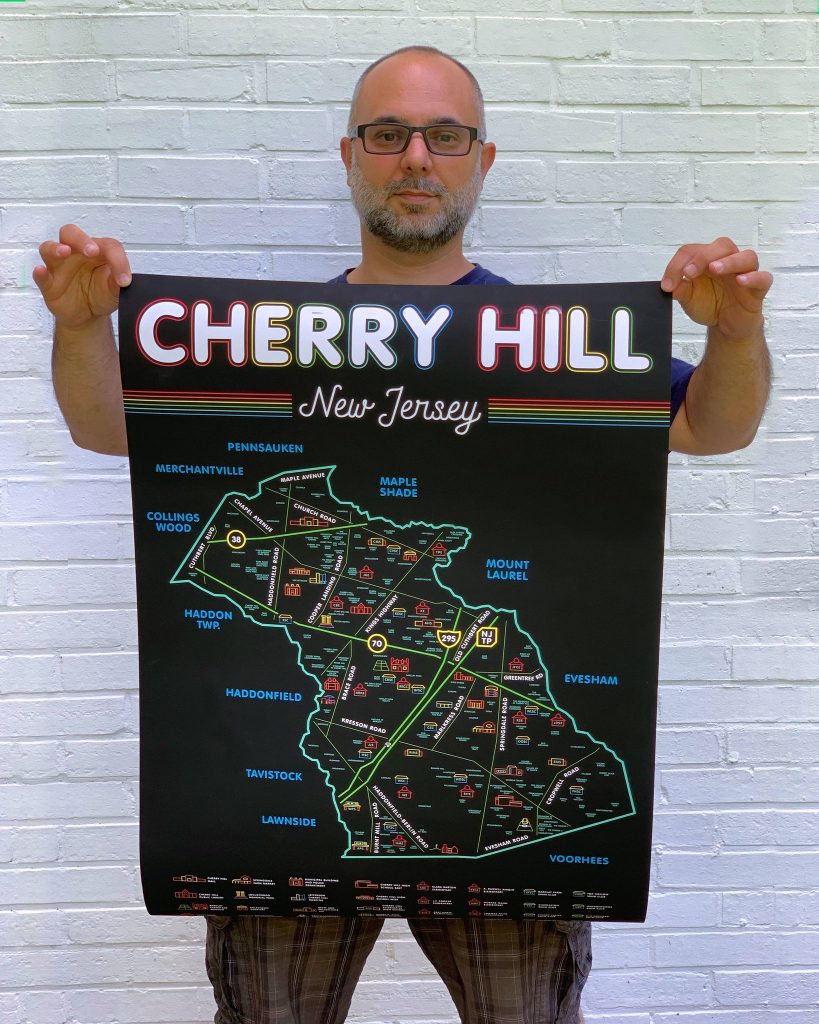 With a keen eye for graphic design, a curiosity for his new hometown, and some generous assistance from residents and township officials, graphic artist and township resident Steve Spatucci can now give the gift of Cherry Hill.

Spatola’s latest work is a detailed, wall-mount-style map that includes just about every single landmark and neighborhood name anyone who lives in the township, past and present, could remember.

What could possibly spur Spatucci to endure such an undertaking? The internet, naturally.

“It was some time earlier this year, probably January,” he recalled during a June 15 conversation with the Sun. “Someone on What’s Up in Cherry Hill posted that they lived in the Hinchman area of Cherry Hill, and I had no idea where or what that was,” he added, referring to a township Facebook page. “And so I got this idea.

“As a designer, I wanted to do a simple layout of our town with major landmarks and icons. Just so folks could get their bearings.”

Just about a month later, Spatucci posted a simple colorful map with just a handful of neighborhood names, the bigger, well-known ones like Locustwood and Kingston Estates. At that juncture, people were more interested in a map listing all the neighborhoods, and were not shy about commenting on all those missing.

Eventually, thanks to his own research, and the intervention of interested locals and township officials, Spatucci was able to unearth roughly 200 names, including many that may have been forgotten in the six decades since Delaware Township became Cherry Hill.

“One person told me about Olde Spring Crossing, which was only a couple streets in the 1960s,” he noted. “Then a new developer came in, expanded the street grid and brought in a different name. That was a challenge.”

Additional intervention came from the Cherry Hill Fire Department, which was kind enough to provide its detailed GIS (Geographic Information System) neighborhood map. Spatucci used it to cross reference with details from other maps, as well as information people posted, including older names of neighborhoods that aren’t on more modern maps.

“What I wound up doing was putting in all the new and old names all at once, to fashion an amalgam of past and present,” he explained.

Speaking of past and present, Spatucci grew up in the area, Mt. Laurel to be exact. He started out in Marlton as an adult, before the question of where to settle and raise a family arose.

“In our quest for a change of scenery, one of the main things was where to send the kids, and the school systems around here are excellent,” he said. “We found a house we liked in town and we stayed here ever since.”

Spatucci has remained for 14 years, and he only half joked the process behind finishing the map took as long. In all seriousness, he revealed the finished product was the result of four  months of non stop work. .

“The time it took for the initial map was a handful of hours, maybe four total,” Spatucci  recounted. “The effort that went into the rest was the result of pure research, proofing and correcting mistakes. I made up a text document and tracked all the references and spelling variations.

“There is so much information which went into this, even down to a small street sign on the border between Cherry Hill and Pennsauken nobody ever mentioned,” he added. “I wanted to be a complete-ist.”

Settling on an appropriate size proved to be the final curveball, necessary due to the sheer amount of information included. Spatucci admitted his original intended dimensions of 24 by 36 inches would press customers to make out all the landmarks and names, so he had to upgrade slightly larger to make it readable.

He believes his creation is the most comprehensive map of Cherry Hill Township that exists.