The weather was rainy and dreary on May 29, but that didn’t stop the Centurions of South Jersey motorcycle club from dropping off donations at the Animal Welfare Association (AWA) in Voorhees.

About 50 club members arrived at AWA, forming an assembly line to move  donations from a trailer to the hallway in just over an hour.

“It was pretty amazing how much we got, because we started a drive about a month and a half ago,” said the club’s Public Relations Officer, Mike Kulikowski. He and his wife are regular AWA donors, and he thought doing so would be a great way for the motorcycle club to become more involved with the community.

“This would be interesting, if we could take our bike trailers and fill them up with donations in our club and filter out into the other chapters,” Kulikowski noted.

Two months later, his vision came to fruition. When the law enforcement based motorcycle club stopped by to drop off donations during the AWA’s May drive, they came with two trailers full of items that included food, paper goods, monetary donations, gift cards, clothes and blankets.

Kulikowski explained what the Centurions are all about.

“A lot of people look at motorcycle clubs with a shifty eye, but we’re not like that,” he said. “We’re law enforcement based, so we’re very driven for charities and things like that and we’re almost entirely made of police officers, fire department, military, public servants, employees like myself.

“It’s a motorcycle club,” he added. “It’s almost the way that it sounds: We all have motorcycles, we love to ride, we have rides every week, but a lot of what we do is charity.”

The Centurions club was started in 1973 by a group of police officers in Camden City. The South Jersey chapter has about 70 members, according to Kulikowski, making it the second-largest chapter after Philadelphia.

Throughout the year, members participate in other local donation drives and events. Next up is  Christmas in July, a run followed by a barbecue and toy drive that takes place on July 25 in Philadelphia. All proceeds benefit the city’s Shriners Hospital for Children.

Those who wish to donate to the AWA can find a full list of items requested on the AWA’s wishlist at https://www.awanj.org/wish-list/. 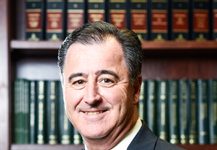