Sarah Anderson, a first grade teacher at Joseph D. Sharp Elementary School, was one of a select handful of instructors recognized as top 10-Phillies All Star Teachers during the team’s May 3 game against the Milwaukee Brewers.

The honor was more than a year in the making as Anderson was selected in 2020, when COVID prevented the awards. Anderson said in some ways, the honor felt even more special after the events of the last year, which was, hands down, the most challenging of her nearly two decades of teaching.

It had been two years since Anderson stepped foot in Citizens Bank Park, so to be honored by the Phillies organization and have one of the first evenings of normalcy in a long time at a game with her husband was especially meaningful.

Anderson, a resident of Marlton, was nominated by former student Lindsay Newcomb, who is now a freshman. Newcomb submitted an essay detailing the impact Anderson had on her. In first grade, Newcomb was nervous to begin full-time schooling with a teacher her siblings hadn’t had. But Anderson created a safe space for Newcomb and her fellow classmates, even after the former  graduated from her class. She remembers returning to visit Anderson even when she was in fifth grade, and how Anderson always had a genuine interest in and curiosity about her students’ welfare.

“I think she takes the time to really get to know her students and really be there for them,” Newcomb said.

Anderson was touched when she read Newcomb’s essay nominating her. She said making a lasting impact on students is all she could ever ask for as a teacher.

“You dream about having an impact on children that survives past that year,” she added.

The honoree has taught at Sharp for 19 years. She studied early-childhood education at the University of Delaware. Upon graduating, she interviewed with Cherry Hill and was eager to join Sharp’s staff, given the school and its community’s outstanding reputation. She’s stayed ever since.

Initially, Anderson taught kindergarten for a year before she was transferred to first grade. After a year of that grade, she went down to the principal at the time and said she’d found her place. She’s taught first graders ever since.

Prior to the last year, when the district implemented full day kindergarten, first grade was a student’s first entry into full day education. Anderson said it’s a pivotal time in student education, because kids come in so young and inexperienced, and when they leave, they’re reading, writing and working independently.

“They’re  just these little sponges with this hunger to learn that’s just so amazing,” Anderson noted. “It’s really my honor to watch them bloom as much as they do.”

She explained there’s a certain sense of wonder first graders have that they lose as they grow older and school becomes more laborious. At the first grade level, students still have an eagerness and craving to learn that Anderson wants them to hold on to as long as they can.

While the past year has been the most challenging of her career, she said it’s just another remarkable testament to how much students have the ability to grow at that young age. While many of her students walked in not knowing how to click on a mouse or how to type, she’s now able to conduct virtual lessons with her entire class — something she’d never had to consider doing in her 18 years before.

The last required Anderson and her colleagues to get creative and to learn how to prioritize. She’s had to look at students with new eyes to see not only where they are mentally but emotionally, and how much they can handle on any given day.

Anderson added that the pandemic has brought her and her colleagues a new kind of awareness in that respect.

“The beauty is that you grow as a teacher,” she explained. You have to. You’re evolving.” 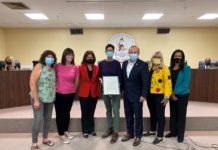