Devin Dromgoole, a volunteer firefighter in Gloucester Township, joked that his mother has awoken many times to an emergency pager at 2 a.m., followed by the sound of two feet hitting the floor.

The pager still rings out the same – but now, it’s four feet hitting the floor.

Both Devin, 25, and his sister Molly, 22, volunteer with Chews Landing Fire Department, one of several volunteer companies in the township. He was already an EMT when he joined the department in 2017, wanting to do more emergency rescue.

Molly was inspired by her brother and joined in the summer of 2019.

“I got into it because of him,” she says. “I saw the skills he was learning, what he was doing, and he always said it was rewarding.”

The siblings have spent pretty much their entire lives in Gloucester Township and are spurred by a desire, as Devin says, “to give back to the community that raised them.”

Oftentimes, brothers and sisters grow up participating in different activities, sports, hobbies, and so on. It was like that for the Dromgooles, too – but the fire department has changed that.

“This is one thing that we’ve been able to do together,” says Devin. “This is that one opportunity in our lives where she and I get to be on the same team.”

There are some challenges that come with serving alongside family members. Devin and Molly have to balance their personal and professional relationships, especially in the fast-paced intense environment of an emergency situation.

“When I end up having to be her supervisor, I have to keep in mind that in this circumstance, I’m her senior firefighter,” says Devin. “I might have to tell my sister to go into a burning building, and having to take that step back and view her as one of the firefighters can be challenging.”

But the benefits of volunteering together far outweigh any struggles. They can sit back and talk through trials on call or training, and about their shared skills and experiences.

“We push each other to succeed and to further our training and our education; we push each other in a way that’s very motivating,” Molly says. “It’s nice to have someone to rely on, someone in your corner.”

And Molly wasn’t the only Dromgoole captivated by Devin’s time at Chews Landing. Their mother Sandra joined shortly after her daughter, and now volunteers with the department as a ladies’ auxiliary member. They have family in other companies, too.

Of course, blood isn’t the only thing that ties firefighters together. The “brotherhood” of the fire service goes well beyond the traditional definition of family; the environment fosters a sense of teamwork and community that forges long-lasting bonds.

“You feel like you have a home there,” Devin says. “Anyone who’s looking for a place where it’s a Tuesday night and you need something to do, just come to the firehouse.”

Looking for more volunteers, four Gloucester Township fire companies – Glendora, Chews Landing, Blenheim, and Erial – kicked off a recruitment campaign in 2019. The companies provide training and equipment to all members, free of cost.

Anyone over 18 years of age can join and train to become a firefighter, and teenagers can volunteer starting at age 16 as junior firefighters.

Molly says her time as a volunteer has taught her a number of skills – and not just technical training specific to firefighting. She has learned important lessons about patience and teamwork, as well.

And through their service, the Dromgooles are able to protect people and property in the community that raised them.

“We see people on the worst days of their lives,” Molly says. “We’re a sense of relief when they see us.”

Many people think they don’t have the time to volunteer, but Devin notes that if someone is willing to give just a little bit, and put in the work, the fire company will work around their schedule.

Devin is set to graduate from Rowan University’s School of Osteopathic Medicine next year, while Molly will earn her nursing degree from Wesley College in May. Despite their busy schedules, they both see themselves volunteering in the fire service for a long time yet.

Join a passion for firefighting and a tradition of volunteering with a fire company in Gloucester Township – sign up at www.FirefightersofGloucesterTwp.org. 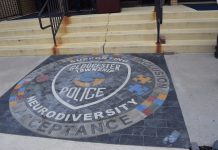