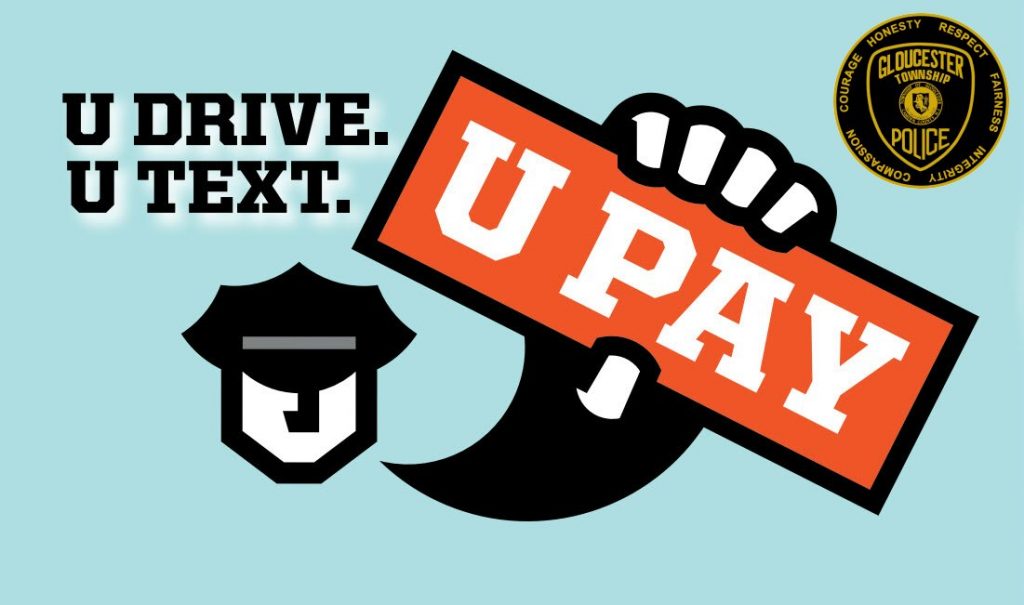 Release according to the Gloucester Township Police Department.
Beginning April 1, 2021 and running through the end of the month the Gloucester Township Police Department will be cracking down on distracted drivers during April as part of New Jersey’s “UDrive. UText. UPay.” enforcement campaign. Officers will be assigned to conduct proactive enforcement operations utilizing marked vehicles, unmarked vehicles as well as plain clothes officers to identify motorists who engage in dangerous distracted driving behaviors such as talking on hand-held cell phones and sending text messages while driving.
According to The National Highway Traffic Safety Administration in 2019 distracted driving killed 3,142 people – a 10% increase from 2018! Additionally an estimated 400,000 people were injured. In New Jersey, driver inattention was listed as a contributing circumstance in 50 percent of the state’s crashes in 2018. Driver inattention was in fact listed as a contributing factor in crashes at a rate seven times higher than that of the next highest contributing factor (speed).
Distracted driving is any activity that diverts attention from driving, including talking or texting on your phone, eating and drinking, talking to people in your vehicle, fiddling with the stereo, entertainment or navigation system — anything that takes your attention away from the task of safe driving. Texting is the most alarming distraction. Sending or reading a text takes your eyes off the road for five seconds. At 55 mph, that’s like driving the length of an entire football field with your eyes closed.
For more information regarding the problems related to distracted driving please visit the National Highway Traffic Safety Administration at https://www.nhtsa.gov/risky-driving/distracted-driving