When Haddonfield resident Kim Otto offers you an egg in these trying times, it’s not just a throwaway line from a long-running, basic-cable network comedy. It’s a handcrafted, holiday-themed work of art.

Otto, a Haddonfield resident for almost three decades, has only recently tapped into her Ukrainian ancestry by making pysanky, or Easter eggs with intricate designs affixed to them using dye wax and a special writing tool.

Starting out like generations of children, Otto best remembers the old Paas egg dyeing kits that often left as much a mess as they did color on the eggs. She first tried her hand at making pysanky four years ago, when her mother passed away.

“I regretted asking not her more questions about my heritage,” Otto said during a March 15 conversation with the Sun. “When I was growing up, I remember seeing the eggs in my grandmother’s house, but never learned, and my mother never made them.”

In an effort to learn more about the tradition, Otto took it upon herself to make headway, buying some books and tools, then starting to develop the skills and patience needed. It’s been an imperfect process.

“There was so much trial and error when I started, and there still is at this point,” she mused.

To cut down on waste and to ensure there is no doubt about the edibility of the eggs, Otto only plies her trade on empty shells. For centuries and until this generation, Ukrainian families made their own dyes from locally-grown foodstuffs  safe for consumption, like using beets to make a deep red color. Otto laments that modern dyes aren’t safer and that the overall quality of eggshells has also deteriorated.

Otto uses what she called the wax resist boutique method. She starts with an ordinary white egg and sketches out a design. A candle is nearby to melt the wax. Then she holds a special tool called a kistka, which has a funnel on one end that is dipped into the wax. Once the wax is passed over the candle to melt so that it can be passed through the other end, the tip is passed over the design.

The process itself has a specific distinction.

“Pysanky comes from the Ukrainian verb ‘to write,’ so I say I write on all the areas with the beeswax: I don’t paint them,” Otto explained.

After the first wax application, Otto submits the egg to its dye, progressing from lighter to darker colors. She usually chooses yellow first. Following the first dye, Otto follows by writing with wax on areas of the egg she wants to remain yellow. She repeats that step until the egg is complete, and for the final step, she melts all the wax off the egg to reveal the full design and its color scheme.

Otto has been involved in some capacity with The Haddon Fortnightly for a little more than a decade, and currently acts as first vice chair of the organization’s evening membership department.

Her eggs have been entered into competitions with other women’s clubs across New Jersey. The Fortnightly is one of 25 organizations that participate in the Garden District of the state’s Federation of Women’s Clubs. 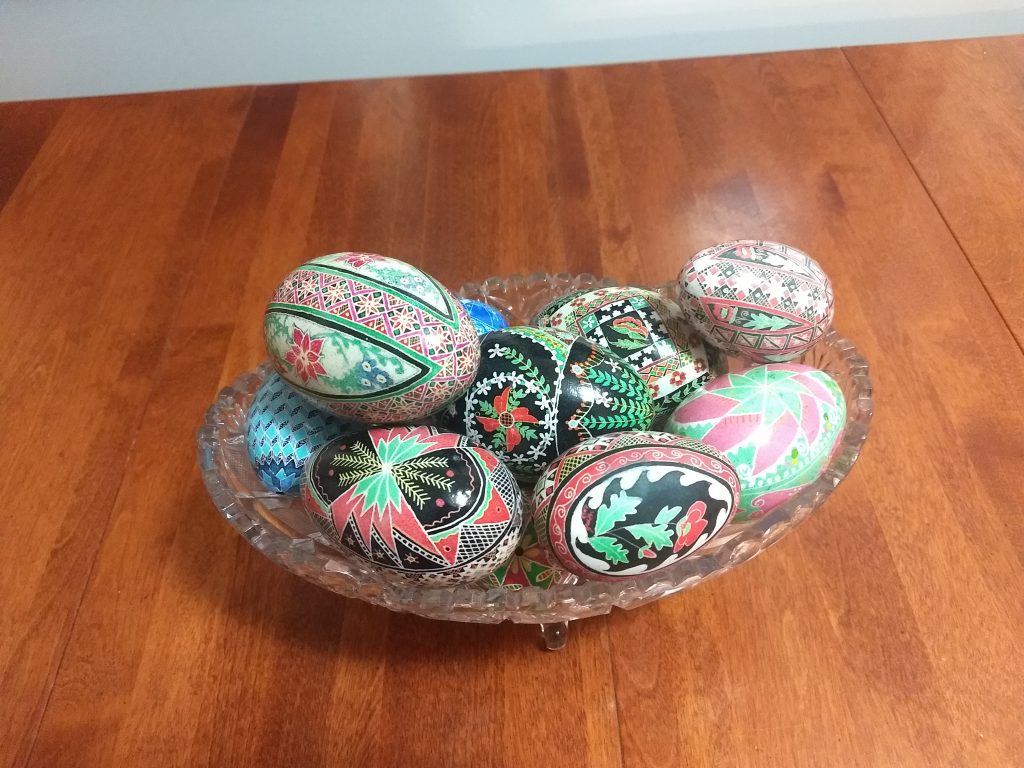 Rather than focusing attention on her award-winning designs, Otto stressed the importance of keeping tradition alive through tough times.

“One of the long-held superstitions regarding the art form is that peace, love and harmony depend solely on the existence of pysanky and those who write them,” she noted.

“I certainly had a lot more time to write. During those dark days, I did have a sense of hope while working on the eggs.”

Otto revealed that a year ago, she was prompted to write more traditional designs, because her mood, the state of the world and the sudden need to fill up free time in quarantine allowed for it. This year, her designs have taken on a more creative and whimsical side.

“I think that my process is a good indication that we are finally, with the emergence of the vaccine, having more hope. I can see us coming out of it,” Otto  added.

“It’s interesting that we don’t start to keep these traditions until the people who knew them have passed.”