A Berlin Township man has been charged for his role in distributing fentanyl to another man who then died of an overdose hours later, according to Acting Camden County Prosecutor Jill S. Mayer and Berlin Township Police Chief Wayne Bonfiglio.

Christopher Mauger, 31, of Berlin Township, has been charged with one count of first-degree Strict Liability for Drug-Induced Death.

Police were called to the 100 block of Pine Avenue in Berlin Township on Oct. 13, 2020 for a report of a man needing medical attention. When they arrived, they found Sean Abronski, 31, of Berlin Township, unresponsive. Abronski was pronounced dead at the scene.

The Camden County medical examiner later determined Abronski died of acute fentanyl intoxication and the manner of death was accidental.

Through a subsequent investigation, detectives uncovered numerous text messages, on various dates between Abronski and Mauger detailing multiple instances of heroin sales, including a distribution on the night of Abronski’s death.

Mauger was charged on Feb. 26 and taken into custody by Berlin Township Police after being located at a vacant gas station.

“The evidence in this case made it clear that Mauger was the only person who supplied the victim with the drugs that caused his death,” said Mayer. “Our investigation revealed that Abronski was with his family from the time he arrived home from work except for a 15-minute window where he met the defendant outside, and within hours he had died of an overdose. Our sympathies are with the victim’s family and it is our hope that the charges in this case will help prevent future overdose deaths.”

Mauger was transported to the Camden County Correctional Facility where he is awaiting a detention hearing. 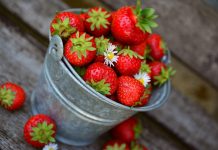 Strawberry festival on May 22