As the calendar drifts slowly from winter into spring, many high school seniors will be celebrating the end to their hard-earned academic accolades, their college selections, and look forward to slacking a bit.

That’s not the case for Palmyra High School seniors Ellie Lake and Andrew Yansick, who decided to remain proactive and become student representatives to borough council for the first part of 2021.

Both students were courted for their current role by their predecessors: Yansick by Patrick Tait and Lake by Kaya Robinson. Both see their positions as a prime opportunity to be involved with town government and to represent the high school as a student and as a leader.

“It’s a great opportunity to connect and to inform them what’s going on in school and learn what’s going on in our town. Just to be able to voice your opinion, and to speak for not only us, but for the rest of the student body,” Lake added.

Yansick is no stranger to the confluence of academics and politics. He’s been involved with student government since middle school and currently acts as president for the high school. He wanted to further utilize and enhance his leadership skills, because it fits in with his future plans.

“I’ve been thinking of (enrolling at) Penn State and University of Virginia. As far as a major, my first choice would be computer science with a possible minor in psychology. I’ve also considered majoring in political science,” he revealed.

Lake also approached student representation as a means to broaden her horizons and get a leg up against the competition, admitting, “A lot of times when you fill out college applications, they ask you what you’re interested in, and you have something like this prior to going into college, it’s easy to want to take that opportunity.”

Not content with staying in familiar surroundings, Lake’s top choice for next fall is Bloomsburg University, where she plans to study speech pathology and audiology.

Of course, taking on the responsibility is one thing. But when the cameras are on, learning how to deal with being in the room as young people, alongside adults, can be daunting. When borough council meets online for its monthly public sessions, the pair get to share the spotlight as equals.

“It was a good feeling to be involved with the adults, since you’re just a teenager. You have a lot of responsibility and a lot of say. It’s good to feel like you’re taking part in (the process) and I appreciate that,” Yansick said.

Lake added, “I want to listen to what the kids our age have to say, and to try and voice those concerns to the council, so they can implement things around here to accommodate them.”

Last summer, a Black Lives Matter rally and subsequent open public forum arose thanks to Robinson’s experiences at the high school as well as the work of others similarly concerned. This year, however, neither Yansick nor Lake think anything big enough lurks on the horizon to take their questions to a higher authority just yet.

“Recently, there hasn’t been any major changes. The town’s been doing a great job. When we tell them what’s going on in school, (council) takes that into consideration with their decisions. As of right now, things are going great,” Yansick noted with Lake’s agreement. 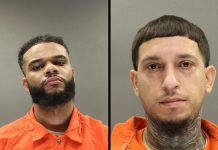