The year 2020 was full of surprises, good and bad. In Williamstown, this year taught the community how to come together in new ways, brought talents and acts of kindness into the limelight and allowed schools to create new and unique ways of learning. Here are the stories that made headlines across Monroe Township.

The Gloucester County Sports Hall of Fame, which has inducted nearly 500 local residents to date, celebrated its 40th year in the community in January.

Teena Walls Bunton, a former Williamstown High School and University of Alabama track sprinter who ran on the USA National Team and is a USATF Level II certified coach and official, was one of this year’s inductees.

“It’s amazing,” said Committee President Gus Ostrum. “We’ve had a lot of people help with this over the years. Sometimes you think you’re going to run out of really good people to induct, but that’s never the case. There’s just an amazing pool of potential inductees and candidates out there.”

Two other local students were recognized this year for their outstanding performance in school sports. Williamstown High School senior thrower Dan Manion never planned on competing in track and field when he entered high school. After playing football in the fall of his freshman year, he tried out for the basketball team in the winter. “I got cut my freshman year,” Manion said. “Since my older brother did track throughout high school, my goal was to try it. I ended up liking it.” Three years after Manion first picked up a shot put for the first time, he was one of the best throwers in South Jersey entering 2020.

Williamstown Middle School’s Marquez Campbell has been an inspiration at the school. The eighth grader didn’t let autism stop him from succeeding and he was nearly unbeatable in his first year of wrestling.

“He’s got a drive that’s contagious,” said Williamstown Middle School wrestling coach Tom McAvoy. “They’re motivated and inspired just by him going out there and giving it everything he’s got.”

The penultimate week of August was a pivotal one for a possible return to high school sports in pandemic-plagued 2020. Within the span of four days, Gov. Phil Murphy gave his endorsement in a press conference and left the decision up to the NJSIAA. The organization then tweeted that it was “game on,” mapping out the current plan on its social media site.

The sports that the NJSIAA’s plan affected the most were fall indoor sports, girls volleyball and gymnastics. They are currently scheduled to take place in a new season – between winter and spring – that will begin on March 3. Officials are trying to put a plan in place for the spring, too, that would allow athletes to continue playing multiple sports. Williamstown’s McKenzie Melvin, for example, was a crucial member of her team’s state championship volleyball team in 2019, but will play softball in college.“It’d be really unfair to put her in a position where she’d have to pick between the two sports,” Williamstown volleyball coach Chris Sheppard said.

After escaping COVID-19 unscathed last spring — the high-school wrestling season wrapped up less than a week after schools shut down last March — one of the area’s most popular winter sports experienced some whiplash a week before Thanksgiving (and two weeks before the season was set to begin).The NJSIAA announced on Nov. 19 that the year’s wrestling season will no longer take place in the winter. Instead, it will fall under the newly formed hybrid season between winter and spring, when girls volleyball and gymnastics, two traditional fall sports, will also take place. During the 2020-’21 school year, wrestling will begin (matches start on March 15) a week after the season normally ends.

When the pandemic hit Williamstown in March, the Monroe Township Police Department changed its routine to help keep residents and officers safe. Some of these changes include avoiding shift crossover to prevent cross-contamination as well as briefings held outdoors. Officers also announced they would ask residents to step outside when requesting assistance from an officer.

“Be patient, be smart,” Chief James V. DeHart advised. “Social distancing is very important. Stay inside as much as you can. Try to enjoy your life and family within the home and outdoors in the surrounding area.”

With restrictions in place, residents of the community had to make tough decisions about how to remember their loved ones when indoor gatherings became limited. An executive order issued by Gov. Phil Murphy in mid-March reduced public gatherings to 10 people and challenged area funeral homes, who became accustomed to social distancing measures as they offered support to grieving families. “We try to be extra compassionate and be comforting without violating any guidelines,” said Pamela Bowers, director of Kain-Murphy Funeral Services in Haddonfield. “If a person passes away and they have a spouse, only the spouse can go in and not the children.”

Many families postponed arrangements while others opted to conduct funeral services via Facebook Live that allowed for more families and friends.

COVID-19 has physically kept people apart, but has also brought them together in unexpected ways. Cinnaminson resident Angel Smith started the Facebook group PPE Sewing for COVID-19 in March, after seeing that front line workers were running out of personal protective equipment in the height of the pandemic. The group gained over 175 members, including residents of the Williamstown community. Some members sewed, some picked up and delivered masks and others tracked down materials. Smith estimated receiving about 1,800 masks from the group, not counting about 700 more members sewed and delivered to medical workers themselves.

When COVID-19 caused restaurants across the state to close their doors in March, most of them resorted to delivery and takeout orders to keep running. Once Gov. Murphy started Phase 2 of reopening the state on June 15, restaurant patrons were able to return to their favorite eateries for outdoor dining only. Each restaurant developed its own guidelines for keeping staff and customers safe. Procedures included hand sanitizing stations, tables placed 6 feet apart, mask guidelines and temperature checks for staff. Restaurants also found  other ways to keep customers safe while dining. Cinder Bar in Williamstown brought in a remediation company to fog the restaurant,   creating a deep clean for the tables and dining area.

The Pfeiffer Center opened its doors on Sept. 8 for the first time since March, welcoming back senior residents in the area to rejoin friends after months of separation. “Seniors get tired of sitting home; they get depressed and bored,” said Lisa Christman, of Community Affairs. “Before COVID-19 hit, seniors were invited to the center regularly to play games and do crafts,” she added. “Now that the restrictions were slowly being lifted, seniors were able to get out of their houses and enjoy quality time with other residents of the community.”

Natasha Kargbo Jr. and Megan Curry spearheaded a peaceful march in Williamstown on June 6 to support the Black Lives Matter movement. Coming together in a matter of days and primarily promoted through Facebook, the event easily drew upward of 400 people, with participants marching down Main Street before being joined by a group from a silent vigil at the Pfeiffer Community Center. Everyone then congregated at town hall on Virginia Avenue for a program of speakers and prayer. With the help of councilman Cody Miller, the protest was backed by the Monroe Township Police Department, which closed roads and provided staff to keep the protestors safe. “When both groups met up on Main Street, I actually cried,” Miller said. “And I cried because our community came together. We had a peaceful march for our Black Lives Matter movement, and the police chief, the township — everyone was very receptive to it.

“This is about equality and social justice and the fact that we’re not there yet as a society,” he added. “Our community and our township show that we know this is an issue, and we’ll work diligently to try to address it locally.” 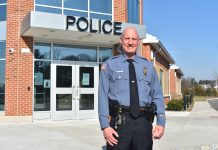 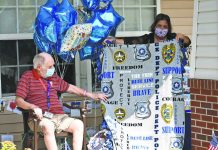