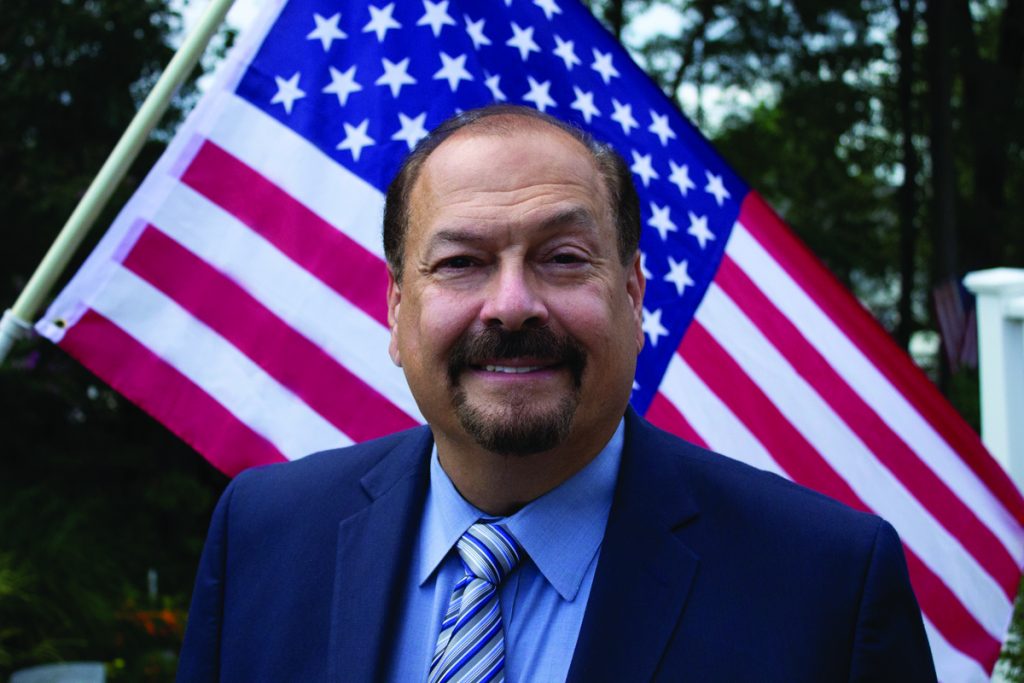 Newly elected mayor of Delran Township Gary Catrambone greeted his new constituents on Jan. 2 by saying that once the pandemic is over, he wants to reconnect in person with the community.

“So that you know me, and that you know council as our representatives,” he said. “But I also want you to know us as your friends and neighbors.”

Catrambone, sworn in by state Assemblyman Dr. Herb Conaway, during a socially distanced ceremony at the township municipal building, prefaced his remarks by acknowledging the year 2020 was “not at all what we are used to.”

In paying tribute to the various groups within the community as well as various professionals who helped weather the last 10 months, the new mayor said:

“We’re extremely fortunate to have so many smart, talented people working with us. I’d also like to thank the people on the ground in Delran: the police, public works, EMS and fire departments for their level of responsiveness and commitment to public safety in this once-in-a-generation pandemic. Our friends in organized labor who have not only provided an incredible workforce for the Delran residents, but also work with us as we navigate this unprecedented time.

“I feel great knowing this incredible group of talented people will lead the way to an even better Delran,” Catrambone added. “I cannot wait to continue to work with you.”

Among the initiatives mentioned for his term, the newly minted township boss revealed he would “demystify the process of government” through impending weekly podcasts, envisioned as an open forum between him and Delran residents.

Catrambone also mentioned former councilman Mike Mormando, who recently relocated for family reasons to a home outside his old district. Catrambone further stated he believed the township would be served by Mormando in another capacity in the near future.

U.S. Sen. Cory Booker joined the meeting via Zoom, stating, “Allow me to thank everyone for your leadership. There are multiple roles here present, and I’m honored to be with you as one of my first official acts of 2021, to have such a privilege.”

Councilman Tyler Burrell, sworn in remotely by Booker and later unanimously appointed council president, was recognized by the senator.

“Tyler, today, is making Delran history by becoming the youngest council president in the township,” Booker revealed. “And I would dare say, that in the pantheon of American elected leadership, he is one of the exciting rising stars.”

Burrell began his introductory remarks by recognizing his family for its continued support and encouragement, noting he would not be where he is today without the family’s sacrifice. He continued by praising his fellow legislators.

“I’d like to thank our running mates, Mayor Catrambone and Councilman Jeney. It was a pleasure to work on such a substantive, issue-based campaign with both of you,” Burrell said. “I’m thrilled to begin my second term on council, and I’m looking forward to what we can do for (the next) four years.”

Burrell’s wishes for his next term in office include embracing 21st century technology to remove any barriers to good government, the rapid sharing of information to keep residents informed, and finding ways to minimize the tax burden so a diverse swath of New Jerseyans can find a home in the township.

“We start our pursuit of perfection in Delran today,” he added.

Also new to council, Lynn Jeney was sworn in in person by state Sen. Troy Singleton and acknowledged his long track record of residence and service to the township in a prepared statement.

“I want to thank Delran residents for their confidence in me and for electing me to this office,” he noted. “I’ve enjoyed being a Delran resident for over four decades. Our community is a proud community and rightfully so. I’m excited to be a participant in continuing to shape our community into a gem of Burlington County.”

In other township appointments, Thomas Lyon was given the unanimous nod to assume the role of council vice president. Jeffrey Hatcher was also again appointed as the township’s business administrator, for a term lasting until 2024.

“New Jersey, more than ever in my lifetime, has been relying on our local leaders to help us through the difficult days of this pandemic. They, as local officials, swear this oath to this great township,” Booker stated.

“I think there was a tremendous renewal of hope and promise for us, not only enduring these awful times, but also overcoming them and making for better days.”

As a gesture of goodwill, Catrambone said he would extend his own family’s motto, “We’ll figure it out,” to the residents of Delran, in pursuit of better governing, communication and well-being.

Full remarks from all elected officials, as well as agenda items from the meeting itself can be found by visiting: https://livestream.com/delrantownship/events/9471656/videos/215576058.