What would you do with a 300-year-old oak tree destroyed by Mother Nature’s fury that threatened life, limb and property? Get rid of it as fast as possible? Hack it up for kindling and firewood?

The Rotary Club of Haddonfield has come up with a novel solution, one that’s intended to benefit generations of young minds. The Black Oak Project was created to turn a negative into a positive, transforming an object of destruction into one of inspiration: a reading table for Haddonfield Public Library. Library Director Eric Zino is a Rotarian whom chapter president Denise Stuart said enthusiastically supported the idea.

“This one was from Lake Street, which completely crushed a house,” she revealed in a conversation with the Sun on Nov. 23.

Stuart said The Historical Society counted the rings and confirmed the tree’s age. The organization wanted to take a huge chunk of it, but Stewart thought it would be a good idea for the Rotarians to acquire a piece as a historical artifact.

“We wanted to donate it to the library and document the whole process,” she added.

The June 3 derecho was the culprit, turning an otherwise nice day in June into a tangled mess of downed trees and power lines caused by gale-force winds and heavy rains.

“The woman who owned the house called to warn her daughter, who was studying, to get out of the house, and she did, minutes before the tree fell and crushed it,” Stuart recounted.

Longtime resident David Hunter is part of the project team, and he contacted Jeff Braddock in Moorestown, who had previously made a countertop now in use at Kings Road Brewery. Fellow Rotarian Paul Schmeltzer, who works for Bartlett Tree Experts, possessed the heavy equipment necessary to remove the tree.

But the continuation of COVID-19 prevented the trio from getting on the same page. The tree stayed on the Lake Street property all summer, to the point where the owner of the house had the borough come and remove the offending chunk.  Hunter ended up rescuing the tree and Schmeltzer relocated it to a Bartlett property in Sewell, per Stuart.

It took until the second week of November for Braddock to break out his gigantic band saw, to slice the oak into small enough pieces for easy transport.

Even so, it will be quite some time before the project comes to fruition.

“Braddock now has the wood, and another of our members found plans on how to make the table. And we think we might have enough wood for two tables,” Stuart said.

The Rotary Club also needs to undertake a fundraising campaign to pay Braddock for his work on the project, but that won’t happen until he provides an estimate.

“Even fresh wood has to cure for a while after it’s done, and that would add to the cost. It would be a while after that before the installation,” Stuart continued.  “One of the things planned to be built into the design is multiple internet access plugs.”

When the table is complete, it is expected to be placed in one of the front rooms on the Tanner Street side of the library, with all the documentation and photos  and the whole story behind its creation.

“So all of these things are to be determined, and the virus has slowed down all these processes,” Stuart noted. “It’s going to happen, most likely by the summer. And we’ll have a ceremony, and invite people to come out, if we’re allowed.” 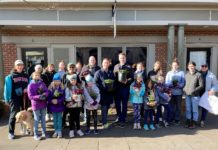