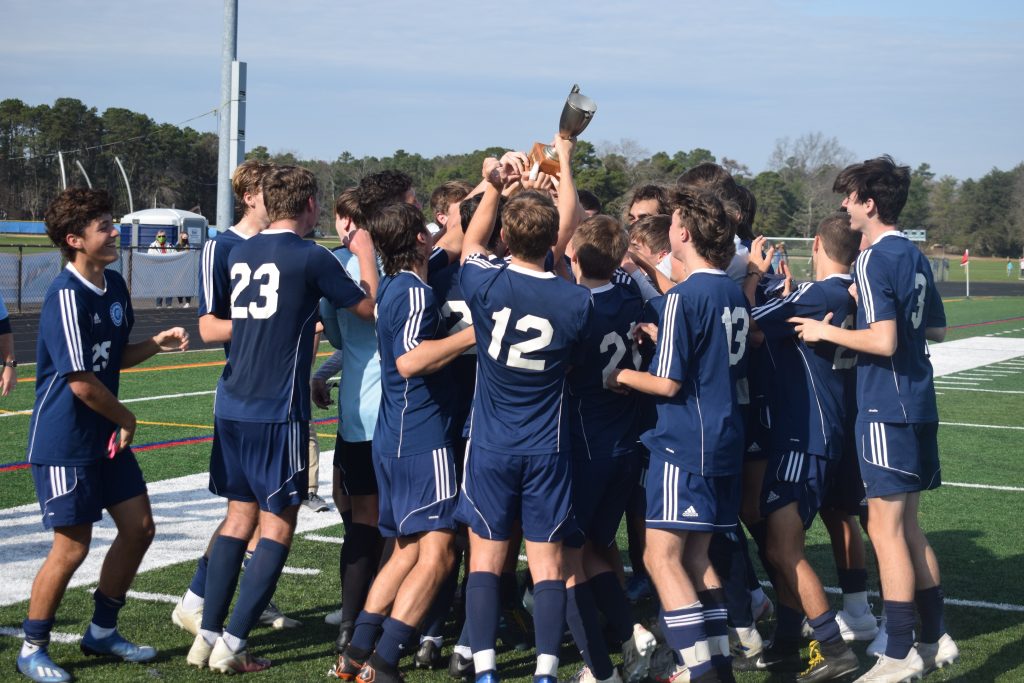 COVID-19 was to blame for a high school sports season that in no way resembled past years, but the Shawnee High School boys soccer team can look back with pride about what it was able to accomplish over the last several weeks, becoming one of the strongest teams in the state after a historic 2020 run.

The Renegades (10-1) defeated Cherry Hill East in the Southwest Group E championship game 2-0, showcasing both their top-notch defense and superior ability to control the pace of a game. The victory on Saturday clinched Shawnee’s first sectional title since winning the Group 3 in 2006.

Shawnee head coach Ryan Franks said the victory was emblematic of how the team played for the majority of the season, but much credit should go to the guys who haven’t had their names in the score sheet following games.

“From start to finish, I think it was a good performance from us,” Franks said. “Looking back, the guys who haven’t gotten enough attention this year deserve a lot more credit … We’ve won a lot of games, and the guys that have scored goals always get a lot of credit for that, but now in the last nine games, we’ve only allowed one goal.”

Franks credited goalie Daniel Ferrer, who had 13 saves, as a major  reason why Shawnee (10-1 in 2020) played so well the past several weeks. He acknowledged midfielder Charlie Kitch’s exceptional play, too.

“Dan Ferrer deserves some of that credit for sure: He had a good day today,” the coach said. “But I think Charlie Kitch deserves a ton of credit as well. His brother always gets mentioned, being the goal scorer up front, but there’s a reason we’re winning so many games and part of it is that we haven’t allowed goals. I think Charlie’s been one of the best, if not the best, center back in South Jersey this year.”

About midway through the game’s first half, there was still no score. Ferrer saved a penalty kick to his left from Cherry Hill East’s Luke Kuehrs, the team’s leading scorer, following a foul in the box.

The moment was a momentum boost for Shawnee during the remainder of the game, with forward Alex Johnston scoring what would be the game-winner less than two minutes later on a pass from Gavin Matesich that slipped between goalie Matt Mueller’s legs. Shawnee maintained control from that point on.

The goal was Johnston’s first of the season and only the second of his career.

“It was great to see A.J., who’s been working hard all year, get the game winner,” Franks noted. “He had a goal last year and he’s been working for one this year, just hadn’t been able to find one but, heck, he picked a great time to tuck one away.”

“I’d been searching for that all year,” Johnston said with a chuckle after the game. “I had a few unlucky chances throughout the year, but today I saw the opportunity and I took it. It was a relief to be able to score one, especially in the championship like this.”

Looking back at the season as a whole, he said the chemistry cultivated by the players helped them as a team to keep working hard when together and apart throughout a season changed by COVID.

“It was definitely difficult, but we have an amazing team and an amazing coaching staff,” said Johnston. “Everyone did their part on and off the field and everyone motivated each other and pushed each other at practice throughout the year.”

Matt Longshaw provided an insurance goal in the second half to bring the game to its final score of 2-0, and said the championship run was the perfect way to end his time with Shawnee soccer.

“As a senior that’s played the past four years for Shawnee, I feel like this is a great way to end my time here,” Longshaw said. “We became less of a team and more of a family and a brotherhood; we’re all looking out for each other on and off the field, and overall that’s really given us an advantage in games.

“This year, in particular, I feel like we really had a ton of skill players and that we were a lot more skilled than a lot of the teams we played against,” he added. “ … All we had to do was limit our mistakes in games and that would help us moving forward.”