After a forgettable spring and an uncertain summer, high school sports officially returned for the fall season last week.

While tennis got an early start by opening its season on Sept. 28, soccer and field hockey did so four days later, and football kicked off on the first Friday of October.

From Mullica Hill to Moorestown — and everywhere in between — it finally felt normal to be outside with friends and teammates, watching games for the first time since mid-March. Or at least as normal as could be amid a pandemic.

“Every step on the court is a blessing,” Clearview junior tennis player Carlee Cristella said before a match against Triton. “Every second being here. I’m just so grateful to have it because I really didn’t think we’d have a season.”

“Being here with the friends I’ve made over the last four years, it’s great, it’s fun,” added senior teammate and fellow Clearview captain Maeve Porter. “It’s kind of like a nice peace to have with all of the chaos going on right now.”

The tennis season, like the rest of fall sports, began about a month later than normal. It’ll be shorter, too, without the same postseason format the NJSIAA usually hosts.

But a shortened season is still better than no season at all.

“I totally agree with that,” Triton senior Yaria Patel said. “I know not every school (is playing), so I’m glad for this opportunity.”

While the seasons are truncated, the games remain the same. Masks worn on the sidelines are discarded when the whistles shriek to signal the start of games, at least for the players. On the sidelines at Delran High School, field hockey parents from Delran and Moorestown were required to wear face masks while on the school’s campus.

On football Fridays throughout South Jersey, the number of people who can attend games is limited. Most schools have strict ticketing policies, with parents of players and cheerleaders getting access first.

But these are all concessions (most?) people are happy to make. The main goal — getting high school athletes back on the field — has been achieved. During a pandemic that robbed them of a spring season six months ago, it’s a literal breath of fresh air.

“After seeing what happened to the boys in the spring, I feel like I had this fear in me that we wouldn’t get the same opportunity to play and I’d have to wait until college,” said Olivia Eder, a senior on Triton’s tennis team. “But it means the world to me that I’m able to at least get out here and have these memories in my senior year that I’m able to take into college.”

While schedules are underway, double checking them is recommended before heading to a game. COVID-19 remains a living, breathing virus that hasn’t gone away for good. When a student feels sick, he or she has to report it through the proper channels of a school’s administration.

Perhaps that’s what happened on Thursday, when the Delran-Cinnaminson soccer game was postponed on an otherwise beautiful afternoon.

“We had a little bit of a scare,” Cinnaminson senior captain Joe Balboni said, “so it’s better to be on the safer side of things.”

Instead of taking on rival Delran to get 2020 underway, the senior-laden Pirates were set to play Rancocas Valley in their season opener on Wednesday, Oct. 7. After waiting over seven months for high school sports to resume, waiting another week shouldn’t be too difficult.

This year’s seniors honestly weren’t sure what to expect after seeing their predecessors robbed of not only their spring sports, but senior trips, proms and regular graduation ceremonies. It was only natural to fear they might lose their fall sports seasons too.

“Until we were here on the first day, I was scared that they’d shut it down,” Ogden said with a laugh. “But I wasn’t too scared because I knew they’d find a way to get us out here.”

Although a few programs have had to quarantine within the last month — Delran, Washington Township and Lenape all had their football teams shut down for two weeks — the majority of South Jersey teams are moving forward and trying to stay optimistic they’ll continue to play, uninterrupted.

“We had a senior at our school quarantined, it was crazy,” Porter said. “I’m always so worried I’m going to get that call, someone in your class has it, you have to stay at home for two weeks. I’m most worried about missing tennis.”

The Clearview senior was able to put those worries aside a few minutes later when she took the court with first doubles partner McKenzie McDowell. Living through COVID-19 has made Porter appreciate every day, since no sports season’s tomorrow is guaranteed.

“Instead of getting in my head about things I’m just enjoying being here and playing with my partner, having fun and enjoying every single match,” she said, “because I don’t know which one is going to be my last one.” 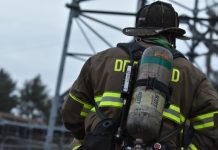 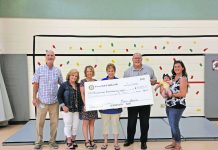 Development center gets donation from the Rotary Club of Mullica Hill 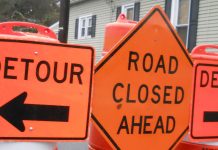