Those suffering can get positive messages 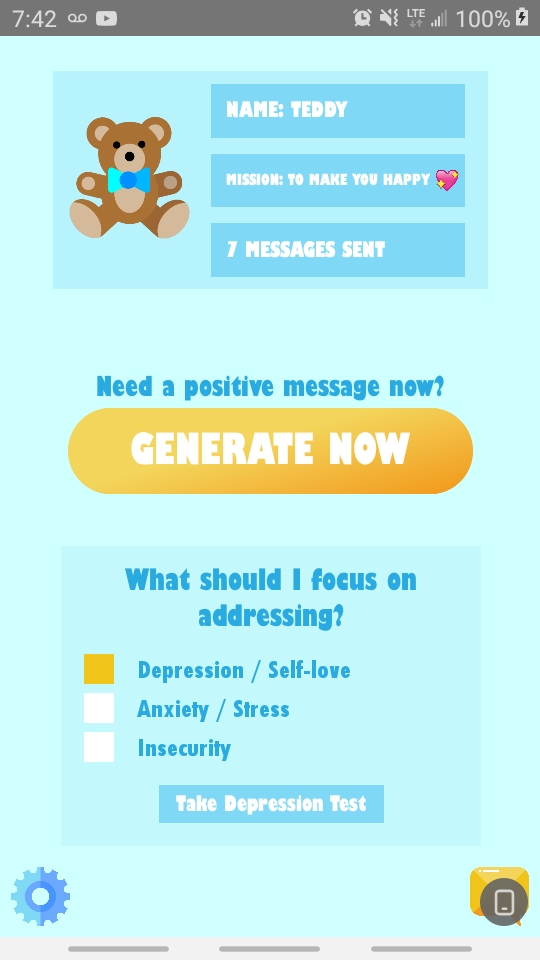 A tech-savvy senior at Williamstown High School has gone from game-making to screening for depression with a new app he created.

Daniel Ajayi used his time during COVID quarantine to create an app called The Depression Fighter. It includes a teddy bear character who sends positive messages to a user’s phone as frequently as he or she would like. The app sends specific messages based on what the user is struggling with, including insecurity and anxiety.

“I was thinking about doing a lot of different things, but I wanted to do something more altruistic,”  Ajayi said. “I wanted to create something that would actually help people more than just a game.”

Some of the app’s messages include, ‘“Your past does not dictate your future” and “No one is born perfect.” The user can like or dislike messages to help the app determine what type of messages to send.

“There is a lack of awareness for people with these issues … People tend to discredit people who struggle with them, especially because of quarantine with people being indoors,” the teen explained. “I know a few people that admitted that they are struggling with depression because of the lack of social interaction.”

The app not only helps spread positivity with creative messages, but Ajayi also included a medically approved depression screening exam. Users can take the exam through the app, and they are given a score of between 1 and 10: 1 means the user has little to no issue with depression or mental illness and 10 indicates a severe problem. The app also includes the number for the National Suicide Prevention hotline (800-273-8255).

The app also has customizable aspects that include a color option for the teddy bear’s bowtie and a personalized birthday message.

“I think this is a good way to help combat depression and to help people feel better about themselves,” Ajayi noted.

Ajayi has future plans for the app, namely using it to connect doctors with patients and relay depression screening information directly to physicians so patients don’t have to constantly visit a medical office.

“When you go to the doctor they charge you, and this app is completely free,” he said.

Ajayi has always been interested in computer technology and started creating games through Microsoft Powerpoint as a kid. He took two Java classes at his school, but his computer skills have been self-taught.

“I would make interactive games and my family thought it was cool and my friends would play,” he recalled. “That’s when I decided to get into mobile app development.”

The first app Ajayi created was called Get 24, where the user has four numbers and adds, subtracts, multiplies and divides to get the number 24. The senior’s goal is to apply to Massachusetts Institute of Technology and delve into the realm of artificial intelligence.

“It can be exhilarating to create something,” Ajayi said. “Overall, it’s a lot of fun, and I love doing it.”