In recent times, as the COVID-19 pandemic continued, 16 Haddonfield eighth grade boys were looking for a way to give back. But since the borough’s spirit of giving stretched into many areas of the community over the last five months, the group wanted to find something nobody in the community had done before.

“We’re influenced by people who are helping the less fortunate. We wanted to be leaders and not followers,” said Dean Morris. “We wanted to find a way for kids who don’t have enough money to buy sports equipment because it costs a lot at this age.”

That’s where Service Dawgs was born.

“The people who came up with the idea were me and my mom. The first thing we did was make sandwiches for Cathedral Kitchen: peanut butter and jelly, and also packaged goods. That was about a month ago,” said Chase Carle, one of the enterprising young men in the group.

Items were to be collected through Sept. 15. There were two drop-off spots, at the homes of two of the boys involved. Although they recognize the big step taken in collecting the equipment, the next step is an exercise in patience.

The potential spread of coronavirus and other germs from used sports equipment means the group has to take extra time and care to clean and sanitize everything before it is donated.

Charles Ravelli, whose house was one of the drop points, estimated he had roughly 30 pieces of equipment in his possession, while Harrison Barnes took some initiative and knocked on doors in his neighborhood to find things to donate.

“Although the kids around here are fairly young, I was able to get three to four more pieces of equipment,” he added.

Word of the charitable effort was given through both traditional and new means.

“We’re not that big yet, because we’re just starting out. But I made a poster about Service Dawgs, letting people know we would be collecting equipment. I sent that to my parents and they put it out on Facebook,” Morris stated.

Promotion is a large chunk of what makes any group effort successful, but the boys recognize that’s a big piece to the puzzle that requires more thought, especially for the intended scope of the project.

“Maybe we will have a separate Facebook page. We haven’t really thought about it that far. But now that you think about it, that’s a pretty good idea,” Morris admitted.

Added Degilio, “We’re hoping that we are going to do this as a group over the next couple years and grow with it.”

In speaking of the worth of their idea, some of the boys managed to sound older and wiser than their years.

“We wanted to do this also because of the way things in our environment are out of control because of COVID, but this is a way we can have some control over things and do some good for people,” Carle said. 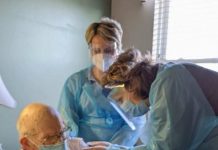