In the next few months — as long as the pandemic cooperates, of course — Sam Levin, Daniel Leonard and Luke Dorfman will begin their high school careers at Cherokee, with aspirations to make an impact on the basketball and ice hockey teams.

But the trio has already gained solid footing in the sports world, all before their 15th birthdays. Levin, Leonard and Dorfman are the voices behind Bro Cave Sports, a podcast launched this spring that has hosted everyone from former Philadelphia Flyers greats, current NBA and NFL players, surfers,  and MMA fighters, too.

“It’s a lot of fun,” Leonard said. “I feel like I’m on ESPN when I’m really just in my basement with a laptop and a couple of Google searches on that person. But I get to talk to them, ask them questions, people who I watch on TV all the time. So it’s pretty cool.”

Levin came up with the plan for Bro Cave Sports during the initial days of school closings due to COVID-19 back in March.

“It was a shower thought I had,” Levin said. “All of my good ideas come from the shower. I had been binge watching ‘All American,’ and (on the show) there was a podcast going on and I thought that was pretty cool. I was thinking what kind of podcast (I could do) and sports is really all I talk about.”

The show’s first guest was Boston Celtics veteran Semi Ojeleye. (Quick aside: Ojeleye may have the greatest collection of nicknames, courtesy of basketball-reference.com: Muscles Jesus, The Ox, Thor, The Ojeleye Factory, The Man Made of Granite).

“That episode was my favorite because I’m a Celtics fan and I’m always watching him on TV, and he’s always scoring and doing well,” Leonard said. “So it was cool to talk to him. I realized he’s an actual person and not just a guy on TV.”

Bro Sports Cave has evolved in the four months since it has been hosting shows. As of July 30, there have been 11 recorded episodes, roughly one a week.

“(I’m more aware now) of what I’m saying on air, like what I just said right there, ‘like,’ and getting things to flow with what you’re saying, playing off what the people say, and getting comfortable with the people you’re talking to,” Levin said. “When we had our first guest on I was definitely very nervous compared to having people on now.”

“Ojeleye — that guy was great,” Leonard said. “But we didn’t really know how to do a podcast. Now it’s much better, much smoother and like a real conversation, so it’s been great.”

The trio has mostly taken to Instagram to track down possible guests. Since the social media site allows for direct messaging, regardless of who follows whom, it’s provided the Bro Sports hosts with a direct line to recruit people they can interview for the show.

“We probably DM’d a thousand people and we get 10 to respond,” Leonard said of playing the odds. “I go to a team’s Instagram, see who they tag (in a post) and I’ll DM (that person). And then under their name are suggested accounts, and it’s all of their teammates and other players, so I just keep DMing. I can do that for hours. It’s just copy and paste.”

Sometimes the trio will work their own family connections, too. Maybe someone knows someone who knows a sports agent, or a former coach, collegiate athlete, etc.

“My sister’s friend’s mom is really close to their family, the Kellys, so she was able to get us in touch and he was really happy to be on the podcast and talk to us,” Dorfman said of landing Flyers Stanley Cup champion Bob Kelly.

While both Levin and Leonard are basketball players, Dorfman’s sport is hockey, so naturally his favorite interview for the podcast was with Kelly.

“It was a different point of view, because he’s an older man and talking about things in retrospect, about being a part of the Broad Street Bullies, so it was really interesting to hear from him,” Dorfman said. “(Boxer) Ray Robinson and (MMA fighter) Eddie Alvarez are Philly guys, so they were cool guests, too.”

Bro Cave Sports is off and running and has no plans to slow down once high school begins for its teenage hosts. You can find them on Instagram (@brocavesports) and their podcast on all of the most popular platforms (iTunes, Spotify and iHeartRadio, among others).

“It’s really fun, but it’s eye-opening at the same time, hearing from multiple people’s points of view on their sports, and what it really means to them,” Dorfman said. “Usually we’ll ask for advice they can give to us, and I try to apply that to everyday life, whether when we were doing online classes or with my sport, hockey, starting back up. So it’s eye-opening and a really good way to have fun with my friends.” 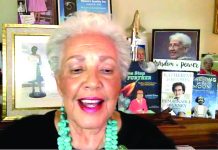 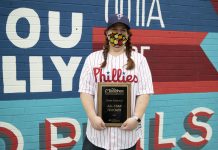 Phillies honor Sharp teacher as one of 2020’s All-Stars