Megan Brown is disappointed the class of 2020 couldn’t celebrate in a traditional manner, but is grateful for everything she and her classmates accomplished. 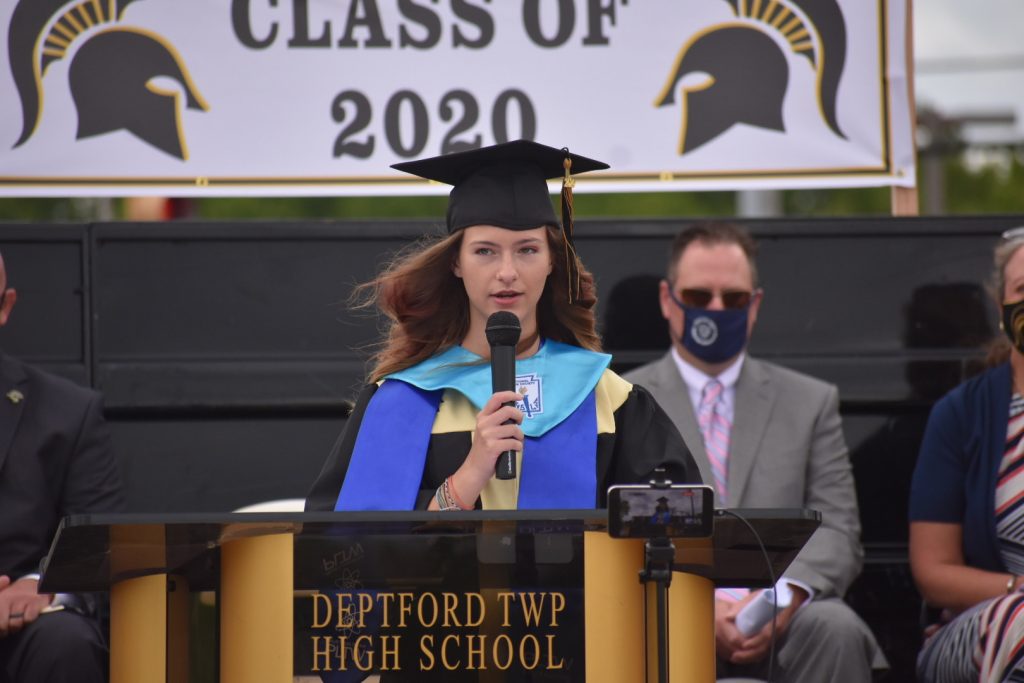 No valedictorian in Deptford Township High School history had the experience Megan Brown did last week.

On June 11, Brown stepped in front of a camera, not on stage, to read her valedictorian speech. Reading it to a camera as opposed to a crowd of hundreds of graduates, teachers, families and friends, was an experience she’ll never forget.

“But it was still a good experience too,” Brown added. “I know people took the time to get people to come out and record this … It was also really powerful, because I knew it would be reaching a lot of people and it would be a big part of our graduation experience that we still get to have.”

In addition to the virtual recording, Brown got an opportunity to give her speech in-person last Wednesday at the high school’s drive-in graduation at the Deptford Mall. The ceremony marked the conclusion of what was a very successful and fulfilling four years of high school for the class of 2020 valedictorian.

Brown exits high school with a passion in engineering. She will study aerospace engineering at Georgia Tech in the fall after going through the Deptford’s engineering program. She completed the program in her junior year.

“Georgia Tech I visited last summer,” Brown said. “They had an information session for aerospace engineering specifically as well as the one for the school in general. Their aerospace program was ranked No. 2 after MIT.”

“I really enjoyed the engineering classes that I took at the high school,” Brown continued. “Throughout those four years, they tried to help us research engineering fields and the different branches of engineering … I always liked outer space and rockets and planes. I think I would really enjoy designing things that are going to fly.”

Aside from engineering, Brown’s favorite high school classes included a computer-generated modeling class she took as a sophomore, a biomedical course she took this year and math. While Brown said English and writing aren’t her favorite subjects,  she got a lot of help from literature teacher and cross country coach Jonathan Ayer. Brown never had Ayer as a teacher, but developed a close relationship with him during her four years running with the cross country program.

“Throughout all four years of cross country, he was really involved in the team,” Brown said about Ayer. “He made sure that we were trying our best and that we always were keeping motivated. He was really inspiring to me.”

Being valedictorian is something Brown aimed for since she started high school. When she received the news about being the top student in her class, it was mission accomplished.

“I was definitely proud of myself,” Brown said. “I wouldn’t say I was surprised, but I was relieved that I finally found out for sure that all of my hard work had paid off and that I was definitely, for sure, going to be the valedictorian. I’ve been working for this my whole life.”

While graduation remains a time of celebration, the pandemic has put a damper on the experience for Brown and her classmates. She described the final weeks of high school as bittersweet, never imagining it would go the way it has.

“It’s been honestly pretty crazy,” Brown said. “We didn’t even expect the school to close down when it did. We thought we had a few weeks left. But then it closed down and we kept hoping it would open back up soon. But then it never did.”

The bittersweet feeling can’t be erased. Brown said it was very disappointing to have many of the senior year events cancelled, but she also appreciated the efforts of the community and the high school to try and make the best of the situation with the virtual and drive-thru graduations and the “adopt a senior” social media campaign.

Her commencement address didn’t gloss over the negatives. Brown acknowledged the pandemic, the ongoing Black Lives Matter movement and other struggles people have faced over the past four years. However, her message to the class of 2020 was to not be afraid to celebrate their accomplishments and to continue pursuing their passion and dreams, even in the face of adversity.

“Even though we had a really crazy year to get through, we’re lucky to be graduating,” Brown said. “We really accomplished something.”

A holiday for seniors