It was less than a year ago when Lauren D’Alessandro first started working with a 3D printer.

“I was approached by my principal to take part in this enrichment program we were doing at Centre City (School),” said D’Alessandro, an art teacher at the school for the past seven years and Mantua Township School District’s 2017-’18 Teacher of the Year.

“I was trying to brainstorm ideas and thought it would be cool that, if we were able to get a 3D printer, we could do some lessons with the third grade.”

During the planning stages in 2019, D’Alessandro imagined using the printer to add another element to her classes. She never imagined she would use it to make a difference during a world-changing pandemic the following year.

Shortly after COVID-19 forced the closure of schools in March, D’Alessandro received permission from school officials to bring the 3D printer and filament home to work on a service project. She used the printer to create more than 1,000 mask extenders, also known as “ear savers,” for health-care workers across South Jersey.

D’Alessandro embarked on the project after a colleague sent her an article about a boy in Canada who created mask extenders using a 3D printer.

“I read the article and looked up stuff and found, through the 3D community, they had this huge thing called Hack the Pandemic,” D’Alessandro said. “A lot of artists were offering their files for free.”

Hack the Pandemic was an online campaign formed in March to utilize 3D printers for the creation of personal protective equipment (PPE) for health-care workers. With files available to design mask extenders, all D’Alessandro needed to do was set up the printer at home and get started.

Mask extenders provide comfort for health-care workers and others forced to wear a mask for a long period of time. An extender is a small piece of plastic designed with notches to allow a person to attach a mask to it rather than around the ears. The extender sits on the back of the head and helps relieve the pain a person may experience after having mask straps pulling on their ears.

“Because (a mask) sits on your ears and you’re wearing it for 12 hours a day, it’s really uncomfortable,” D’Alessandro noted.

A 3D printer uses plastic filament to create a three-dimensional digital object. D’Alessandro said the trickiest part of 3D printing involves the creation of the digital object on the computer. Printing an object is simple, with the user only needing to submit a digital file to the 3D printer in the same way one would submit a word document file to a conventional printer.

After school administrators allowed D’Alessandro to bring home the printer and filament for the project, she got to work. But she quickly discovered it would take a long time to print just a handful of extenders.

“It’s a small plate you print on,” D’Alessandro explained. “I could only print nine at a time. At first, I thought it was ridiculous. It’d be a futile effort to only make nine a day.”

To get the extenders in the hands of health-care workers, D’Alessandro started by reaching out to family and friends

“My mom works at Atrium in Woodbury,” she said. “It just started off with me reaching out to people I know who work in health care. Once it got shared, a lot of parents (in the community) thought, ‘This is amazing. Would you be able to drop them off here?’” 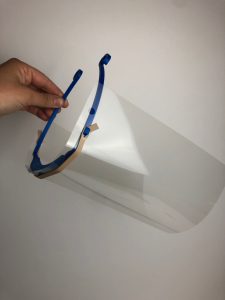 Before long, D’Alessandro’s mask extenders were at facilities all over South Jersey, including Inspira Hospital, Penn Presbyterian Medical Center, Jefferson Hospital, Cooper University Hospital and Our Lady of Lourdes Hospital. At many of the places where D’Alessandro delivered the extenders, she would receive photos in return of staff members wearing them.

“I was really surprised that some of these hospitals didn’t have these things,”    said D’Alessandro, who was grateful she could lend a helping hand during the pandemic.

Having provided nearly 1,000 extenders to a number of facilities and with PPE more widely available, D’Alessandro has slowed down her extender production. She has now shifted her focus to family members who are working in other essential jobs to provide them with the same tools she’s already provided to hundreds of health-care workers.