Last Monday, the Washington Township High School senior class received the news it had been dreading for the seven weeks since schools across New Jersey closed due to the COVID-19 pandemic: Gov. Phil Murphy announced schools would not reopen for the remainder of the academic year.

The news was disappointing for Dana Zelechoski, mother of Washington Township senior Deb Reinhardt,  and Julia Flamma, mother of WTHS senior Nick Flamma. The two saw firsthand how COVID-19 negatively altered what should be among the happiest times of their children’s lives.

“It’s devastating,” Zelechoski said. “They’re missing out on memories with their friends.”

Zelechoski and Flamma wanted to do something special for the senior class. After seeing another parent post a picture of a sign she created for her child on Facebook, Zelechoski and Flamma decided to start a campaign to allow parents across the township to have signs for their own children.

The campaign took off, with signs for 104 of the high school’s 537 seniors  produced during the first order in April. A second order was sent to the printer on Friday, with at least 32 more families ordering signs.

“We were not expecting that at all,” Zelechoski said. “At first, we were just expecting just a couple, just a handful.”

The campaign has been described as a community effort, with Zelechoski handling the details of getting in touch with families, collecting money and sending the order to Vistaprint. All signs look similar, with WTHS Class of 2020 on the top left, followed by the words We Celebrate You below.  The middle left portion of the sign features a quote from motivational speaker and author Zig Ziglar: “Difficult roads often lead to beautiful destinations.” The bottom left of the sign has the student’s name, with the senior’s photo on the right.

“I just made a few,” Flamma said. “Once you customize a sign, it’s easy to take the senior picture and just swap it in and out.”

The two parents used social media and word of mouth to spread the news about the signs. Zelechoski said she would simply get a student’s name and photo from parents through a text message and arrange for them to send her the money. Both parents took orders, with each sign costing about $40. Zelechoski and Flamma did not make any money from the campaign, making sure all earnings went toward the cost of the signs. Purchasing in bulk allowed them to keep the price of the signs as low as possible.

Flamma recalled the excitement she felt upon receiving the first order. She wasn’t sure how the signs would turn out, but upon opening the order, she was thrilled with the results.

“When they came in and me and my husband were going through them, we were jumping up and down because they came out so great,” she said.

“The product far surpassed my expectations,” Flamma added. “The signs are extremely large, they’re very clear. I’ve got nothing but positive feedback.”

The pair made sure to socially distance for the sign pickup. The two informed parents when the signs came in and then left them either outside or in their garages, so parents could pick them up without coming in physical contact with anyone

After the signs began appearing on front lawns throughout the township, Zelechoski started to hear from more parents who were interested in ordering them.

“Since the first one was such a big hit, we weren’t sure we’d even have a second round,” Zelechoski noted.

“That’s the whole thing behind all of this, to give these kids something,” Zelechoski said. “They have no closure with their friends now.

“We’re just trying to put a smile on their faces.” 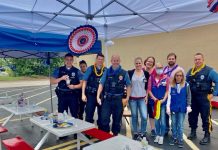