The Mantua Township school superintendent will resign effective July 31, after being hired to head the Haddon Township district 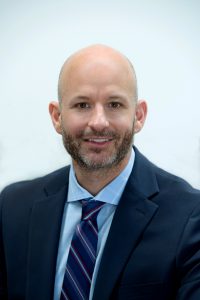 When he started his tenure as Mantua Township School District’s superintendent in August of 2014, Robert Fisicaro knew he was in the right place.

A resident of Pitman, he was selective when applying for the first superintendent job of his career, and Mantua was one of the districts near the top of his list.

“I was well aware of the excellence of the schools in Mantua Township,” Fisicaro recalled. “I had young children at the time and was looking at the time to become a district leader.

After nearly six years at the helm in Mantua, Fisicaro is now entering the final months of his tenure. He announced his resignation after he was approved as the new superintendent of Haddon Township School District on April 8.

“It’s been an amazing experience,’ Fisicaro said about serving as superintendent in Mantua. “It was a very difficult decision. I could have stayed in Mantua for a very long time.”

Fisicaro entered Mantua Township with a wide variety of educational experience. His job previous to the superintendent role was with the New Jersey Department of Education, where he served as the lead implementation manager in the office of evaluation. Prior to that, Fisicaro served as a principal and assistant principal in the Logan Township School District and as a math teacher at Rosa International Middle School in Cherry Hill.

Fisicaro believes his time in Mantua taught him how important it was to mold students into well-rounded individuals; education, he says, is not measured merely by test scores. A focus on character development in Mantua Township paid off in 2018, when the school district was named a National District of Character by Character.org.

“I’m proud that in the last three years, we’ve really emphasized the education of the whole child,” Fisicaro noted. “We’ve had a strong commitment to character education. We’ve had a strong emphasis on school safety. We have a common instructional language (among the staff).”

Fisicaro talked about numerous accomplishments he was proud of during his time in the Mantua district, including the implementation of full-day kindergarten, followed by the expansion of preschool into a full-day, tuition-free program.

“Despite having a reduction of state funding … we have not had to reduce staff or programs,” Fisicaro said. “Part of the reason we were able to do that is because we were successful in the expansion of our preschool program.”

Fisicaro also talked proudly about the district’s high language arts test scores, its expanded art and pet therapy programs and how it established a good relationship with the Mantua Township Education Association. Fisicaro emphasized how MTEA members did not work without a contract at any point during his tenure.

Fisicaro also spoke highly of the Mantua Township Board of Education and thanked it for giving him support from the day he began working in the district.

“The superintendent position is a very complex role, but the board of education was very supportive of me from the day I walked in until now,” Fisicaro said.

“Dr. Fisicaro has been a true asset to Mantua Township School District,” board of education President Bonnie Nuss said in a statement. “The leadership he brought to the district has been invaluable. He committed his time to ensure quality education was accessible to all students and a safe learning environment was provided to all students and staff. Dr. Fisicaro will be missed in Mantua.”

The superintendent looks forward to his new opportunity in Haddon Township. It will be his first superintendent position in a K-12 district and also brings him close to the area where he attended school as a kid. Fisicaro went to grade school at St. Rose of Lima in Haddon Heights and attended high school at Bishop Eustace Preparatory School in Pennsauken.

“It’s very very similar to Mantua Township in demographics, but it is a K-12 district,” Fisicaro explained.

In a statement released by the Haddon Township Board of Education following Fisicaro’s hiring, the board cited his “previous academic experiences, community engagement and willingness to tackle education challenges” as the reason he was named the district’s new superintendent. Fisicaro said he learned a lot about those areas during his time in Mantua and believes the school district will “continue to soar” in the future because of the commitment from the community.

“Thank you,” Fisicaro said in speaking to the school community. “It’s been an honor to lead the district the past six years.”

Fisicaro will remain in the superintendent position in Mantua through July 31. His tenure as superintendent in Haddon Township will begin on Aug. 1. The Mantua Township Board of Education plans to release more details in the near future about its upcoming superintendent search.