“I may not have gone where I intended to go, but I think I have ended up where I needed to be.”

That quote from British author Douglas Adams was the backbone of Rowan College of South Jersey student Candice Giunta’s campaign as she made history by becoming the first student in her school’s history to be elected New Jersey State President for Phi Theta Kappa, an international honor society for students attending two-year colleges.

The Adams quote is also an accurate description of Giunta’s journey in life. Formerly a Williamstown resident and now living in Runnemede, Giunta is a 29-year-old married mother of three who had to overcome many obstacles to make it to college and become an influential member of RCSJ’s campus. During her campaign to become PTK’s New Jersey State President, Giunta opened up publicly about the darker moments of her life, offering a transparent and honest look at her journey from troubled teenager to standout college student.

“It ended up being based on my life and trying to be real and genuine with everybody,” Giunta said about her campaign.

From juvenile detention to Rowan

During her campaign, Giunta described how she was a troubled teenager as early as 13 years old. Legal issues caused Giunta to be sentenced to a juvenile detention center for two years at the age of 14. After her release, Giunta went to Victory House of Ranch Hope in Williamstown, a Christian-based social services facility where she stayed for a period as she transitioned out of juvenile detention. Motivated by people who told Giunta she would end up incarcerated again, she became a practicing Christian, completed the Victory House program and has not been in legal trouble since. She returns to Victory House now as a mentor to its current residents.

“I’ve been able to share the incarcerated part for a long time, but I never did outside of family,” Giunta said. “It was challenging at first.”

Giunta faced further obstacles after completing the Victory House program. At the age of 18, she had her first child and had to embark on the new journey of motherhood by herself after the baby’s father left her when she was three  months pregnant. Struggling to pay her bills and make it through life, Giunta experienced more trauma at the age of 19 when she was raped.

About four years later, Giunta was the mother of two children living at home with her parents in Williamstown when she enrolled in Rowan College of South Jersey, then known as Gloucester County College. Giunta immediately fell in love with the campus and said the school “felt like home,” but there were still struggles.

“I was deciding if I was going to be a police officer,” Giunta recalled. “I had some family friends who died in the line of duty. That was my inspiration.”

Giunta didn’t stay in the program for long. After one semester, she withdrew from school and instead opted to get married, settle down with a family, focus on her full-time job at Harrah’s Philadelphia Casino and become financially independent.

Over the next four years, Giunta’s family moved to Runnemede and was able to settle down and establish some financial stability. Giunta had her third child in 2015 with her husband and, two years later, she was ready to return to school.

Despite not living in Gloucester County, Giunta was intent on returning to RCSJ and willing to pay the out-of-county tuition fee to do so.

“I was really comfortable with the campus,” she said. “I have anxiety, so new places are something I’m not fond of.”

It took a little while for Giunta to discover what she wanted to study. After changing her major numerous times, she finally settled on business studies.

“I always had this goal of one day owning my own business,” she noted. “I knew I wanted to be an entrepreneur at some point in my life.” 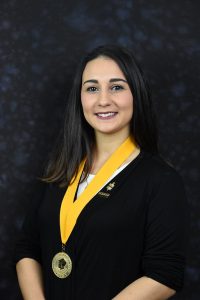 Last year, Giunta joined RCSJ’s Alpha Psi Pi Chapter of Phi Theta Kappa for the first time. Phi Theta Kappa is an honor society focused on four pillars: scholarship, leadership, fellowship and service. Shawn Rutter, one of the advisors for RCSJ’s chapter, said the organization not only gives students the chance to be part of a club, but also the ability to apply for scholarships and participate in a wide variety of service activities.

Giunta attended her first PTK meeting after getting an email inviting her to an event. She was hooked right away, having stayed well after the meeting to talk to members and club advisors.

“What I admired about Candice most was she sat back and observed,” Rutter said. “She took mental notes, she watched how people engaged, she got the culture and the climate of the chapter down and utilized that to her advantage throughout the year.”

Giunta was appointed corresponding secretary shortly after joining the chapter and cultivated a tight bond with the advisors and members of the executive board. That led to Giunta eventually running for and being elected chapter president for the 2019-20 school year.

The service aspect of PTK is what attracted Giunta most to the organization. She describes herself as a helper who wants to one day start a business and use it to support charities and nonprofit organizations.

“Service is what motivates me,” Giunta said, discussing the first service event she participated in, an American Red Cross blood drive. “I like to help people. When I did the blood drive, that gave me a chance to help.”

Giunta led the way in having PTK partner with Washington Township nonprofit Wigs for Wishes, an organization that provides wigs to and grants wishes to cancer patients. In addition to fundraising for the organization, Giunta organized a group of PTK volunteers to staff Wigs for Wishes’ annual gala, the organization’s biggest fundraiser of the year.

“We started hosting fundraisers,” Giunta said. “We did pretzels sales, chocolate sales; we would start selling stuff and doing things for them.” 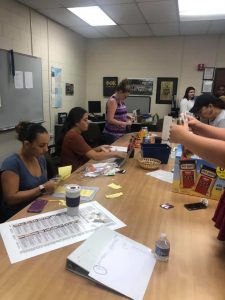 Outside of the service projects, Rutter credits Giunta for raising awareness about PTK on campus and becoming the voice of the organization.

“She has just taken the chapter to a new level in regard to campus engagement,” Rutter said. “Phi Theta Kappa is always there; it’s been there for 20-plus years. But one of the issues is trying to get student engagement.”

“Candice has taken many opportunities to broaden the level of expectation on campus,” Rutter continued. “Just creating a presence, putting the chapter and putting herself out there.”

For Giunta, being PTK president wasn’t just about serving others: It also played a role in her own personal development over the past year.

“When I returned to school, I was starting to forgive myself,” Giunta said. “I got involved in PTK and started moving forward and continued to move forward. It completely turned my life around when I realized I could use my past to help people.”

Giunta made another bold decision late in 2019 when she decided to run for PTK New Jersey State President. Working with campaign manager and PTK Vice President Nina Barone, Giunta created a poster board, t-shirts and literature she would use to help promote her story and her values at the election, scheduled for March 13 through March 15 at the 2020 Middle States Regional Convention in Galloway Township. She also began working on a two-minute speech she would give at the event. In the week leading up to the event, Giunta felt she was as prepared as she could be.

The COVID-19 pandemic changed everything.

At the last minute, the convention was postponed until a Zoom meeting set for March 28. In place of in-person campaigning, state president candidates had to conduct social media campaigns where they posted twice daily in the two weeks leading up to the event.

“It was so hard because I don’t know what more I could say,” Giunta said of the adjustment. “Sometimes, you just run out of words.”

Hi Middle States Family!!!I have talked about my past and I have expressed that my life wasn’t easy. I was in and out…

With the need to do frequent posts, Giunta left no stone unturned. She told her entire story, from being in the juvenile detention center to becoming a mother to her arrival at RCSJ and the revival she experienced along with it. She talked about her values and why they would help make her a good state president.

For the first time, Giunta’s whole story was up on Facebook for the entire world to see in a series of posts conducted over two weeks.

“I really think people related,” Giunta said. “Throughout the process, I was getting messages left and right from other people and colleges saying, thank you for sharing your story. Thank you for saying your past doesn’t define you.”

“She did it to inspire other individuals,” Rutter continued, “other students who may be in similar situations or different situations who can adapt their experience.”

On March 28, more than 200 people logged on to Zoom for the virtual Middle State convention. Even before the announcement of state president, Giunta received another accolade with the Hall of Honor Chapter Officer award, given  for her leadership and high-level involvement as a chapter president with PTK. It wasn’t until the very end of the meeting that the results of the election were announced and Giunta found out the big news.

“It was a very happy moment,” Giunta reflected about hearing she was elected as state president. “I was in shock. I am still in shock.

“I didn’t really expect to be a winner,” Giunta continued, saying many of the member schools are from North Jersey. “We’re from South Jersey. My school is not expected to have a state president.”

“I was ecstatic,” Rutter said. “We did it. She did it. It was amazing. There were a lot of people behind the scenes helping.”

Looking ‘Up’ heading into new position

A Disney fanatic, Giunta wanted to have a positive spin on her New Jersey State President campaign poster. She decided to theme it around the Disney movie “Up.”

“What better than to demonstrate going up,” Giunta said.

Her future is looking up as she settles into her new position as state president. Giunta hopes to use her term to further spread the word about Phi Theta Kappa and improve her leadership skills.

“This position is a huge leadership opportunity for us to work for things in our region,” she said. “We’re hosting meetings and trying to get students to continue their two-year college journey.”

Giunta currently maintains a grade point average of 3.85 and is scheduled to graduate from RCSJ in the spring of 2021. When she thinks about her entire journey and the new opportunities to come over the next year, Giunta goes back to the Adams quote and how all of the negative experiences from earlier  in her life have allowed her to be blessed with who she is today: a mother, wife, honors student, honor society chapter president and now, New Jersey State President of Phi Theta Kappa.

Museum of American History set to re-open next Thursday