The Cherokee junior had been through plenty of heartbreak in the South Jersey Group 4 championship during her first two years on the team. There was the upset loss at home against Toms River North in 2018, followed by a difficult defeat in 2019 at Lenape.

Last Monday, Therien and her teammates erased the demons of the past two years as the Chiefs downed Shawnee, 46-35. The win gave Cherokee its first sectional title in three years and most of the players, including Therien, their first chance to finally lift a sectional championship trophy.

“It was awesome,” Therien said. “I never had a feeling like it, to hold that thing up. The past two years, we couldn’t get it done. This year, to get it done, it’s such a good feeling.”

Therien added this year’s team entered the sectional final with a lot more confidence than the previous two seasons, citing the team’s tough regular season schedule as the perfect way to prepare for the playoffs. Cherokee’s season included non-conference wins over Moorestown Friends, St. Rose, Mainland and Wildwood Catholic as well as a perfect record in the Olympic Conference American Division.

“We had the confidence,” Therien said. “We know how to play in big games, we had a couple during the regular season. We just handled ourselves well.”

“It was definitely different,” sophomore Katie Fricker added about the team’s mentality. “Coming from last year’s loss … especially me and all the returning players, we wanted it so bad with how close we came last year to the trophy.”

In the season’s biggest game to that point, Cherokee’s top two players came together to provide most of the team’s scoring and defend against one of South Jersey’s best freshmen. A force inside on both ends of the court, Therien shut down Shawnee standout freshman Nia Scott last Monday, holding her without a point in the first half while scoring 11 points herself. When Therien got into foul trouble in the second half, senior Kennedy Wilburn, one of the few players left from Cherokee’s last sectional championship team, took over guarding Scott and also managed to score a few key buckets down the stretch. Wilburn led the Chiefs with 15 points in the game.

“She’s a really good player and, as a freshman, she’s just outstanding,” Wilburn said about Scott. “I knew I had to go on her because Alexa had four fouls. But I feel like it was a good matchup, because she’s really tough in the post and I think I can handle the post well.”

The turning point of the sectional final came late in the third quarter last Monday after Shawnee pulled within three points for the first time since the first quarter. In the period’s final two minutes, however, the Chiefs came alive, going on a quick 6-0 run to extend their lead to nine points.

“We’ve done it a lot this season,” said Fricker, who scored four of the six points during the run. “We’ve had to get our bigger lead back a lot in the third quarter. So going through that situation definitely helped with this game. We stayed calm the whole time.”

The smile on Fricker’s face as she went up for a layup with seven seconds left in the third quarter defined how the entire Cherokee team felt last week. One year prior, there was nothing but sadness and frustration on the Chiefs’ bench.

Last Monday, there was nothing but happiness and elation. 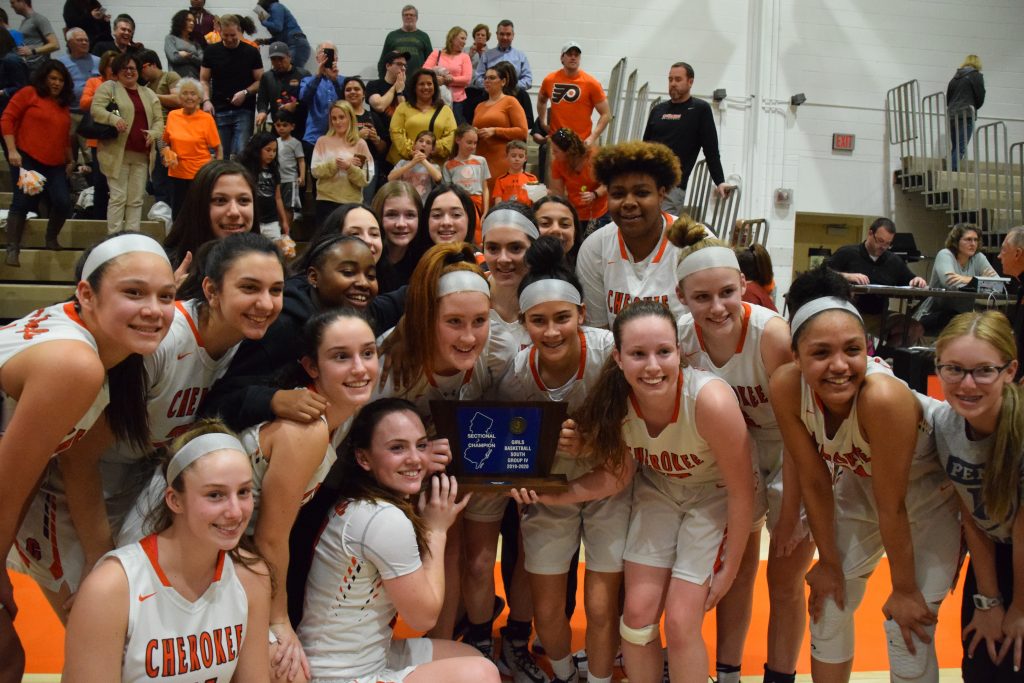