During the course of the season, there are games that stick out as highlights, turning points or milestones for a team.

A few days after one of those games, Camden Catholic’s Colin Merriman was still reveling in victory. The point guard knocked down two three-pointers en route to 10 points and fellow junior Zach Hicks collected a double-double (11 points, 10 rebounds) to lead the Irish to a thrilling, 46-40 overtime win over Bishop Eustace.

Merriman began his high school career at Eustace. He transferred to the Crusaders’ rival up Cuthbert Boulevard last winter.

“My first time back there and we won the game in overtime,” he said. “That was one of the greatest feelings I’ve ever had as a player, just going back, playing against old teammates. It was a lot of fun, a lot of fun.”

Rival bragging rights aside (the teams split two regular season contests), the competitive and intense games sprinkled throughout the Olympic Conference National Division schedule have both teams as prepared as any in South Jersey for the most important time of the season: playoffs.

While fellow Camden County Catholic school Paul VI looms as the top seed in the South Non-Public A bracket, with first-round action beginning on Wednesday, both the Irish and Crusaders are battle tested and eager to make a run for a championship.

The 11-team field includes top-seeded Paul VI, No.2 Camden Catholic, No.5 Bishop Eustace, No.4 St. Augustine, and No.3 St. Joseph’s (Metuchen), among others.

“You always like to be (the underdog),” Eustace coach Bob Falconiero said. “In the early season rankings, you don’t want to be too high; you want to work your way up. When you look at our bracket, it’s a bloodbath no matter where you go.”

Although Eustace boasts more state titles than their traditional South Jersey rivals in the field, its last came more than 40 years ago. You also have to dig a bit in the record books to find the Crusaders’ last South Jersey Non-Public A title, in 1997.

But after running through a schedule in the last two months regularly playing the likes of Camden Catholic, Paul VI, and the state’s top team, Camden, within its division, Eustace is confident it can make a run.

“Definitely,” senior David Cross said of a Eustace team that will take on St. Augustine in Friday’s quarterfinal game. “There are a lot of teams (in the bracket) that have a chance to win the whole thing. Our team, we have a lot of seniors. A lot of the other teams are younger. So with us, this is our last chance and we have to give it our all since it is our last chance.”

“We’ve been playing against all the top 10 teams in South Jersey all year long,” added teammate Matt McCaffrey of a Crusaders team that began the season 6-0. “When we’re really moving the ball, we’re tough to stop, pushing the ball up the court — that’s our game. When we’re in the flow, it’s hard to beat us.”

Although Camden Catholic has a couple of unexpected losses in the last few weeks — to Cherokee and Cherry Hill West — they also have something Eustace doesn’t have this season: a win over Paul VI. In a stark contrast of styles a month ago at Camden Catholic, the Irish’s deliberate and methodical half-court offense outlasted Paul VI’s run-and-gun in an overtime victory.

Despite losing three of its top scorers from last year’s sectional championship team, Camden Catholic is right back in the hunt for another.

“I’m extremely proud (of where we’re at),” Merriman said of a Camden Catholic team that will play the winner of Christian Brothers and St. Thomas Aquinas this Friday. “A lot of people had no hope in us to come in and do what we did last season. ‘They won states last year, but they don’t have it this year.’”

Camden Catholic proved otherwise. Now, like longtime rival Bishop Eustace, the Irish are eager to take the lessons learned in an unforgivable regular season into an unpredictable postseason.

“Every night can be a dogfight when you’re playing against teams (in our division) but it’s really fun, because it helps us get better for the future,” Hicks said. “And it helps you get better as a player, too.” 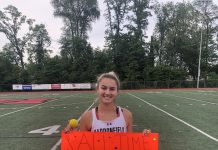 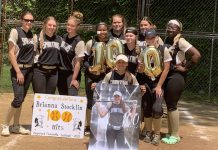