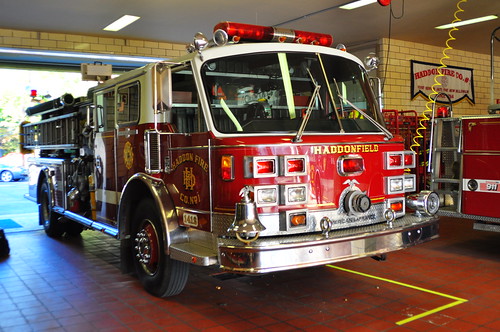 A celebration for the Haddonfield Memorial High School boys’ state-champion swim team was marred by a collision between a borough fire vehicle and pedestrian at a major downtown intersection on the night of Sunday, Feb. 23.

One day later, the Borough of Haddonfield issued a statement regarding the incident, which occurred just after 8 p.m. the previous night.

“The Haddonfield Police Department, in conjunction with the Camden County Prosecutor’s Office Crash Investigation Team, is investigating a serious motor vehicle vs. pedestrian collision that occurred on Sunday, Feb. 23, 2020.

“A 46-year-old female Cinnaminson resident was crossing Kings Highway East when she was struck by a Haddonfield Borough fire truck that was turning off of Haddon Avenue onto Kings Highway. The pedestrian was taken to The Trauma Center at Cooper University Hospital with serious injuries. The fire truck was not responding to an emergency at the time of the collision.”

In addition, Haddon Fire Company No. 1 issued a subsequent statement through its Facebook page later on Monday, stating:

“The Officers & Members of Haddon Fire Company are saddened to report that Squad 14 was involved in a pedestrian/motor vehicle accident last night at the intersection of Kings Highway & Haddon Ave. Units were detailed for a community service assignment to recognize the HMHS Boys Swim Team state championship. Due to the accident, our priority immediately shifted to the care and transport of the pedestrian and those involved.”

At a Feb. 24 board of commissioners meeting, Haddonfield Police Chief Jason Cutler said the incident occured prior to the fire truck parade, which has become a hallmark of honoring championships won by all borough sports teams. Earlier on Sunday, at The College of New Jersey, the Bulldawg swimmers topped Summit High School for the Group C title.

“This was prior to the celebration. The truck was supposed to go meet the team, but, unfortunately, due to the incident (the fire department) had to send another vehicle. They were on their way to meet the team at Scout Field to start the parade but didn’t make it,” he explained.

While the operator of the fire truck was not identified, Cutler added that he is understandably upset at what happened.

“The driver is extremely distraught … he is a volunteer, I’m not sure how long he’s been with us … but he was distraught that night, and even talking to him the next day, he was definitely in a bad way.”

While the borough’s initial statement did not provide an update on the victim, Cutler was able to offer a brief hint at the nature of her injuries.

“We’ve tried. We’ve actually talked to the victim’s parents, and they’re still saying that she’s in Cooper. She’s had surgery and they’re still waiting to see what the next step is. But she did have a pretty bad injury to her leg,” he added.

Futher inquiries made regarding the fire truck operator were unsuccessful.