It took a freezing lake to warm the hearts of a few local residents last weekend.

Over 200 people gathered at Lake Gilman in Mullica Hill last month for the 7th annual Polar Plunge to raise money for two local families with health and economic issues.

This year’s event — which took place on the afternoon of Feb. 22 — raised a record-breaking amount of over $18,000, according to co-organizer Henry Amanto. Every penny  will go to two local recipients, Harry Knorr and Neal Ewan.

Knorr, a lifelong Mullica Hill resident, was diagnosed five years ago with a rare mutation of Stage 4 lung cancer that metastasized to his brain. As a non-smoker, the 58-year-old was surprised at the diagnosis. He has been married for 35 years to his wife, Yvonne, and has two daughters, Jessica and Kristen.

Even after he was informed at his diagnosis that he had about a year to live, to this day Knorr and his doctors aggressive tackle the cancer. Treatments have included surgical procedures (including brain surgery), numerous chemo and radiation treatments, clinical trials and current immunotherapy. The money from the fundraiser will go toward medical bills.

“I’m humbled by the fact they did this for me,” he said of the Polar Plunge. “The people that organized, sponsored and participated are incredible. It’s great to live in a community that I have this opportunity.

“It’s been a battle and every day is a challenge,” Knorr admitted. “There’s no one I can thank more than my family, especially my wife and children, for getting me this far.”

Ewan, the other fundraiser recipient, is paying out of pocket to fix his family’s house after a tree fell on it over a year ago. His wife, Nancy, is the only source of income because Ewan has epilepsy and can’t work. They have two children.

The idea for the event started in 2014 when Amanto began caring for his father, who was in deteriorating health and had just gone into a coma. Amanto’s good friend, Dave Diehl,  offered to hold a polar plunge fundraiser, an idea he’d been sitting on given that his house was on a lake.

Each year Amanto and Diehl search for new fundraiser recipients in the local area. They vet each candidate through community outreach and word of mouth.

“I can’t say enough about it,” Amanto noted. “I look at where it was the first year, where people made and brought food, to now our seventh year, where everything is donated by local restaurants.

The event is catered free by several local restaurants, some of which have donated food since the second annual event, according to Amanto.

“Everybody came together and loved and enjoyed their time,” he said. “That, to me, is so amazing.” 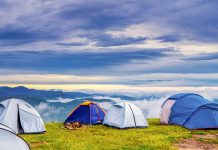