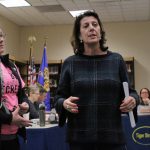 Teacher Heather Petersack and Lisa Egan provided snapshots on the two teachers’ ability to work with their peers and for the students (Krystal Nurse/The Sun). 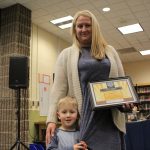 Maria Pote, with son Jackson, was overjoyed with appreciation and love for the honor bestowed upon her, commonly noted as a team player (Krystal Nurse/The Sun). 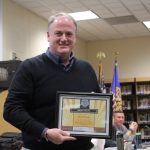 Third-grade teacher Michael Dunlea, as stated by his colleagues and superiors, seeks out innovative ways to teach students about the world around them (Krystal Nurse/The Sun).

A number of educators work day in and day out to provide the best education to their students.

Third grade teacher Michael Dunlea and seventh and eighth grade science teacher Maria Pote were recognized for that effort at a Feb. 18 Tabernacle Township Board of Education meeting to announce the district’s Teachers of the Year awards.

The two colleagues sat in the audience during the evening meeting at Olson Middle School and listened to words of appreciation for their work from Assistant Principal Shaun Banin.

“(Pote) has a consistent and positive attitude towards our students and life itself,” Banin read from a statement. “She helps create a school-wide positive culture that is seen every day in this building.

“She steps up to the plate whenever needed and does it with a smile, helping everyone she can along the way.”

Principal Sue Grosser’s statement on Dunlea read in part, “He puts his students’ needs at the forefront of his lessons and he works to bring innovative and real-world lessons to the classrooms.”

Colleague Lisa Egan, a special education teacher at OMS, remarked on the hard work the two teachers do for the district and the amount of effort they put into extracurriculars. Egan cited Dunlea’s tenacious efforts be an out-of-the-box thinker and to unite his peers under one mission.

Pote’s willingness to work with a number of after-school activities at OMS was noted by Egan, who said she was astonished at Pote’s ability to handle difficult schedules with ease.

“The kids love you and we love you,” Egan added, gazing at her co-workers. “Thank you so much; it’s an honor and a privilege to work with both of you.”

Colleagues remarked on the teachers’ willingness to participate in spirit days at Olsen and Tabernacle Elementary. Gifted and Talented/Imagineering Teacher Heather Petersack marveled at Dunlea’s ability to capture the emotion of audiences he’s presenting to and to foster an emotional connection to education and its impact on students.

“I listen to him during every presentation and bawl my eyes out,” Petersack noted. “It’s great to learn from him and be by him.”

Petersack said best friend Pote has been instrumental in promoting her success as a gifted teacher. Pote, who was Petersack’s mentor seven years ago, taught her the ins and outs of teaching, what do to and what not to do.

“She taught me how to take a step back and look at things in a bigger realm,” Petersack concluded.

“It’s always a smile or something, because you never know what that person had to do over the weekend,” Banin said. “They’re always going to be there for that kid, so they always have that positive influence and make sure they’re exposing (students) to things they might not otherwise have.

The sale of 180 Carranza Road (former home of Sequoia Alternative Program) to Friends of Cryus Partners II LLC for $850,000, effective May 5, was finalized at the February meeting. The school district, as Business Administrator Jessica DeWysockie stated, has agreed to pay closing costs and updates to the building, at a cost of $75,000. The $775,000 in revenue for the district will be placed in either maintenance or capitol reserves to address necessary repairs at Olson Middle and Tabernacle Elementary schools.

DeWysockie’s resignation date of April 29 — or earlier if an interim is secured — was accepted at the meeting.

Following questions from a parent, board member Gail Corey recommended the body address differences between practice and policy at the upcoming March 2 meeting. Bob Grimes, the parent of an unnamed student, had sought clarification from the board during public comment as he learned of the eligibility requirements — via a letter from Grosser —  for eighth graders in the various grade-specific activities.

Grimes took issue with the academic requirement, noting students may struggle academically despite their best efforts.