From tragedy to charity: Out of darkness, couple finds ‘Noelle’s Light’ 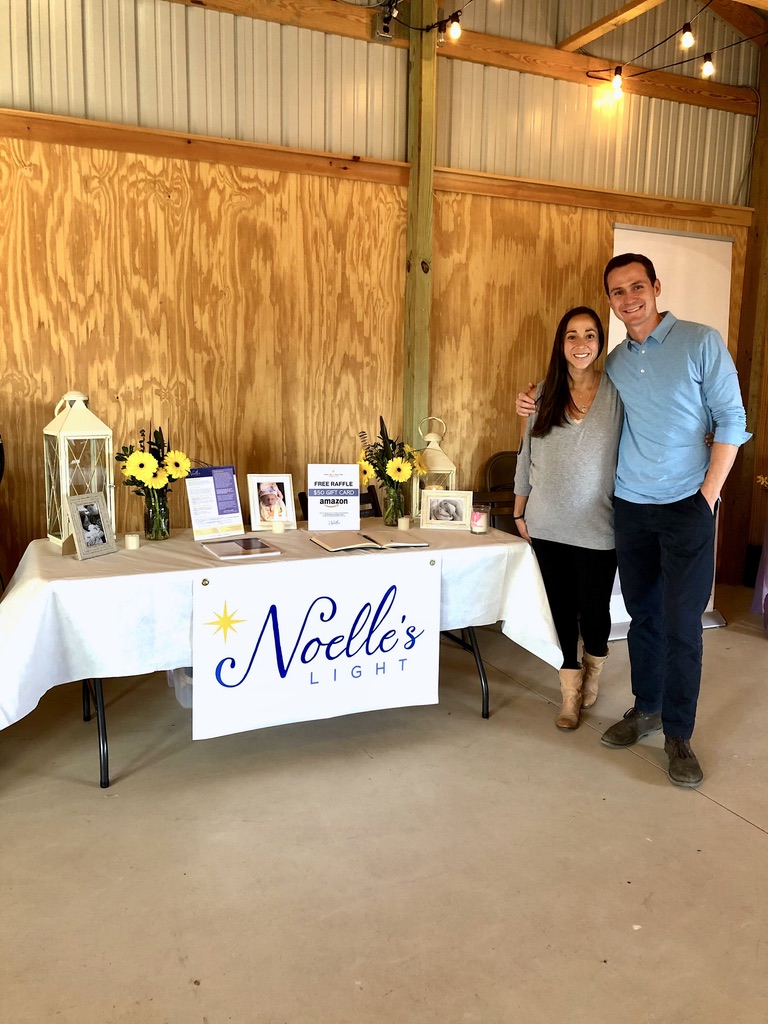 Twenty weeks into Jodi Laughlin’s pregnancy, she and her husband, Alex, received news from their doctor that no expectant parents would want to hear: There’s something wrong with your baby.

A few weeks later, their unborn daughter was diagnosed with Hydrops Fetalis, a rare  condition that causes abnormal fluid accumulation in at least two fetal organs.

After several procedures and an emergency C-section, Jodi gave birth to their first-born, Noelle. She was whisked away immediately so doctors could drain the fluid from around her heart, but after only 30 minutes, the baby passed.

“We knew even that day in the hospital — even after losing her — we knew that wasn’t the end of journey with her,” Jodi said. “We both looked at each other and knew we would do something one day.”

The Riverton residents have since transformed their grief into action by starting Noelle’s Light, a 501c3 nonprofit founded in their daughter’s honor. The Laughlins’ mission is to provide financial support to families dealing with a life-threatening fetal diagnosis.

They’ll hold their first fundraising event, Light Up the Night, on Feb. 27 at Tendenza in Philadelphia. The goal that evening will be to raise $75,000.

Jodi grew up in Cherry Hill before moving to Moorestown at age 12. She met Alex at Villanova University, and the pair married on Jan. 2, 2016. That May, Jodi learned she was pregnant, and by September, they learned something was wrong.

The weeks that followed were filled with testing, and once they received Noelle’s diagnosis, they were at the Children’s Hospital of Philadelphia (CHOP) two to three times a week. Jodi underwent three procedures to place shunts in Noelle’s left and right lungs and heart to drain fluid.

Jodi said those weeks were filled with highs and lows, with the fluid draining one day,  only to build back up the next.

“We would be really hopeful one day, then not so hopeful the next, so it was a lot,” Jodi recalled. “But I think throughout the entire journey, I never thought it would end the way it did.

“I always held on to that hope.”

At 30 weeks, Jodi thought Noelle wasn’t moving around as much, and something just felt off. She had a fetal heart rate monitor at home, and when she checked, the baby’s heart rate was normal. So they decided to hold off going to the hospital and waited for their scheduled visit the next day.

When they arrived, the doctors realized Noelle was in distress, and if they wanted to save her, Jodi would need an emergency C-section. At that point, her only concern was that Noelle not be in pain. The couple were prepared for Noelle to have a long hospital stay, but they never thought she would die.

At the time, Alex noted, they had an overwhelming combination of sadness and love for their daughter. He said deep down, they knew they weren’t just going to say goodbye and have that be the end of Noelle’s journey.

“I think when people go through any kind of difficult journey, especially in loss, they’re trying to find meaning in it; why did this happen?” Alex said. “I think that’s just a natural tendency for people to do.”

Throughout the experience, Jodi, a registered nurse, and Alex, who was working in commercial real estate at the time, had exceeded their paid time off and accumulated $7,000 in unforeseen expenses. Alex said while they were fortunate to work with understanding companies, to have a hospital a mere 20 minutes away and to face expenses unscathed, that’s not the case for many.

The pair lost Noelle on Dec. 13, 2016 and got involved with the March of Dimes in April of the following year. They raised almost $20,000 for the charity’s corresponding walk, with the money going to Hydrops Fetalis research.

Alex said the experience gave the couple a taste of fundraising and made them realize  they had quite a network at their disposal. In the fall of 2017, they had the idea for Noelle’s Light, an organization that would focus on families faced with a fetal diagnosis.

During the next several months, they developed their mission and business plans and filed for 501c3 status with the IRS. At the beginning of 2018, Alex decided to leave his job and devote his full-time efforts to getting their nonprofit off the ground.

They had their daughter, Lily, in March of 2018. While their lives were hectic and they were still waiting to hear back regarding their 501c3 status, the couple didn’t want to lose momentum. So they partnered with Philadelphia Ronald McDonald House and set up a fund earmarked for families dealing with a fetal diagnosis.

While the Laughlins couldn’t directly interact with families due to privacy regulations, they learned the fund helped 12 different ones dealing with a range of diagnoses. One family risked losing their home because the father had lost his job after taking too many days off  to be at the hospital.

The fund helped pay the families’ mortgages and utilities for a month, so they wouldn’t lose their homes. It also covered plane tickets for another family who had flown from Puerto Rico to receive treatment at CHOP; another family had funeral expenses covered after losing their child.

Now that they’ve officially received their 501c3 status, Alex and Jodi look forward to launching their direct to families support. They plan to have an online application that families in need can fill out to request funding. They also hope to re-establish their fund with Ronald McDonald and start one with CHOP.

The “Light Up The Night” fundraiser on the 27th will feature live music, food, cocktails and a silent auction, with the proceeds supporting the couple’s mission to help financially-distressed families dealing with a life-threatening fetal diagnosis.

“It’s really just going to be the culmination of all the hard work we’ve put into it; it’s going to be a celebration of Noelle,” Alex noted.

For the couple, it’s not just about the financial aspect: Their hope is that Noelle’s Light will show families they’re not alone. A situation like theirs can feel like a lonely experience when social media happily celebrates pregnancy with gender reveals and baby showers. The Laughlins plan to share the real-life stories of people dealing with a fetal diagnosis to show families are not alone and that there is hope out there.

“I think for us, seeing what started as grief and love turn into an idea to actually helping these families, seeing that progress has just been incredible,” Alex said.

The Light Up the Night fundraiser will take place from 6:30 to 10 p.m. Tickets are currently on sale and can be purchased at https://Noelle2020.givesmart.com. To learn more about Noelle’s Light or to donate, visit www.noelleslight.org.